What is the status of Marital Rape in India? 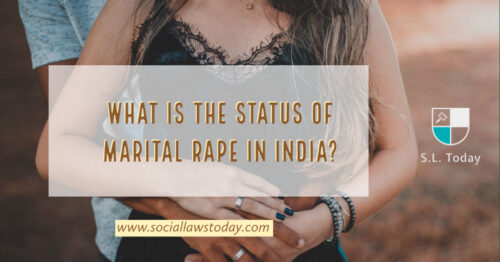 Marital Rape is the term used for the situations where Rape is committed by none other than the husband of the victim where her own mate forces her to indulge in the physical activities without even taking her consent.

No matter what she says and what she proof’s this remains legal just on the grounds or the mere condition that he is her legal husband, they both are married and now she is tied with him in the sacred bond which ultimately gives him the license to Rape her, sexually abuse her and to do whatever he thinks fit.

It’s her responsibility to prepare food for him and her duty to keep her husband happy by surrendering all her rights to the him which in the case of marital rape also act as a permission given to him to commit crime without asking.

People don’t take it seriously or conscientiously in our country because of the mentality we have that there cannot be anything existing in a married relationship like Rape as husbands are allowed to do so.

But, nobody thinks about the poor women who are living with that person, leaving her home, her family, comforting him always, prioritizing him, giving him all the support he needs to make the bond stronger. And if she denies or she is not ready to indulge in any sort of physical activity with her husband despite a clear and a big denial he forces her.

What will be the emotional condition or suffering of that woman having such pressure on her head where she is been molested, harassed, abused and raped? but the society calls it legal.

There is No recognition given to such type of crime in our Indian Penal Code which describes all the offences and prescribes the punishments decided for them.

In India where on one hand Rape is mentioned under section 375 of IPC making it a very serious offence against women and a genuine long punishment is decided for the same but on the other hand in the same section, an exception is also included which says – if a man enters into sexual intercourse with his wife above the age of 15 years then it won’t be considered as a crime.

There is nothing mentioned about consented or non consented marital sexual intercourse in section 375, sadly this is where our legal system becomes very biased.

What kind of justice is this with a lady in a democratic country? where we are much more into protecting and promoting womanhood, preventing crimes against women. It is covered beside the strong pillars of justifications making it more powerful. Only the path which is left for such victims is to satisfy her by filling the complaintfor any other crime under any other act.

India is among the 36 countries where marital rape is not recognized as an offence but somewhere supports it by not making it illegal.

on 2nd July 2019, the Apex court of India refuses to entertain the public interest litigation which was filed by lawyer Anuja Kapoor asking for proper rules and regulations to be made and also considering this as a ground for divorce, it was not even considered by telling her to approach Delhi High Court in this matter.

Taking a look at other countries where Poland made it a crime in 1932, Australia declared it as a legal offence in 1976 also South Africa, Ireland, Canada, U.S , New Zealand, Malaysia, Ghana concentrated on the depth of this crime and included punishments for this in their legal framework, so what is the reason behind taking it so leniently in our country?

Arguments or justifications for not giving it a legal status includes :

(a) if marital rape will be made as an offence then this can be highly misused by the women as it will become very difficult to identify and the evidences for the same cannot be collected , women will then have the power to use it in other ways and will make it as the ground for divorce, by this husbands will not be left to prove anything so it will become very much women supporting , examples given were of the ratio of the false cases filed under section 498A of IPC.

(b) it was said that these kinds of cases are very rare so requirement for a separate law is not there, it can be counted under many other strict acts made for the women safety such as domestic violence act 2005, sexual offences act 2003, she can also take her husband to the court of law for the wrong done by him under such laws

(c) this step if taken is presumed to be very dangerous in vanishing the true and outmost faith that the people have in the pure bond of marriage which is not only between two persons but is between two families according to the society we live in by quoting the women who are dependent on their husbands and are not that independent as the women living in the urban societies.

Rape is said to have a great impact on the mental, emotional and physical health of a woman only when she is unmarried but as soon as she agrees to get married all such effects are then not considered, why is this sensitive topic not given required importance? Where are our activists now? Are they okay with such kind of unethical practice going on?

Many of the debates have taken place before also as this is the major topic which comes in limelight and becomes the headline of every news channel for their TRP when one more similar crime happens but as the time passes this matter cools down and then nobody cares, only debating can’t bring a change in the law, in the legal system, it needs serious attention by the government, by the creators of rules and regulations, by the actual authorities who can bring this necessary change which is unquestionably required.

False cases are seen against many other crimes, especially 498A which talks about the punishment to be given to the husband or his relatives for their cruelty with the women, but that doesn’t mean we will stop recognizing crimes by just saying that a new act or a law can lead to abuse of that, if we are only considered about the misuse of law then why we are forgetting the loopholes lying in between the making of laws and executing them.

Treating married and unmarried women equally will help us more in stopping such evil practice as it is an unlawful act affecting the women at large rather than differentiating acting in unity will work.

Recently in a case, the Karnataka high court observed that rape is rape even if done by a husband. Also in one case, the Delhi high court gave a split verdict in a marital rape case.