What are the five types of Writ Petition? 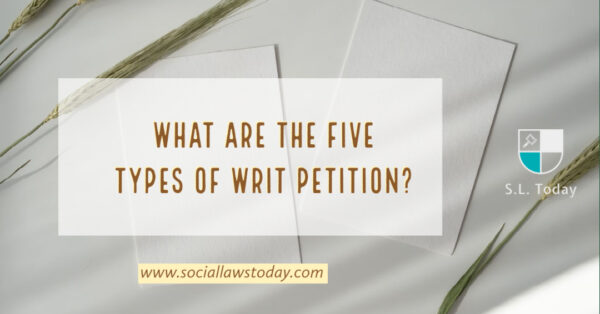 ‘INJUSTICE ANYWHERE IS A THREAT TO JUSTICE EVERYWHERE’

If any act of legislature or Executive takes away or limits any of the Fundamental Rights, you can challenge such laws of the Central or the State Government before the Court of Law.

Meaning of the Writ:-

A formal order under seal, issued in the name of sovereign, government, court, or other competent authority, enjoying the officer or other person to whom it is issued or addressed to do or refrain from some specified act.

In simple terms, writ is a formal written order issued by the government in the name of sovereign power to do particular thing.

The Article 32 and 226 give five types of writs called writ of habeas corpus, mandamus, prohibition, certiorari and quo-warranto.

Each of them has a different meaning and different implications.  Principle of Res judicate applies to writs except writ of Habeas corpus.

Habeas Corpus, that was derived from the Medieval Latin term which means ‘That you have the body’.   It was originated from the English legal system. The writ of Habeas corpus is known as the great and efficacious writ petition in all manner of illegal confinement.

It is to secure release from any form of unlawful detention.  After filling an application court examines the cause and legality of the detention.  It is considered as a most valuable writ for personal liberty (bulwark of personal liberty).  It also described as ‘A Great Constitution Privilege’.

The writ of habeas corpus can be issued against both public authorities as well as private individuals. Habeas corpus has certain limitations.  It cannot be issued in the following cases.

Article 22 of the Constitution provides four fundamental rights with respect to conviction.  These include being informed of the grounds of arrest, to be defended by a legal practitioner of his choice, prevention detention laws and production before the nearest Magistrate within 24 hours of arrest of the person. In case failure to do so would entitle the arrested person to be released.

Mandamus is a Latin word, which means ‘We Command’. It was first used by English Courts in the early Seventeenth century to the subordinate court, inferior tribunal, board or to any person for perform a public duty imposed by law in a proper manner.

Mandamus can be issued to any kind of authority in respect of any type of function – administrative, legislative, quasi-judicial, judicial. Mandamus is a command given by any High Court or Supreme Court to the lower courts to perform their public duty which imposed by law.

For example, when a body omits to decide a matter which it is bound to decide, it can be commanded to decide the same. Mandamus is called a ‘wakening call’ and it awakes the sleeping authorities to perform their duty[2].The writ of mandamus cannot be issued.

Certiorari is derived from Latin word which means ‘to inform’. The writ of Certiorari means to be certified.

The writ of certiorari can be issued by the Supreme Court or any High Court for quashing the order already passed by an inferior court or tribunal to transfer the matter to it or to some authority for proper consideration.

There are various grounds on the basis of which the writ of certiorari is issued:

Writ of prohibition means to ‘forbid’ (negative connotation) or stop.  It is commonly known as ‘Stay Order’.

Certiorari and Prohibition were issued only to judicial and quasi-judicial bodies. The writ of the Prohibition is issued to the inferior courts or tribunals;

A legal proceeding during which an individual’s right to hold an office or governmental privilege is challenged[5].The Quo-Warranto literally means ‘what is your authority’. To restrain a person from holding a public office which he is not entitled, Writ of quo warranto used to challenge public or corporate office.

For example, a person of 62 years has been appointed to fill a public office whereas the retirement age is 60 years.  Now, the appropriate High Court has a right to issue a writ of Quo-warranto against the person and declare the office vacant[6].

Having the Right to Remedies is crucial to uphold the ideals of democracy, freedom, equality and liberty[7].Dr. B. R. Ambedkar, who was the chairman of the drafting committee called the Article 32 of the Indian Constitution, ‘The very soul of the Constitution and the very heart of it’. Because, it gives rights to people to move Supreme Court directly for enforcement of their Fundamental Rights.

One thought on “What are the five types of Writ Petition?”