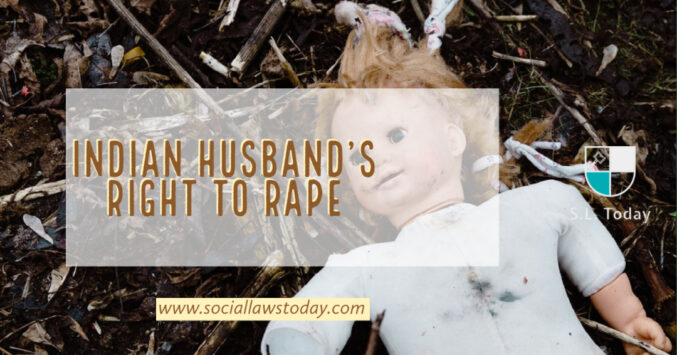 Marital rape or we can say spousal rape is the act of sexual intercourse between spouses without the other spouse’s consent. The most essential element of marital rape is lack of consent and it need not involve physical violence. It is considered one of the forms of domestic or sexual abuse. Marital rape is more widely experienced by women, though not exclusively. It is the most chronic form of domestic violence that takes place within a toxic and abusive relationship. Still in today’s society it is not considered a crime.

Well it was always illegal to have sexual intercourse without consent. It was not permitted for a man to have a force sex with any woman than his wife, a husband can have a force sex upon his wife, and there is no violation of any law until recently. They have their own justification for the marital rape. There is some exception:

According to British common law, marriage is a contract and ‘Right to sex’ comes under it. That means, a wife who enter into marriage will automatically give consent for sex and thus there is no marital rape. As traditional view has different concepts in regard to wives as they are considered chattels or property of their husbands. The common law not treated rape as a crime against women, but rather as a violation of a man’s property. According to these rape laws basically concerned with protecting a husband’ property interest in his wife’s fidelity, and a father’s interest in his daughter’s virginity. As husband could not take what he already owned that means he is not liable for raping his wife as he is the owner of that property.

The final common law for the exemption of marital rape was that, upon marriage, the identity of a wife merged into the existence of her husband. According to Blackstone marital unity doctrine ‘by marriage, both the husband and wife are considered as one person in law, the legal existence of the woman is suspended by the marriage, or incorporated into that of her husband. And she performs everything under his wing, protection and cover. This doctrine also provides that a woman could not own property, make contracts or take part in litigation. And this Doctrine made the rape of a women by her husband a legal impossibility by a stupid explanation that man could not rape himself

Public interest discourages the state from interfering in the marital relationship and promotes privacy and harmony in the relationships.

In Massachusetts was the first in US which recognises the term ‘contract’ and justified marital rape in the case Commonwealth v. Fogerty (1857), in which court clearly stated and relied on the assumption that a husband could not be charged with the rape of his wife. Under this the ‘Right’ was justified that the husband has right to sexual intercourse with his wife and it also provided a husband have ground for divorce his wife if she refused sex. And this defence became part of rape laws in every state.

State v. Rideout (1978) this was the first case of marital rape under which prosecution was allowed. In this case husband was acquitted of marital rape.

3.Trend towards Abolition of Marital Rape

In 1977 the Oregon legislature, following Nebraska’s lead in 1976,100 deleted the spousal immunity clause from its rape statute.101 This deletion allowed for the prosecution of husbands who engaged in non-consensual intercourse with their wives. A year later Oregon became the first state to prosecute a husband for raping his wife.

In the year 1977, the Oregon legislature, deleted spousal immunity clauses which were mentioned under its rape statute. This deletion of clauses meant to prosecute of husbands who engaged in non-consensual intercourse or we can say marital rape with their wives. A year later Oregon in the year 1977, following Nebraska’s lead in 1976, became the first state to prosecute a husband for raping her wife. In the case of State v. Rideout, John Rideout became the first husband in the United Nations to be prosecuted for the rape of his wife while the couple were married and living together. this is the landmark case which brought the issues of marital rape to the forefront on nation’s awareness.

The question that comes in every person’s mind is why a rape which only includes a term ‘Marital’ excludes it to be criminal offence in India. Well, India is one of the 36th country which decriminalized marital rape. Marital rape is a huge problem in India. 1 in 3 men admit to raping their wives, and 1 Indian woman is raped by her husband every 3 seconds. It is a crying shame that even after so many years marital rape has not been criminalized in this country. Section 375 exception 2 of the IPC,1860 violates the fundamental rights of people.

Decriminalizing marital rape violates an individual fundamental right. As Article 14 guarantees to a person equality before law and equal protection of law. our constitution guarantees equality to all, but at the same time Indian criminal law i.e., section 375 exception 2 of Indian Penal Code violates Article 14 and discriminate between men and woman by decriminalizing the marital rape in which female victims have to suffer a lot who is raped by their own husbands.

If we go to the history, Indian Penal Code was drafted in the year 1860, when women were treated as chattels and property of their husbands. They have no legal entity. According to the Marital utility doctrine the identity of a wife merges with her husband. The roots of this doctrine can be traced in the Victoria era. The definition of Rape under IPC was drafted on the basis of Victorian patriarchal norms. The marital exception under IPC is based on the “Doctrine of Coverture.”

In present, every individual has their own identity. Now the Indian law has also separated husbands and wife’s independent legal entities. Now the laws are framed to protect the women. The statute has been passed to protect women from violence and harassment. The laws are: ‘The protection of women from Domestic Violence Act’, “sexual Harassment of women at workplace (Prevention, Prohibition and Redressal)

Section 375 of IPC also violates Article 21 which states that no person shall be deprived of his life and personal liberty. In Suchitra Srivastava V. Chandigarh Administration in which the apex court held that right to make choices related to sexual activity with rights to personal liberty, privacy, dignity, and bodily integrity under Article 21 of the constitution.

Under Independent Thoughts v. Union of India The apex court criminalizes unwilling sexual contact with a wife between 15-18 years of age.

Rape is rape. Why India is unable to accept the fact that rape is considered to be rape whether a person is married or not. There are many misconception and misogyny about marital rape. The most important thing between a sexual intercourse is consent. Why it is so difficult for Indians to accept it. Some of arguments are mentioned below:

According to the Times of India reports, In August 2019, former chief Justice of India Dipak Misra said that “marital rape should not be made a crime in India, because it will create absolute anarchy in families and our country is sustaining itself because of family platforms which upholds family values”.

Neither the government nor the society of India accepts for criminalizing Martial Rape. As our society is of the view that once a woman is married, she hands over never-ending, complete sexual consent to her husband. But the laws are supposed to be ahead and above people’s prejudices.

The union government said “a law criminalizing marital rape can become as easy tool to harass the husbands”. It is mentioned under an affidavit submitted to the Delhi High Court.

Marriage is a pure bond between two souls on the basis of their mutual affection, love and respect towards each other. It is very difficult for a woman to adjust in an abusive relationship. And what can be worse when the perpetrator is her own husband. She is unable to express herself in front of anyone as marital rape is not considered as rape in Indian society as marital status decides whether the rape was criminal offence or not. Surprisingly forced sex in marriage is considered to be natural and normal. This is the pathetic reality of our society. A woman’s NO is not considered and her consent often ignored. We need a change in society, and the first step is to provide protection to women. Rape should be considered as rape irrespective of her marital status.