Legality Of Dying Declarations In Relation With The Hathras Case 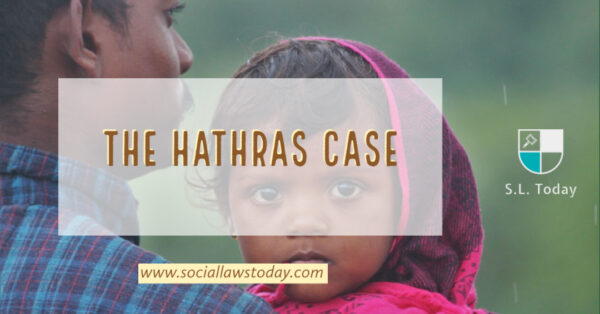 A dying declaration means the statement of a person who has died explaining the circumstances of his death. According to English Law, the statement is relevant only when the charge is that of murder or manslaughter.

The basis of the rule as to dying declaration was explained in the early case of R v. Woodcock[1], where it was stated that the prisoner was charged with the murder of his wife. Her statements as to circumstances of death were recorded by a magistrate. Death came 48 hours after this. She consistently had rationally repeated the circumstances of the ill-treatment meted out to her and she remained conscious till the last moment and did not seem at all to be aware of her approaching dissolution.

Under the Indian Evidence Act, 1872 Section 32 talks about the cases where the statement is made by a victim who is dead or whose question of death comes into the picture after the act is committed. The section is one of those provisions that provide exceptions to the principle of excluding hearsay evidence. The principle of the section is that a person who has the first-hand knowledge of the facts of the case, but who, for reasons stated in the section, such as death or disability, or is not able to appear before the court, then his knowledge should be transmitted to the court through some other person.

The section comes into play when the person whose statement is sought to be proved has died, or cannot be found, or has become incapable of giving evidence or whose attendance can be procured at an amount of delay or expense which under the circumstances of the case appears to the court to be unreasonable. Proof of these facts will have to be offered in the first instance to make the evidence relevant.[2]

Thus, if the ground of relevancy is the death of the person concerned, his death must be proved, for if he is still alive, he must appear in person.

Section 32 goes on to enumerate clause by clause the cases in which and purposes for which such absentee statements can be cited in evidence.

BACKGROUND OF THE HATHRAS CASE

The incident took place on 22nd September 2020, where a 19-year-old girl of Hathras, U.P., was brutally made victim of sexual assault i.e., gang-rape. She was found half-dead in the millet fields where the victim and her mother were farming.

The police is said to have not taken any immediate action on this act of the perpetrator, further, she was also not admitted to the hospital and was referred to Delhi hospital immediately as her medical condition was deteriorating. Her medical report said that she had bruises all around her neck and wasn’t able to speak much as there was a big laceration on her tongue.

On the inquiry by police officials, she said that the attackers tried to throttle her because she was not letting them do fun out of her body. Since, the victim and the family belonged to lower caste family therefore they were afraid of using the term ‘rape’, as it is meant as ‘dirty work’ for them. In spite of this, they explicitly said that the victim was subject to ‘Zabardasti’, and such act was committed by their neighbour who belongs to an upper-caste family.

The victim, for two weeks, was fighting for her life and justice to what had happened with her. But she couldn’t keep body and soul together and on 29th September 2020, she took her last breath. The investigation went on for long and many police officials were suspended.

LEGALITY OF DYING DECLARATIONS IN RELATION WITH THE HATHRAS CASE

While the Hathras victim was in the hospital, she bravely recorded her statement before the magistrate after 8 days of the incident.

Under Indian Evidence Law, this statement of hers is known as ‘dying declaration’, which is admissible under the law to establish that the incident caused the death of the person. Or, we can say that such statements are admissible because they are subjected to the question of the death of the victim.

She gave her statement where she reported that there were 4 perpetrators who gang-raped her and brought her in such critical condition. This is the case of ‘Justice delayed is justice denied’, because there was a major delay in admitting the girl to the hospital for the treatment.

Therefore, for further investigation, her forensic analysis was done 11 days after the incident, which further made the forensic report hold no value in the eyes of law.[3] Not only this, but the post-mortem report of the girl stated that there were no remarks which show that rape has occurred. It just showed multiple old, healed tears in the victim’s body. But the victim’s last statements hold a significant value in the eyes of law in proving the guilt of those who were part of this act.

The Supreme Court in the Nirbhaya Case has over and over again held that dying declarations are an impression which is registered in the mind of the victim after the happening of any such grave act and are therefore considered to be true and voluntary and not tainted with animosity.

Therefore, the victim of hathras case made a dying declaration which was not mere imagination but rather a harsh reality which she faced, forming a sole basis for conviction of the accused. Her words must be heard during the trial and is subject to get Justice. May be or maybe not, even if it is proved that she was not subject to rape then it must be proved that what caused her face death?

# Legality Of Dying Declarations In Relation With The Hathras Case

[…] Hathras, was the sensation back all these days for all bad reasons. A district, once better known for its Puranic history and folklore, stuck Indian citizens in awe. Interestingly the mayhem regarding which this place was in headlines, was due to the malfunctioning of the entire state machinery and had nothing to do with the place per se. The actual disgust arose out of an alleged heinous crime, but still enervating was the way the case was handled. A lot went through after the days of proceeding the incident. But still inching upon the issue is the conundrum – what keeps the caste system virile?  […]