WHAT IS SECONDARY EVIDENCE IN INDIAN EVIDENCE LAW? 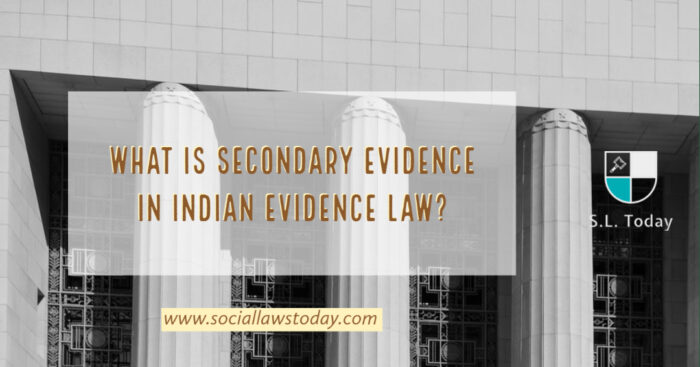 Under the Indian Evidence Act, 1872 the documentary evidences which are directly produced before the court are known as the ‘Primary Evidence’ and these evidences are categorised as the best evidence. The best evidence rule means by proving a document is the document itself. But there arise certain cases where the original document is lost or destroyed. In such cases, the Evidence Act tenders the copies of original documents as the Secondary Evidence. It is defined under section 63 of the Indian Evidence Act, 1872 and is permitted to be produced before the court in the form of summary of the original documents.

Further, in this article we will analyse the concept of secondary evidence including all the sections which it covers in the Indian Evidence Act, along with the relevant case laws.

Section 63 of the Indian Evidence act defines ‘secondary evidence’, where clause (1) to clause (3) deals with the copies of the document. This particular section is exhaustive when it comes to the types of secondary evidence admissible under the Act. However, to make the it admissible, it is necessary to provide a reason for the non-production of the original document. For e.g. Tenant file Xerox copy of money receipt in his plea without giving proper reason and Xerox is authentic then it will be not admissible. The different sections of the Act deal with the different types of the secondary evidence.

In this case the bench of J. R.F. Nariman, J. S. Ravindra Bhat and J. V. Ramasubramanian held that, section 65B (4) of the Indian Evidence Act, 1872 requires a certificate for the admissibility of evidence by way of electronic record and is considered as the condition precedent.  The same was held in the case of Anvar P.V. vs P.K. Basheer and was criticised by the division bench in the case of Shafhi Mohammad vs State of Himachal Pradesh, the Court in this case further clarified that the rule under Section 65B (4) is not necessary if the original document is produced in the court.

The last sentence in Anvar P.V. Case is read as follows-

“…. If an electronic record as such is used as primary evidence under section 62 of the Evidence Act….”

The court clarified the above-mentioned sentences and said that, Section 65-B (4) is not necessary if the original document is produced before the court. This can be proved by the laptop/computer owner where the original information was stored and was operated by its owner. In cases where it becomes impossible to bring such a system or network before the Court, then the electronic evidence can be produced in accordance with Section 65B (1) along with the requisite certificate.

The Court also stated that, Section 65B applies to the cases where certificate as to the admission of the secondary evidence is to be procured by the person who relies upon an electronic record. And, also states that such certificate must accompany the electronic record when the same is produced as an evidence before the court of law.

To conclude with the topic, it is clear to us that section 59 of Indian Evidence Act when read with Section 67 to 73 of the Evidence Act gives the proof of genuineness of any document. So far as the rules of Secondary Evidence are concerned it is embodied in Section 61 to 66 of the evidence act. When the genuineness of any document is to be proved, considering oral evidence and its contents is an important requisite and to prove an oral evidence, adducing primary and secondary evidence is another important requisite which is to be fulfilled.

An instrument which is chargeable to duty, if it is unstamped or insufficient stamped is required to be impounded first. Unless, it is impounded it cannot be admitted as evidence. Such document is not of any use unless impounded or requisite stamp duty is paid.