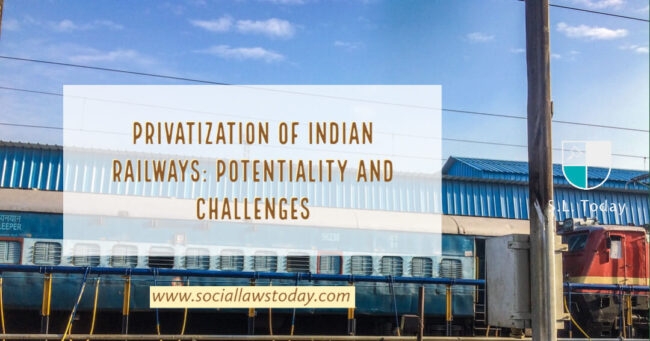 Recently, Finance Minister of India, Nirmala Sitharama has allocated 1.7 lakh crores for improvising the connectivity of Indian railways in Budget of 2020 and enlightened various measures for improvising the operations of railway networks in which announcement has been made regarding public-private partnership in Indian Railways. In 2016, 93 years old practice of introducing separate rail budget from the general budget has been ended on recommendations of NITI Aayog headed by Bibek Debroy and again Indian Railway is on the edge of taking a new turn by introducing private partnership in monopoly of state. It is one of the ‘masterstroke’ by the Government which aimed at providing world-class travel experience by introducing Private Partnership in Indian Railways and increasing its connectivity which would help to connect to iconic tourist destinations in India. The Request for Qualifications (RFQ) has been invited for operation of passengers’ trains by private operators on 109 routes with 151 modern trains. The project will entail 30,000 crores investment which would bring modern technology rolling stock along with reduce maintenance and transit time along with a solution of unemployment issue in Modern India.

The railways are enlisted in the 7th schedule of union list under which Parliament of India has special authority to legislate as Indian Railways. It  is one of the largest and busiest rail networks in the world, transporting six billion passengers and 750 million tonnes of freight annually with 13 lakh human resources working under them. Indian Railway comes under the ambit of Union list as it has a major impact on the revenues of our country as well as it needs huge investments. Prior to Independence, it had mere 42 trains but with passage of time it has developed into a fourth largest railway network in the world after USA, Russia and China with tracks covering 120,000 km of the country. Indian Railways come under the list of top 10 employers of the world as it offers many benefits to its employees along with job security until retirement such as significant rise in salary, benefits of grade pay, dearness allowance, free railway travel pass for one round trip in an year, free medical facilities to employees as well as to their dependent(s) in railway hospitals, study leaves for higher studies, residential quarters with all basic facilities at nominal price, admission opportunities for children of employees in education institutions set up by Indian Railways and subsidized meal at railway canteens for employees. People often choose railway over any other form of transport as it is economical, regular, safer, certain and more dependable with large carrying capacity.

The major challenge before the private sector is to satisfy the people working under them in Indian Railways as the government has given all possible advantages and perks to its employees due to which many students in large numbers appear in Railway Recruitment Exam every year. While it is true that Indian Railways deserve the credit for serving the largest democracy in the world, it has also been at the receiving end of some criticism, especially in case of aspects like regularity, services and catering. It has not been able to keep pace with modernisation of its infrastructure and services. Indian railways have not succeeded to expand at a pace that Modern India seeks. On the technical side, it lacks in providing proper services like track laying, signal and transmission, engine and coach design and manufacture. Privatising Indian railways will lead to better infrastructure which in turn would lead to improved safety and reduction in travel time along with solving issues like lack of punctuality, mismanagement in the form of stinking washrooms, lack of clean water supply and dirty platforms. Irrespective of these advantages, it will also help in accommodating the latest technology in railways coaches as it will foster competition. Currently, train coaches require maintenance after every 4,000km but we can expect due to advancement in technology after privatisation such issues shall be overcome and the call for maintenance would be required after every 40,000km with modern coaches. Like every other private enterprise, privatisation of Indian Railways would need to raise capital from other sources as well in order to meet the huge capital needs of Indian Railways which would create pressure on them to perform efficiently which lacks in state-owned firms.

When we analyze the future of Indian railways, we can’t ignore the work done by the government in these years to improve connectivity in order to bring regional development which would not be possible with privatisation since less popular routes may get neglected having a negative impact on connectivity and profits. It may render some regions like Himalayan states or North eastern states virtually inaccessible and completely omit them from the process of development. Since private enterprises focus on profit maximization, the easiest way for them could be hiking fares which will straightaway defeat the purpose of the Indian Railways which is meant to serve the entire population of the country irrespective of the level of the income. It will also harm the interest of marginalised communities like scheduled castes, scheduled tribes and other backward classes whose jobs are reserved in government owned sectors. Not only this, it would also render thousands of employees in production and ancillary units jobless in the long run. We can’t ignore the fact that Private companies are unpredictable in their dealings as they are profit oriented and they usually avoid investing in long term projects unless they don’t guarantee huge profits.

According to the survey of American Aviation sector, privatisation may not be the answer to solve problems plaguing the Indian Railways. Maybe the need of the hour is to find a balanced solution that would incorporate pros of both private and government enterprises along with enhancing the image of Indian Railways as it continues to serve the world’s largest democratic country. Privatisation of railways operations will require a new institutional structure where infrastructure will remain as a government’s monopoly while there would be a market of service providers. No doubt, it is important to sustain growth and modernise the railways in order to efficiently allocate the resources and upgrade facilities but the better way forward is to corporatise the core railways functions as it will restructure the Indian railways. The non-core functions of railways including catering, operational hospitals and schools, real estate developments, construction and maintenance of infrastructure, coaches, wagons and their parts must be privatised. As witnessed in the last many years, the private sector has always considered customer needs as a vital element of business operations and constantly focused on implementing a customer service improvement plan in order to remain on top. At the same time, railways need to remain affordable as an infrastructure for daily commuters. Indian railways must redefine its roles and responsibilities by completely repositioning its operating role from being a service provider to being a supervisor of services. Instead of speeds and privatisation, efficiency and affordability should remain the primary focus. Given these steps are taken in order to enhance public-private partnership, it would not only make Indian railways the largest but also the most efficient railway network in the world along with materializing the very objective and essence of Indian railways –“Lifeline to the nation”.