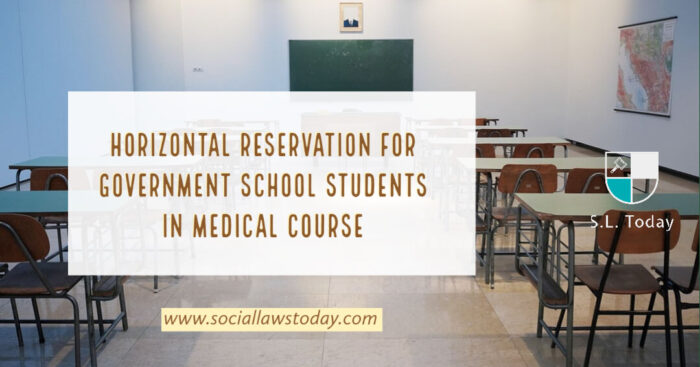 The article shall make reference to horizontal reservation needed in medical colleges in order to secure a level playing field in terms of opportunity in education to government school students. This aspect of reservation has been lately, the cynosure of social activist eyes. The reservation in promotion has been a long drawn battle and courts on this point, have enumerated various judgments.The following article shall keep at bay, the legal aspects of the rulings pronounced and focus more on whether social justice would be attained if such reservations are provided. Horizontal reservation for government students, has entered limelight following an ordinance passed by the Tamil Nadu government, whereby, the state has made provision for 10 per cent horizontal reservations in medical colleges to be secured to student enrolled in government run schools. The main premise under which the ordinance has been promulgated is that the admission of government school students in medical colleges after the backdrop of NEET, are at astoundingly negligible levels as against the number of students enrolled in government run schools.

Before moving on to the aforementioned topic of interest, the article shall, in brief, describe the concept of affirmative action. For a 1000 years, certain group of people who belonged, to what is considered as backward class, where subjected to oppressive behavior, thereby denied education and were confined to low cadre jobs, on the basis of birth. The top echelon of any sector be it the judiciary, bureaucracy,etc. had been dominated by people of forward caste even though the majority of the population comprised of socially disadvantaged class of people[1]. It was in order to counter the prolonged years of discrimination and provide representation and recognition to such people, was the idea of affirmative action born. It is true that reservation cannot be termed as a substitute to comprehensive societal changes, as the latter holds the panacea to the disease of caste in India, the only problem being, vaccines for diseases, be it the covid-19 or caste takes time to develop while lives are lost. Reservation holds an important place in contemporary times, as they facilitate education and promote representation and dignity of the backward classes.

This section of the article shall narrow down its focus on representation of students of government schools, enrolling in medical colleges in the state of Tamil Nadu. This section shall particularly focus on an ordinance which has been promulgated by the state, but yet to come into force on the date of submission of the article as it stands governor’s scrutiny. The ordinance seeks to create a horizontal reservation of 10 percent in medical seats for government school students. Off late, there has been vociferous clamor for providing such reservation as with the advent of NEET, the proportion of government school students securing medical seats had gone down from 34 in the year 2016 to a mere 14 students enrolling for the cumulative years of 2017,2018,2019 in Tamil Nadu[2]. The article shall take the Tamil Nadu scenario as example and shall critically analyze the same.

A small backdrop of the ordinance is in order, to understand the topic better. The ordinance passed by the Tamil Nadu government is the first of its kind in medical field and follows the footsteps of national law universities which provide reservations based on the domicile of the student. The ordinance was not a surprise move played by the government; rather there were prolonged talks on bringing about legislation to benefit the students of government schools since the starting of NEET exams in the year 2016.

Also Read: SECTION 144 THROUGHOUT INDIA: JUSTIFIED OR NOT

The government had instituted a committee headed by P.Kalaiyarasan, a retired judge of Madras High court in March[3]. The report had underscored the existence of cognitive gap between the two groups[4]. The newspapers reported that the committee had undertaken an extensive in depth empirical study before arriving at the conclusion that about 85 percent of students enrolled in government schools are from families of daily wage earners.

The committee based on its report, advised the government, that reserving seats for government school students would be the right away forward to create parity among the two groups, thus ensuring a level playing field. The committee had left it open for the government to decide the quantum of reservation. It was then, decided to be fixed at 10 percent. Such reservation are the need of the hour as most professional courses nowadays, have an all India competitive entrance examination, be it law or medicine, in order to secure seats in colleges. The committee report had used the term cognitive gap, suggesting that students enrolled in the CBSE stream of education holds a higher ground against the other group, when it comes to competitive exams such as NEET.

The move of the government has been a well-intentioned one while looking at the statistics available, which shows that out of 3,350 medical seats in state run medical colleges; only 14 have gone to government school students[5]. From the data available on Tamil Nadu, which ranks 4 in terms of literacy rates[6] among states(excluding union territories) it is fairly easy to extrapolate the conditions of government school students in other states too. The condition would be more or less the same. To remedy the existing situation, the governments at the states can use horizontal reservation system to provide equal representation in fields of all professional courses, where representation of government school students are not adequate..

However good intentioned the move is, the question of whether such horizontal reservation shall stand the test of legal scrutiny by courts of law hangs by a thin thread. The reason being the guidelines laid down for reservations. A horizontal reservation has to be supported with strong quantifiable data. Retired Justice Chandra had been reported by The Indian Express[7], as having expressed concerns over the validity of such legislation as the government needs a strong supporting data and raised red flags on the basis of which reservation is being made.

Affirmative policies of India have been in place ever since the independence of India from the British raj. They have been enshrined under the constitution. Yet, the backward class which constitutes the majority of the populationis not adequately represented. 72 years since independence, the representation of SC and ST in power and lucrative jobs in certain sectors, are still as low as 3 percent. The Modi led cabinet in 2014 comprised of a total of 24 ministers. Out of 24, 12 were Brahmins, 5 were from OBC, 2 and 1 from SC and ST[8].

The total population ofBrahmin is estimated to be at around 5 percent[9] (2007). The rulings of the court in India have made it absolutely clear, that reservation cannot be claimed as a fundamental right but the constitution imposes an obligation on the state to ensure that all classes of people are sufficiently represented in all sectors, to ensure an atmosphere of parity among different classes.

The onus is on the governments to undertake collection of quantifiable data in respect of providing reservations to those communities that lack representations. The case of government school students not being able to secure seats in professional courses and the existence of cognitive gap between the private school and government school students, points to the inadequacy in the educational system of India.

The entire blame cannot be shifted on government run schools by saying they do not provide quality education, as various other factors such as parental education, income, environment, easy access to schools also play their part in contributing to the cognitive gap. Thus, social disparity due to years of oppression has also had their toll on the widening cognitive gap. The ordinance of the Tamil Nadu government is a step to bypass the cognitive gap; in other terms it is a medicine to treat the symptom rather than the disease. Never the less, such measures is the need of the hour, in order to ensure the upliftmentof the socially backward class.

We live in times where the notion of caste with each generation, is becoming a feeble idea. Yet, the end of caste and its allied atrocities are nowhere to end soon. It cannot be denied that a lot has changed from what it was a thousand years ago to be born as a Dalit, then what it is today. We live in times where the president of India is from a Dalit community, but at the same time we should not forget the president of India, Dr.RamNathKovind, was denied permission for a brief moment into the Jagannath temple in Orissa[10] (even though certain newspapers claim it to be hoax). Reservations cannot be a substitute to comprehensive societal change on how caste is to be seen. This and this only shall create immunity within society from the disease of caste spreading and thereby putting an end to it.

Practice these ten responsible pet care tips 12
months after 12 months for a lifetime of happy and healthy cats and canines.