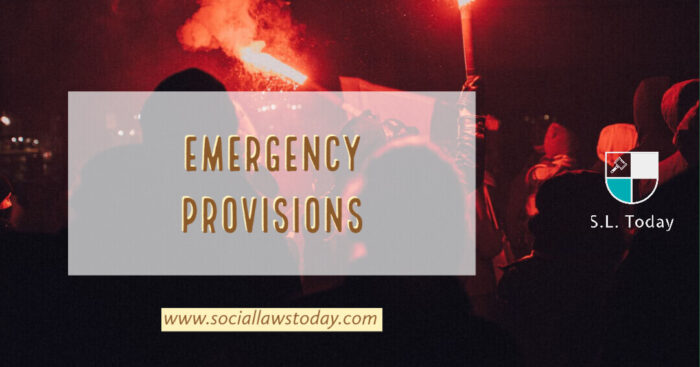 Emergency Provisions are contained in Part Eighteen of the Constitution of India. The President of India has the power to impose emergency rule in any or all the Indian states if the security of part or all of India is threatened by “war or external aggression or armed rebellion”. The Fifth Assembly was constituted on 15 March 1971 after the General Elections held in March 1971. It consisted of 234 elected members of which 42 seats were reserved for Scheduled Castes and 2 for Scheduled Tribes besides one nominated member. Before the expiry of the period of the Assembly, the President by a Proclamation issued on 31 January 1976, under article 356 of the Constitution, dissolved the Fifth Assembly and imposed President’s Rule for the first time in Tamil Nadu.

Three Types of Emergency Under The Indian Constitution

Black law’s dictionary defines emergency “as a failure of social system to deliver reasonable conditions of life”. The term emergency may be defined as “circumstances arising suddenly that calls for immediate action by the public authorities under the powers especially granted to them”. Dr. B.R Ambedkar claimed that the Indian Federation was unique as during the times of emergency it could convert itself into an entirely unitary system. In India, the emergency provisions are such that the constitution itself enables the federal government acquire the strength of unitary government whenever the situation demands. During such urgent needs all the pacific methods should be exhausted and emergency should also be the last weapon to use as it affects indias’s federal feature of government. There are three types of emergencies under the Indian Constitution namely- National Emergency, Failure of constitutional machinery in state, Financial Emergency.

Article 352 of the Indian Constitution talks about the national emergency. National emergency is imposed whereby there is a grave threat to the security of India or any of its territory due to war, external aggression or armed rebellion. Such emergency shall be imposed by the president on the basis of written request by the council of ministers headed by the Prime Minister. When they are satisfied that they are satisfied that there  danger.

Every proclamation is required to be laid before each House of Parliament, it will cease to operate after one month from the date of its issue unless in the meantime it is approved by the parliament, the proclamation may continue for a period of 6 months unless revoked by the president. For further continuance of emergency the resolution has to be passed by either house of parliament by a majority of not less than two-third members of the houses.

National emergency has been imposed thrice in the country- in 1962 at time of Chinese aggression, in 1971 during the indo-pak war, in 1975 on the grounds of internal disturbances.

FAILURE OF CONSTITUTIONAL MACHINERY IN STATE

Article 256 talks about the failure of constitutional machinery in state also known as the President’s rule. If the president on Governor’s report or otherwise is satisfied that the situation has arisen that the government can’t be carried in accordance with the constitutional provisions then, he may issue State emergency. President can declare emergency either by the report of Governor or he himself is satisfied that the situation is such that the emergency has to be imposed. But at times, President may declare emergency when a report is not received from the governor. This was done by President Venkataraman in 1991 in the state of Tamil Nadu even though he didn’t receive a report from the governor. After the 42th Amendment of the constitution the state emergency was made immune from judicial review. But later in the 44th Amendment the legality of President’s rule could be challenged. The proclamation relating to state emergency shall be laid before each House of Parliament unless both Houses approve it, the emergency shall cease to have effect after the expiry of a period of two months. Further the duration of proclamation can be extended to 6 months each time by both Houses of Parliament passing resolution approving its continuance. Beyond the period of an year the proclamation can only be continued if the Election Commission certifies that it is not possible to hold election in the state or that territory. The consequences of state emergency are-

The High court of the state functions independently. President also proclaims ordinances in the state.
In Rameshwar Prasad V. UOI AIR 2006 SC 980, (Bihar Assembly Dissolution Case) it was held that the presidential proclamation dissolving state assembly in Bihar under Art.356 was unconstitutional on extraneous and irrelevant ground. The court said that the state governor misled the centre in recommending dissolution of state assembly.
In the historic case of S.R Bommai V. UOI, AIR 1994 SC 1918, a full bench of the Karnataka High court produced different opinion about the imposition of the President’s rule in Karnataka, while in other states the court held that it was in violation of the constitution and would have restored the original position.

The president under Article 360 of the constitution has the power to declare financial emergency if he is satisfied that the financial stability or the credit of India or any part of its territory is threatened. It has to be laid before both the Houses of Parliament and ceases to operate at the expiration of two months unless meanwhile approved by the resolution of houses.