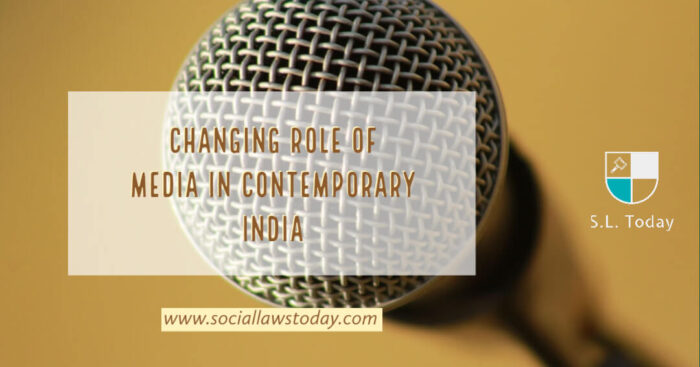 “One of the objects of a newspaper is to understand the popular feeling and give expressions to it, another is to arouse among the people certain desirable sentiments, and the third is the fearlessness to expose popular defects” – Mahatma Gandhi

Indian Media has been a part of freedom struggle and it is still somewhere fighting the battle against freedom, the difference merely being that the war of the freedom of press elated as the need for ‘Independence of the nation from the British rule’, and today it is on the war for ‘authenticity, fairness, and non-arbitrariness’. The technological breakthrough of the media today had once undergone massive set-up struggle, and has defined, redefined, and diluted the meaning of ‘Freedom of Press’. There has been a major shift in the laws for the press, rights of the press, and responsibilities of the press. Even though ‘truthfulness’ and ‘righteousness’ has been the agenda of the media, the sea-change of decades defines the changing role of Media.

From the struggle of licensing in the early 18th century, where the introduction of the Indian Penal Code, 1860 that defined the offenses such as defamation and obscenity rose the responsibility of media. And the press during the WAHABI conspiracy leading to the incorporation of sedition laws, further leading to the struggle against Newspaper(Incitement to Offenses) Act, 1908, Indian Press Act, 1910 and Indian States (Protection against Disaffection)Act, 1922, which proved to be lethal against the liberty of the press. Independence even brought freedom of speech and expression to the media but the Emergency (June 1975)  with the introduction of censorship proved to be a major setback against the rights of Indian media.

The battle did not just stop here, today we are still fighting against money, power, and position, and this freedom of printing media makes India one of the most liberal countries of the world when it comes to the freedom struggle of media specifically, making us win some battles and lose some. Introduction of RTI Act, 2005, various legislations passed, and after a plethora of judicial pronouncements we can rightly understand the undergone drastic change of media. This article aims to describe different parts portrayed by the Indian Media, what position it has gained, where it is leading, and what is supposed to be the way forward.

Media during War of Independence:

Arthashashtra (C.324- 300BC) mentions punishment for spreading false rumors and the use of rocks edicts for official announcement during Babur’s reign describes the presence of pre-typographic news period. Print media in action since 1780, radio broadcasting in 1927, and the screening of Auguste and Louis Lumiere moving pictures in Mumbai (then Bombay) initiated during the July of  1895, gave birth to print media despite yet being no pre-censorship nor licensing. It is among the oldest and largest media in the world. Earlier back in 18th century, when British brought printing press in India, they also brought the first legislation on the press in 1876 called Vernacular Press Act, which had put restrictions on the press to print papers in vernacular languages, however, a Bengali newspaper “Amrit Bazaar Patrika” published by Shishir Kumar Josh and Motilal Josh changed itself to the English language overnight to save itself from restrictions which came as a sudden jolt to the Britishers.

In the pre-independence period, Britishers, with the aid of, Government of India Act restricted the media to publish anything against the emperor’s and British rulers, and if they did then their right to press would be confiscated. But, the Indian media retaliated and rather served as an important tool in the Independence movement. Many leaders came up with their own newspapers to spread awareness like ‘Young India’ and ‘Harijan’ by Mahatma Gandhi, ‘Kesari’, and ‘Mahratta’ by Bal Gangadhar Tilak, ‘Naujawan’ by Bhagat Singh, etc defining how print media played an important role in conveying anger of the freedom fighters who used ink as a weapon to fight the war of independence.

During independence, only 215 daily newspapers were published in the country with 44 in English language and rest in the vernacular and regional languages, but post-independence after the Constitution of India provided with Freedom of Speech and Expression as a fundamental right not only to citizens but also to the media and since then Indian media has grown tremendously with  25000 newspapers/magazines and periodicals getting published daily in more than 20 languages with a combined circulation of more than 75 million copies across the country. But then the period of emergency (1975-1977) declared by the then Prime Minister, Indra Gandhi, came as a setback and was a brief period when Indian media faced potential governmental restrictions.

Print media has been around the globe for hundreds of years. Over the next 600 years or so, print media has developed as the primary source of law. And over the last 10 years, the youth of India who is also the backbone of the country has devastatingly boosted the use of digital media platforms. People tend to be more compatible with swiping news on their smartphones rather than going through the traditional printed newspapers, the advantage of making media as a visual impact has made electronic media enjoyable as well. Several news channels have made themselves available on digital platforms like YouTube owning a huge percentage of viewers.  Prime Minister Narendra Modi’s Digital India initiative has made a remarkable shift in the young generation to be internet friendly. The flagship program of the government of India has the vision to transform India into a digitally empowered society and technologically powerful economy.

Real-time information reaches masses within seconds and this proves to be the uniqueness of digital media. Also, most of the urban city people face severe time restraint and for such people reading the newspaper has been a far-flung task and in this, digital media has been a dream for them, as highlights of anything and everything happening across the globe can be accessed anytime and from anywhere merely by the notifications. They can get updated with any event occurring across the world during any point of time and anywhere just with a notification of the highlights of the news.

Media and The Constitution of India

The unceasing urge to change the drastic laws made by the Britishers to control the Indian press made the founding fathers of our Constitution believe that given a special mention or not press would undoubtedly create its own position, and hence the Supreme Court in the very initial times post-independence expanded the meaning of the fundamental right, precisely, freedom of speech and expression. Article 19 (1)(a) of the Constitution of India provides the freedom to the media to express and portray all information fair, unbiased, and authentic. Freedom of speech and expression lie at the very root of liberty this was obtained on the ground of freedom being a prerequisite to democracy, and denial to the same would mean strangling democracy. This fundamental right is the extension of citizen’s right and it is not absolute, basically, the laws imposing restriction on the rights of the citizens applies to and hence, comes with major restrictions, such as Integrity of India, Security of State, Friendly relations with neighboring countries, Public Order, Decency or Morality, Contempt of Court, Defamation, Incitement to an Offence.

Media and the war of digitization

For the past few years even though the role of media has evolved but there has been some factors that has affected and shaped the Indian media into what we see today. This is nothing other than like it was a war long back. But this war unlike the war of independence is against digitization.

With the tremendous growth of the internet in digital media, the newspapers face a difficult time with digital media users. However, it may come as a surprise that in India the demand of newspapers has not reduced even in 2020 the demand for newspapers has kept on rising, maybe that is because of the reason that people still consider it as a reliable source of information. According to the Audit Bureau of Circulation report (May 2017), India has seen a rise in newspaper readiness which otherwise is declining as a global trend.

Media plays the role of a channel to generate a mass opinion. We all are aware of the importance of mass opinion as the need of the hour is to generate a positive mass opinion. Hence, the media is known as the watchdog of the country. India’s Right to Information Act (RTIA) adopted in October 2005, is recognized as one the strongest legislation of the country, and the Indian media is the world’s largest media platform, it the Indian media’s right and duty to circulate information of all the events occurred across the world as a watchdog of the people. The Supreme Court of India has held that over the last few decades, press and electronic media have emerged as major factors in the nation’s life. They are still expanding and in the process burning with curiosity. Our system of government requires, as the system of government of the United States of America and the United Kingdom, constant vigilance over the use of governmental powers by the press and media among others. It is necessary for a good government. Therefore, the press and media have to constantly play the role of watchdog to maintain fair use of governmental powers and provide information for the public for every event that takes place anywhere in this world.

Freedom of press means freedom unless specifically prohibited by law, to gather, print and publish information, and set up technology in pursuit of such objective, to claim and gain access to the information. Indian media has played a very powerful role in educating, convincing, and mobilizing people in terms of spreading nationalist and patriotic ideas. Contrary to what we find today, journalism in the pre-independence period was more of a mission than a profession and journalists not only used this opportunity to spread awareness but also imbibed the urge for freedom struggle against British rule and a strong determination to extricate India from British rule and welded India into a single nation giving the sense of oneness and new national identity. Whereas in 2020, the Indian media has taken a strong diversion from what it was to what it is. Now, Indian journalism is more of a business than a mission to spread information, it focuses more on TRP and competition with other news channels. The Indian media has forgotten the sense of uniformity in diversity and has started competing with one another, which sometimes ends up spreading fake news, rage against communities, favoritism, religious war, and deviation from authenticity.  Indian media that stands on 142nd position out of 180 countries as per the World Press Freedom index, carries with itself questions against genuine delivery of information, correct information, fair news, and a lot more. Now, is the time when awareness needs to be spread about the freedom of the press because it is going to determine what information we are going to receive, eventually.

Strategic education about Indian Defence to the civilians: Need of the Hour.