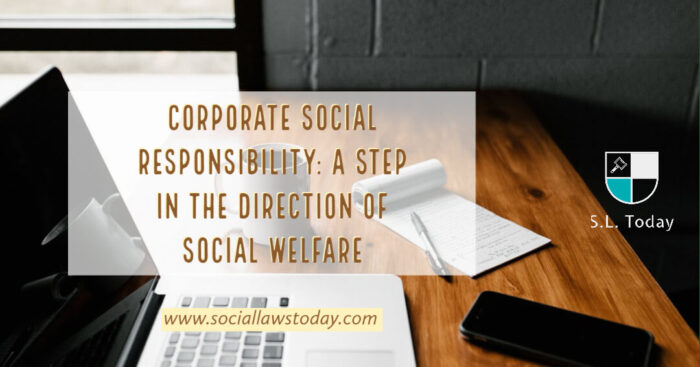 Corporate Social Responsibility concept emerged in the 1800s at the time of the Industrial Revolution, our Upanishads, Ramayana and Mahabharat etc. have written concept of CSR way before the 1800s. It is a matter of pride for every Indian that we derived CSR from our Vedic ages.

Corporate philanthropic initiatives typically involve giving money and/or resources to charities and causes at local, national and international levels. Often, a company will engage in philanthropy that’s closely aligned or related to what they do. Examples of corporate philanthropy may include a grocer donating items to local food banks or a tech firm giving money to organizations that promote equal internet access across impoverished communities.

Businesses commonly create opportunities for employees to volunteer their time to charitable causes and organizations. Connecting workers with the chance to help on local issues and engage in boots-on-the-ground volunteering not only provides a productive resource of support charities in need; it also helps strengthen the bond and promote synergy between organizations, their employees and the local communities in which they operate. An internal CSR program that sets aside a paid day off each month for employees to volunteer is one example of how a company can support such an effort.

Instituting proactive, corporate social responsibility policies that address and adhere to fair labour and diversity practices is integral to strong workplace morale—and for establishing a positive, inclusive corporate culture both employees and leadership are proud to be a part of.Enacting and sticking to fair labour initiatives while actively condemning unfair labour and trade practices demonstrates leadership’s willingness to do what’s best for employees. When implemented effectively, socially responsible labor policies strengthen brand credibility among job candidates, your staff and your target audience.

Environmental issues like pollution and climate change are hot-button topics that receive local, national and international news coverage daily. CSR strategies that demonstrate your awareness of such issues and an organizational commitment to eco-friendly policies and behavior are not only recommended but essential to show consumers and staff you take environmental stewardship seriously”[1].

It is an established principle that “what you sow is what you reap”. That means if you help the society in their growth the same society help you grow. Even Small companies will get benefitted by adopting Corporate Social Responsibility in their core of the business. The benefits of adopting Corporate Social Responsibility can be seen in their results than saying. In a survey from the net impact, it is seen that 53% of workers said that “a job where I can Impact” will give them happiness and 35% workers are ready to work for pay cut job which is committed to CSR. First of all, we have to understand that CSR isn’t about doing charity, companies don’t work in isolation they have interaction with employees, customers, suppliers and stakeholders. CSR is to manage all these relationships to produce a positive impact on society, whilst making money.

Walt Disney not only makes cartoons for the public they additionally own the ESPN and ABC networks, holiday resorts, publishing business and few other. This is the result of their CSR as well as influence on the huge amount of public. Walt Disney believes that entertaining audience isn’t enough, they have to look after the world and circumstances they live in too. Company’s credibility and authenticity solely rely on how much responsibility they act towards the public. When financial standards are set with environmental standards seem bit sarcastic, but Disney managed to work with this initiative there are live examples such as running Disneyland trains with the help of bio-diesel which extracted from the cooking oil uses in resort’s hotels.‘Green standard’ created by Disney to motivate their employees in reducing environmental impact while working, meetings, travelling and eating lunch. “With more than 60,000 staff, the results are enormous when everyone is pulling in the same direction. A clear example of financially benefiting from reducing environmental impact is made with this simply statistic: a 10% reduction in the corporation’s electricity use is enough to power the annual consumption of 3 of their theme parks. Whilst their CSR efforts may have taken a great deal of organisation, dedication and investment, 2012 was a record year for Disney‘s profits”[2].

Social Welfare by the means of Corporate Social Responsibility:-

Corporate Social Responsibility roots lie in the principle of philanthropy and charity, but its prospectus is large. It circumscribes various activities i.e. from feeding the hungry to granting opportunities for the marginalized section, from taking care of the sick and impoverished to giving aid for travelling. Before we start to contend that corporates shall dispense social welfare to the society we live in, this theory was opposed by many theorists. Milton Friedman suggested that companies are registered only for financial purposes. He suggested another reason CSR should not promote social welfare was that they have no social skill since they are in ‘pursuit of profit’.“F.A. Hayek in his Studies in Philosophy,  Politics And Economics  (1969)   argues that corporate social responsibility would displace the aim and endeavor of the firm. Yet if we observe the classical objections to CSR, they were merely driven because at that time corporation’s were not as big as today, CSR was a new concept and state intervention was prevalent. Social Welfare is vast and extensive as human needs are unlimited. Yet in the academic context of CSR, there are four generally agreed norms that is considered to be quintessential”[3].

By concluding all the above data, I want to say that Corporate Social Responsibility is the only way society get more funds for the purpose of Social welfare. The principle ‘what you sow that you reap’ live example was Mr Ratan Tata he donates almost 60% of his profits to the charity and this gives him more popularity and profits in return from the society in the form of shares, debentures and sales. Another example, Rolex Industries donated 90% of it’s profits to the charity still they have more financial stability compared to other Corporations. Corporate Social Responsibility is the future step in the direction of social welfare.

[1]Howard Schultz,Examples of Corporate Social Responsibility (CSR) and Why It Matters, Reputation Science