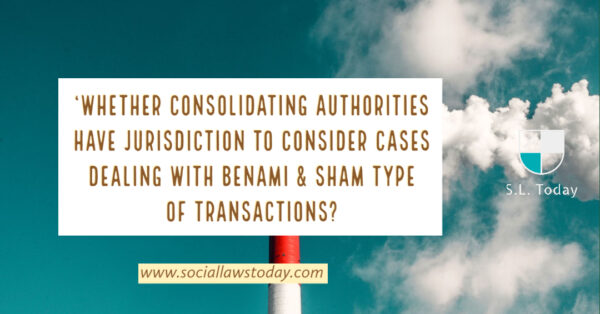 The facts of the case are as described- A who is the petitioner in the case purchased properties from B who is the Defendant 1. The property which A purchased was in mutual partition between B, C, D i.e., defendant 1, 2, 3. When A according to the sale deed went to acquire the possession of the property, C and D prevented him from doing so. A went to B and asked for his share in the property, but B pleaded his inability to do so. A filed a suit for declaration of his half share in the suit property.

Now when the case was filed, the defendant B pleaded that the sale which was done in favour of A is a benami transaction. The property is an undivided joint family property between defendant B, C, and D. Defendant C and D prevented defendant B to take possession over the property, when defendant B approached A (petitioner) for the advice, he and his brother executed a nominal sham sale deed in favour of A without passing any consideration. A took the advantage of same and filed the suit.

The learned Additional Subordinate Judge took into consideration the pleadings presented by the defendants and held that, “Even though the suit property is a joint family property and the suit is for partition, the nature of the pleadings shows that the main question here which is to be decided is that- Was any title conveyed to the petitioner on the sale deed executed by defendant 1 or whether the transaction was merely a Benami Transaction?”.

It was also observed by him that the main question is about the sale deed being benami one or not, but the abatement of a sale deed depends upon, whether the consolidation authorities have the jurisdiction to cancel the document or not. This was also one of main question before them.

In furtherance of this case, J. Hansaria gave his view on the issue of whether consolidating authorities have jurisdiction to deal with such cases or not. And this depends upon the legality of such transactions.

As far as the procedural history of the case is concerned, now we know the what Benami and Sham transactions are. Benami means ‘without name’. These are those transactions where I am selling a property whether movable or immovable, tangible or intangible to a person (A) but, (B) is the actual person who has made payment for the property. A is the person who has agreed to hold the property for B. This has made B the beneficial owner of the property.

Prohibition of Benami Property Transactions Act, 1988 was promulgated to prohibit ‘Benami’ transactions in India. This Act was recently amended by the central government as the Benami Transactions (Prohibition) Amendment Act, 2016. Before amendment it contained only 9 section whereas now, it contains 72 sections.

OVERVIEW OF THE CASE

Referring to the Bhim Singh v. Kan Singh case, in India there are two kinds of transactions- Benami transactions and Sham transactions.

The two types of transactions can be explained with the help of an illustration:

Suppose, A is a person who buys a property (makes payment for the property) but, in the name of another person i.e., B. And there is no intention of benefitting B. Here B holds the property for the benefit of A and is the real owner of the property. This type of transaction is called ‘Benami transaction’.

The important point of discussion highlighted here is that whether there is consideration for the transfer of property or not.

It was laid down in Ramchandra’s case that whether the consolidation authorities or the Civil court would have jurisdiction and it was considered that the actual cancellation of the deed is an essential part so as to know its effectivity. In benami transactions, the cancellation of deed is not required and as per Ramchandra’s case the consolidation authorities shall have jurisdiction to deal with benami type of transactions. From this we are clear with the position of Benami transactions.

Now, the point which should be taken into consideration is the legal effect of a sham transaction. It was pointed out in Meenakshi Mills case that in sham transactions there is no operative transfer, and notwithstanding with the execution of the transfer deed, the transferor continues to retain the title. This view was also supported in the Bhim Singh case.

Are Sham transactions void or voidable contract? Void agreements are the one which are not enforceable in the eyes of law. They are considered as non-existent from its very inception. Whereas, on the other hand voidable agreements are the one which are enforceable by law at the option of one party. They can be either affirmed or rejected at the option of the other party.

But can they be considered voidable agreement? To answer this question, we will refer to Section 25 of the Indian Contract Act, 1872 which says that an agreement made without consideration may not always be void. This particular section mentions some exceptions under which agreement without consideration can be held voidable. An agreement should be a written agreement and the execution of deed should take place with or without consideration. Similarly, Sham transactions are written agreement and the execution of deed takes place i.e. property is transferred from one person to another without the transfer of the title. Hence, it can be held voidable at the option of the party who makes out a case that the ingredients of exceptions mentioned in the above are section are not satisfied with this agreement.

When an agreement is void, it does need to be set aside or does not need any cancellation. But when it is a voidable agreement, the party may approach the competent authority for getting it adjudged or for setting it aside. This is permitted by Section 31 of the Specific Relief Act, 1963 which discusses about the order of cancellation i.e., when the cancellation of deed can be ordered.

Moreover, Section 53(2) of the Transfer of Property Act, 1882 talks about fraudulent transfer. It says that the sale deed can be help voidable at the option of the party i.e., transferee if the transfer in question was made with an intention to defraud him.

From the above facts and judgment, it is clear to us that an agreement or transaction which is void does not require cancellation or need not to be set aside in order to take away its legal effect. In case of void agreement, the only necessary requirement is to prove the voidness of the agreement. And in such cases the consolidating authorities have the jurisdiction to take such cases and adjudicate the grievance.

In cases where the agreement is voidable, it is necessary for it to be cancelled or set aside to take away its legal effect. In these cases, the consolidating authorities have no jurisdiction to do so. Such matters are the concern of Civil Court.