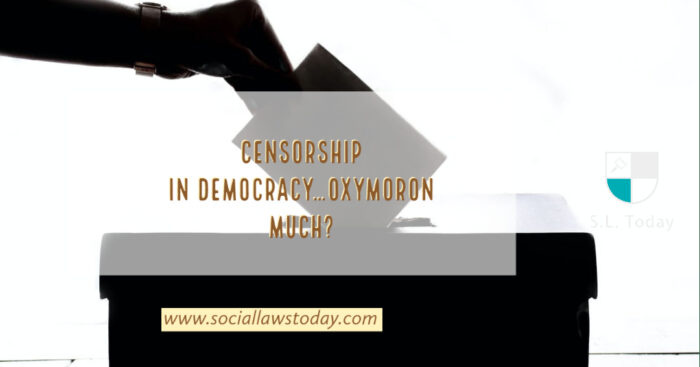 ‘I disapprove of what you say, but I will defend to the death your right to say it.’

While I believe that the government should certainly not censor speech, press, media or the Internet, a very practical view of it is that there is no society without some censorship.

To mention freedom and censorship in the same breath might appear a contradiction of terms; for censorship is by its very nature ruthless and arbitrary. It invades privacy and suppresses free enterprise, sacrificing individual interest for national interest without compunction. Yet there is, in reality, no contradiction, and there need be no conflict.

FREEDOM OF SPEECH AND EXPRESSION

India is the world’s largest democracy and protects free speech in its laws and constitution.1 Yet, freedom of expression in the online sphere is increasingly being restricted in India for a number of reasons– including defamation, the maintenance of national security and communal harmony, which are chilling the free flow of information and ideas. The right to free speech is one of the most celebrated as well as vigorously guarded civil liberties from any sort of governmental intrusion. Article 19(1) (a) of the Constitution of India promises right to free speech and expression to all the citizens. However, ‘reasonable restriction’ can be imposed on the enjoyment of this freedom by the State under clause 2 of Article 19 on certain grounds, i.e., the interests of the sovereignty and integrity of India, the security of the State, friendly relations with foreign States, public order, decency or morality, or in relation to contempt of court, defamation or incitement to an offense.

In modern democracy where freedom of speech and expression is a gem among fundamental rights, the sedition law is often misused by over-enthusiastic and politically influenced investigating agencies. As per the data of Natural Crime Records Bureau (NCB), there has been a spike in sedition cases since the beginning of 2014 – which only signifies that there has been a spike in dissent.

The question, then, so what should government do, how far should these restraints be permitted to go, and in what manner should they be accomplished?

There is a very fine line between interference and intervention, the government might intervene in matters censorship is essential but it must not intervene in day to day matters otherwise that would be a threat to the freedom of speech and expression and the autonomy of media. Censoring media or press, defeats the very purpose of it. The government might set the direction for acceptable public behavior but the onus should be on the people.

An example of irresponsible behavior on part of media was at the time of 2008 Mumbai Attacks. The media went so over board while reporting that it actually helped the terrorists in knowing India’s operational details. These are the instances when government restrictions become necessary. But these needs to be change, while I do not support censorship, media should be careful about what they speak. Indian media has a notorious reputation for sensationalizing news or making claims that are far from being accurate.

People must realize that freedom of speech and expression comes with a ‘reasonable restrictions ‘clause. The line between ‘free speech ‘and ‘hate speech’ must be drawn. Thomas Jefferson was an avid supporter of a free press, however, he also pointed that “… the press is impotent when it abandons itself to falsehood…”

While I write about the internet, the fun fact is, in 2018, India (a country which envisions itself as a digital economy) was the only democracy with 100+ internet shutdowns and during the 2019 CAA protests, this number has increased manifold.

Whatever intent might be stated for such restrictions, the government should not curb dissent. Instead, it should welcome the criticism with open arms, as the criticism would help them to improve their public policy. The people and the media, on the other hand, should use the ‘freedom of expression’ responsibly.

The role of the Supreme Court in preserving the cornerstone of a free and liberal society – a free press, has been rather abysmal. The Court in Alakh Alok Srivastava v. Union of India has made its expectations of the media during the COVID19 pandemic, rather unambiguous – ‘refer to and public the official version about the developments’. Though the judgment just falls a notch short of subverting the media and its freedom, it is no less than an Orwellian state of affairs. The concerns regarding fake news and media freedom are not mutually exclusive; they have to be dealt with in tandem.

The potential problem in all this is that making corporate entities de facto gatekeepers to information can seriously hamper the effectiveness of a free and independent media, which is essential for a democratic society.

In this press freedom and censorship index, Chinese Government is the master of the Internet Censorship. Not only are many social media websites and blogs blocked, but search engines are filtered and will not offer results on keywords the government has prohibited.

We should be allowed to do or say whatever we want without the government interfering.”

The Government must deeply reflect on the Supreme Court’s views in Arnab Ranjan Goswami v. Union of India – “journalistic freedom lies at the core of speech and expression protected by Article 19(1) (a)”

We are at a time when all of us need to be more tolerant and more understanding of voices and ideas that stand in opposition to ours. We need to stand together when we’re called to defend the right to speech, a right that is shared by all of us despite our differences.

Censorship is neither a guardian of private morals nor a snooper into the violations of peacetime laws. Free speech is not perfect. People lie and are sometimes believed. But the alternative – government as censor – will be worse. Individuals and private enterprise are the proper censors of bad speech. They remain our best responses to the coming challenges of the digital era.

It is shown that despite its lively democracy, strong tradition of press freedom and political debates, India is in many ways struggling to find the right balance between freedom of expression online and censorship.