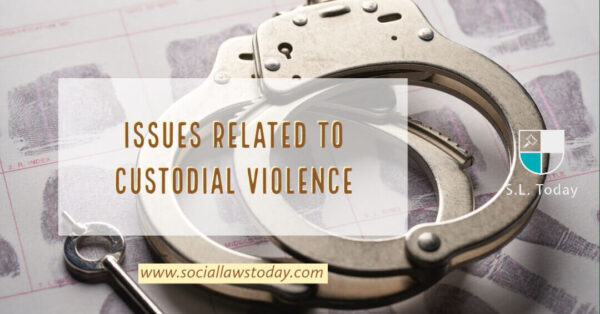 “Torture is wound in the soul so painful that sometimes you can almost touch it, but it is also so intangible that there is no way to heal it.  Torture is anguish squeezing in your chest, cold as ice and heavy as a stone, paralysing as sleep and dark as the abyss.  Torture is despair and fear and rage and hate.  It is a desire to kill and destroy including Yourself” Adriana P. Bartow

Custodial death is universally held as one of the cruelest forms of human rights abuse. Custodial violence is not a new one. According to the National Campaign against Torture from 2006 to 2016 report states that 1022 died in police custody. But, in a recent report says 1731 people died in police custody in India in 2019. Apart from the Police custodial death, more than 2000 human rights violations cases were recorded against the police between 2000 and 2018.  The Former Supreme Court Judge V.R. Krishna Iyer has said that custodial torture is worse than terrorism because authority of state is behind them. Such actions by a few cops has brought disrepute to entire police department.On the 19th June, 2020 – Police picked up the father and son who were running a mobile phone shop and sales centre in Sathankulam (Tuticron District) for allegedly keeping the shop open in the evening in violation of lockdown restrictions. Both they were booked under several sections of IPC. They were remanded to judicial custody.  The third day after a medical check up, they were sent into the Kovil Patti sub-jail and a few days they died due to health issues said police.  But the Eyewitness said that they had suffered sexual torture (inflicted using lathis) at the police station, alleging that police brutality led to the death of father and son.

Several methods were used by police officials to obtain information. One of the most common practice is repeatedly hit on the back of person with sticks and lathis. There are categorized into different types such as physiological violence, physical violence and sexual violence.  This includes punching, pulling hair, severe beating, kicking with boots, slapping, positional torture, causing disfiguration and exhaustion , prolonged handcuffing, restraint and shaking, threats and humiliations, positional torture, crushing injuries, applying roller on the legs, suspension for long hours, stabbing with knife, electric shocks, infliction of Injuries to private parts, stabbing  with screw driver, falagana or beating with sticks on the soles,  prolonged exposure to hot or cold temperatures, pouring petrol on private parts, pharmacological techniques, use of irritants substances like chili powder and table salts applied on private part, denial of medical treatment, undressing, rape and causing torture to such an extent that the victim feels fear of immediate death.

Legal Provisions under Constitution of India :

Protection from torture is a fundamental right enshrined under the Article 21 (Right to life) of the Indian Constitution.  It also includes Right to fair trail , Right to free legal aid and Right of prisoner to have necessities of live.

Article 20 Prohibits Retrospective Operation of Penal legislation, Article 20(2) states that the doctrine of double jeopardy(A person cannot be prosecuted more than twice for the same offence) and Article 20(3) provides that no person shall be compelled to be witness against himself.

Article 22 provides four fundamental rights with respect to conviction.  These include being informed of the grounds of arrest, to be defended by a legal practitioner of his choice, preventive detention laws and production before the nearest Magistrate within 24 hours of arrest of the person.

Legal Provision under Indian Evidence Act: Section 25 of the Indian evidence act – No confession made to be police-officer shall be proved as against a person accused by anyone.

Sections 7 and 29 of the Indian Police Act provide for dismissal, penalty or suspension of police officers who are not negligent in the discharge of their duties or unfit to perform the same. This can be seen in the light of the police officers violating various constitutional and statutory safeguards along with guidelines prescribed.

D.K.BASU vs STATE OF WEST BENGAL: Use of third degree methods or any form of torture to extract information is not permitted. Particulars of all personnel handling interrogation of an arrested person must be recorded in register. A memo of arrest must be prepared to have date and time which must be signed by a family member of accused or a respectable member of the locality and countersigned by authority.  The accused has the right to consult his lawyer during interrogation.  The arrested person should be subjected to medical examination every 48 hours by a trained doctor who has been approved by the Health Department. An entry must be made in record at the place of detention in regard to the arrest. Copies of all documents relating to the arrest including the memo of arrest should be sent to the area magistrate. Supervise inspections by Non-Official Visitors (NOVs) should also be made mandatory which would act as a preventive measures against custodial torture.

JOGINDER KUMAR vs STATE OF U.P AND OTHER: Arrest is not made in routine manner.  The officer making the arrest must be able to justify its necessity on the basis of some preliminary investigation.

NILABATI BEHERA vs STATE OF ORISSA: The states have an obligation to give compensation to a victim or to the heirs of victims, whose fundamental rights have been violated by its agents.

PRAKASH SINGH & OTHRTS vs UNION OF INDIA: The court ordered setting up of a police complaint authority in each state to look into compliants against officers of and above the rank of superintendent of police in cases of serious misconduct, including custodial death, grievous hurt and rape in police custody.

CONCLUSION AND SUGGESTIONS TO CURB THE TORTURE:

Implementation of D.K. Basu judgement could curb the custodial torture.  The Supreme of India laid down many guidelines to prevent torture and but above mentioned judgements are rarely followed. Must follow the Supreme Court and Human rights commission guidelines related to torture and police reforms.  CCTV cameras should be installed in police stations including interrogation rooms. In 1985 Law Commission report suggests to enactment of section 114-B into Evidence Act, raising a rebuttable presumption of culpability against the police. If anyone in police custody, dies or is found with torture have still not become law.

The Above mentioned rule became law it could curb the custodial violence. Police Compliant authority must be set up in every district. India signed a number of International treaties which prohibit the torture.  The United nation against Torture and other Cruel, inhuman or Degrading treatment or punishment, India signed the convention on 1997. But it is not ratified till now.  India could  ratify this treaty, may be custodial torture have been reduced. According to the 273rd Law Commission Report states that those accused of committing custodial torture by policemen, military and paramilitary personnel should be criminally prosecuted instead of facing mere administrative action establishing an effective deterrent. Already the prevention of torture which was introduced in 2010, This bill became an Act maybe custodial violence has been reduced.