Strategic education about Indian Defence to the civilians: Need of the Hour 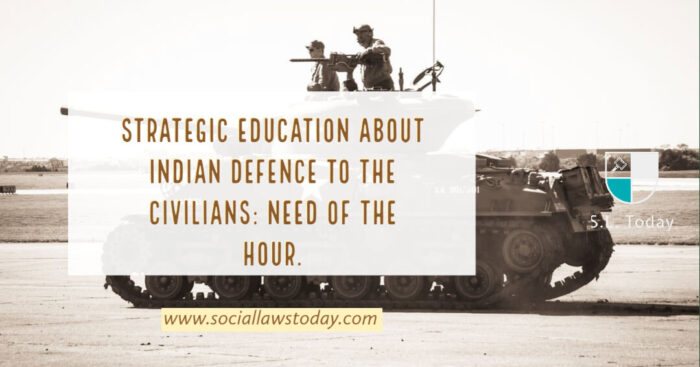 Many of us have some problems with the current education system too, any educational institution must not just transmit knowledge it must impart “VALUES” and by providing and giving defence education it will increase the values, discipline, and the feeling of patriotism amongst the citizens. If you are already ready, then you have reached halfway.

“Maps are not just driving apps today, they are driving economies too”

It is the moment of pride when your country’s defence sector is amongst the best defence sectors of the world. Indian army is the 3rd largest army in the world, with the strength of over 1.4 million active army personnel, 11.55% reserve army, and 20 lacs paramilitary forces. The Indian defense sector becomes a very wide topic to understand and learn about. India owns 7,516 km of the coastal distance with 15,106.7 km land distance, on average around 22,000 km each day our defence has to safeguard from the external threat.

India is known for its “Unity in Diversity” but sometimes it becomes our vulnerability. It is very important to be conscious about defence of our nation for the ease and benefit to countries’ national security management. From decision making to procurement neither of them can be neglected, they share equal importance. As we all know, few things about the defence sector through many ways, some of us have our family members serving for the defence or through news channels, but the thing that should concern us the most about is whether every Indian especially the civilians, do they have the mental capacity to take things about the defence sector in the sorted manner, do we have enough logical thinking when it comes to the defence sector?

While across India we all are familiar by the term ‘defence’ we should be worried to a large extent that we are not succeeding in placing the values in a person, the respect, the thinking they should have for their country and the National personnel.

Do we have enough strategic thought?

Every country aspires to live in peace with the desired development. India wants to be the global power but right now before being global power being smart power is the need of the hour. The most important sector in India needs to introduce as the main subject in all the stages of the study.

For countries like India where there is great manpower, unemployment, a huge population, poverty, it is very important to work strategically. Indians work very strategically to survive; now it is time to use those strategically talented people for the country’s development just by showing the right direction and polishing their skills.

India does not have a written strategy about national security, but at least it can be taught. There is nothing new to listen the news of countries attacking Indian citizens, trying to harm Indians, not everyone is supposed to go on the border and fight. Sometimes a country, especially the ones who do not have really good relations with the countries they are sharing a border with, needs the consciousness of citizens. Defence consciousness of the country will contribute a lot in the all-round development which is important.

Right now India is lacking far behind in having enough strategic thoughts. This question needs the attention of government officials. Even though having the largest defence budget there are still many deals that are done only on paper, but not in reality. There are many weapons/equipments that army needs and India is unable to provide them. Make in India failed drastically when it comes to the defence sector.

In India, there are 821 universities and not even 20 universities in total have defence and strategic studies as their main subject. Some of the reasons why it should have it, are:

International boundaries- Recent Case: The southern part of India is gifted with the great Indian Ocean, the Indian Ocean is the 3rd largest ocean in the world covering 19.8% of the water on the earth’s surface, it needs to get protected and again it can be used in a very good way to generate employment for the people.

Recently the judgement on an international controversy between India and Italy came, the case goes on by the name of Enrica Lexie Case[1]. The claimant was The Italian Republic and the respondent was The Republic of India. According to Italy, the dispute arises from an incident that occurred on 15th February 2012, approx. 20.5 nautical miles off the coast of India where “MV Enrica Lexie” oil tanker crossed the Indian western coast having the Italian flag over it. Two Italian marines of the Italian navy killed two Indian civilians, fishermen, at the coast of Kerala because the two soldiers of the Italian Navy misunderstood the fishermen as the attackers. The dispute was solved by The United Nations Court recently in July 2020.

To avoid such cases in the future like Enrica Lexie it is important for the citizens to know their boundaries.

Helps to maintain internal security and peace of the Nation: Educating how defence work will naturally help to maintain the internal security of the nation. The doubts of many minority communities regarding their safeguard in the secular country will get clear, and the internal problems society faces in the name of different caste, religion, will surely vanish away slowly and steadily. Killing the citizens/civilians of the country by the terrorist group is not so new in India, according to the data by the South Asia Terrorism portal[2] there are almost 76 Active terrorist groups. In 2020, 161 incidents took place where 48 civilians lost their lives, and 67 Security forces[3]were harmed. India is a dynamic young country but what happens when some unemployed frustrated youngsters take guns and bullets in their hands? It is more dangerous to assume. So education in our country is not only a social or an economic issue, it’s even a national security issue.

Indian defence sector is one of the major defence acquirer in the world, and to our minds it needs strategic partnership with its citizens. The need to introduce basic defence education shall be identified, pen downed, tackled, or otherwise, the dream of India to be the global power soon will end up just being a dream. Many of us have some problems with the current education system too, any educational institution must not just transmit knowledge it must impart “VALUES” and by providing and giving defence education it will increase the values, discipline, and the feeling of patriotism amongst the citizens. If you are already ready, then you have reached halfway, but as it is said that “YOU CAN’T CHOOSE YOUR NEIGHBOURS, YOU HAVE TO LIVE WITH THEM’. So, for that learn strategies for the defence.

A MESSAGE FROM THE BORDER - Social Laws Today

[…] time. But a man from the team was shot on his leg during firing, he was shrieking and screaming “sahab ji bacha lo, goli lagi hai” (save me sir, I’m hit). Dad carried him on his back and kept retaliating with his team until the […]