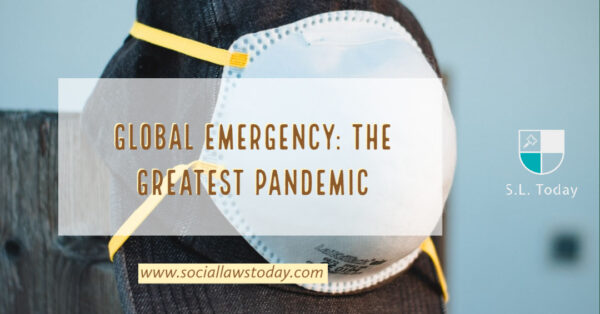 The news of World War III, the Bush fire, the asteroid, and now this COVID-19, the year surely seems not what we expected from it. The year has proved that nature is still the ‘ULTIMATE’. Not only now but nature has shown several times in history that she is ultimate. We, humans have done enormous destruction to our mother nature that she needs a break for the revival. And this time the conditions are severe as the war is against an invisible enemy, taking the lives of our people at a great pace. The biggest weapons this enemy has is the late and common symptoms like throat ache, fever, and some problems in breathing. In countries like India the situation could be dark because the problems of fever, cough, cold are common in the population as it is very strenuous for a common man to make a difference and the matter of concern is that up till the date the person will get to know that he is suffering from the virus, the condition will no longer be in hands. This enemy virus appears to be more grinding for the government of India because the most developed and the superpowers of the world are failing in controlling it to spread at that point we are much back to them in matters of health facilities and self-dependence. The point that brings up the worries in the minds is that we rank 154th as per the World Health Index 2019 and the ones sitting on the top have tasted the worst of this virus, and then the question arises that, what extra can we do for a successful fight with this? The point that the experts feel is best in the case of India is that he got some more time to take action and to plan its strategies, after getting the experience of the effects from the first hit countries.

To combat the expected drastic colours of the virus the Indian government took the shield of ‘LOCKDOWN’ in the hands as it has been prescribed by the World Health Organisation to be the best to maintain social distancing and cut the spread chain of the virus. And along with the lockdown the government also proposed several possible reforming steps to help the common man and the warriors in this fight.

To combat the expected drastic colours of the virus the Indian government took the shield of ‘LOCKDOWN’ in the hands as it has been prescribed by the World Health Organisation t be the best to maintain social distancing and cut the spread chain of the virus. And along with the lockdown, the government also proposed several possible reforming steps to help the common man and the warriors in this fight.

All this started with the Address to the Nation on March 20 by the Prime Minister of India Shri Narendra Modi, and in that 30-minute long address, he asked the public to follow the ‘JANTA CURFEW’ on March 22, Sunday. On that day only he ordered the first phase of a complete countrywide lockdown of 21 days that is from March 22 to April 14. In his address, he exclaimed that if we didn’t follow this 21-day lockdown strictly then India will set back 21 years and many families would be destroyed.

And from that day the series of the lockdown began leading to the;

And in this long span, the government made several announcements to help the poor, farmers, the disabled, women, middle class, industrial sector, etc. In which the Finance Minister Nirmala Sitharaman announced:

Repercussions of lockdown on migrants:

In India, thousands of men and women move out of their home towns and villages in search of work so to feed them as well as their families. And it has become a trend because of the continuous failure of the state governments in proving job opportunities in their homeland. And this is the failure only that has made the migrants suffer much.

As the corona pandemic was immediate for all, the steps taken by the government also were immediate, there was no time in between so that the migrants could return to their homeland or make sufficient facilities for them as well as their families. Then the government on their behalf tried to make the things and situations better and comfortable as the kitchens were started by the govt. so to provide meals, brought the scheme to validating the ration cards countrywide and even new ration cards were also announced for the migrants, allowing themselves to take the benefit of the announced scheme.

But a rotten apple spoils the whole barrel, and here the role of the rotten apple was performed by the fake news that got spread in Mumbai over the starting of railways that left the administration at unrest, when thousands of migrants gathered near the Bandra station, this led to the uprise of demand of the migrants as well as the oppositions to help them reaching their homeland. In the beginning the government didn’t made any announcement but asked the state governments to tackle the situation accordingly.

And within which several states announced to provide free food and shelter to the migrants but for them[migrants] this was not enough and they started moving to their places with the best possible means they could like some started on foot, some on cycles, auto rickshaws, etc.

Also read: THE POSITIVITY UNDER THE NEGATIVE PANDEMIC

As per the scene, it appeared to be the largest march of the mob after independence. Like such kind of huge movement of the migrants was never before and was even not expected by the government. Later then, the government announced the starting of a few trains named as “SHRAMIK EXPRESS”, from June 1 2020 only for dropping the migrants to their destinations. Further the number of the trains was exceeded as per the conditions and the demand by the states. In that also the government tried to relieve the stress of the expenses on the travel from the heads of the migrants as it was said to be bourn by the railways and the state in the ration of 85:15 respectively and for the journey water bottles and packets of chips etc were provided by the railways. But the ground reality was not as it was said to be as the migrants were being charged the ticket fare.

The corona and the lockdown have left such a dark footprint on the lives of the migrants that can not be washed away. Some lost life due to hunger, some got cut down by the train while travelling back to the hometown and some killed themselves finding themselves not surviving in the near days because of losing their job. And the severity of the impact can be understood by the numbers that so far over 130 migrants lost their lives and according to a report 80% of the urban workers lost their jobs due to this pandemic 2020. Even after this all those who survived and succeded in not losing the job faced a serious cut in their pay by the heads, and it leading to a great spark among them against the heads. But this is such a situation in which nothing is in the hands either say of the migrants or the employers, because the source of earning is also close for them. And keeping this thing in the scene even the Supreme Court has asked to go for a cut after healthy discussion and on which all gives a thumbs up.

Finally, it can concluded that this immediate disaster has impacted the lives of each and everyone none particular, but still the one with the less resources feels it more than anyone else like in this the migrants had, because atleast the riches were in their houses, with enough money and other resources with them. And instead of rivalry it is the time to work with co operation with one another and win this fight. In the end we must remember the words of Gwendolyn Brooks,

MENTAL HEALTH AND THE PANDEMIC