Abrogation of Article 370 in Kashmir 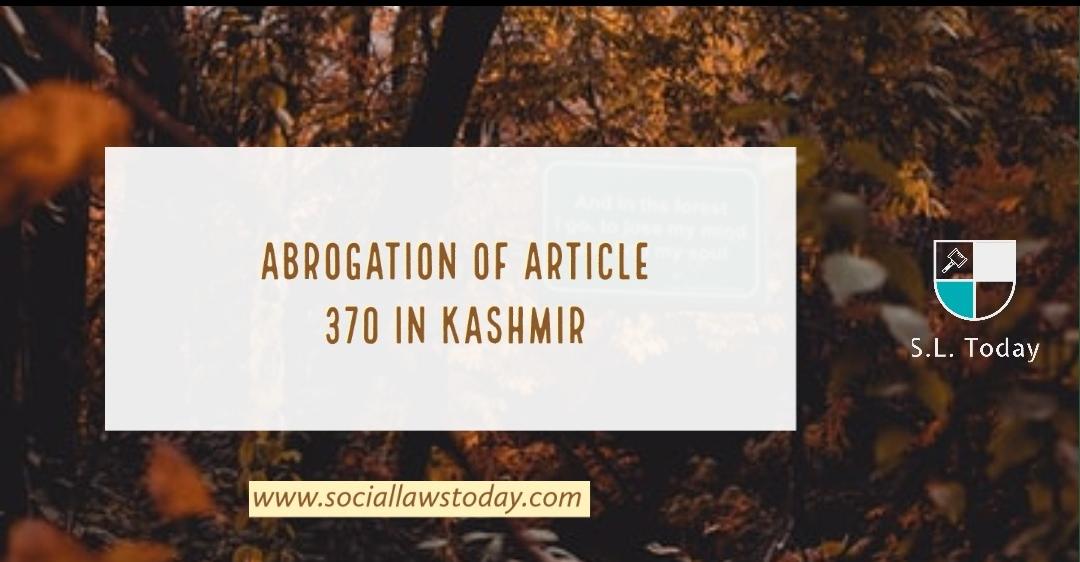 Article 370 had given the special status to the state of Jammu and Kashmir residents, earlier central government had to take the permission of the state government before imposing any law except in the matters of Finance Ministry, foreign affairs, defense, communication. Previously this state was treated differently from the constitution of whole of the India, it was given temporary status under part XXI of constitution which includes temporary, transitional and a special status to be provided also the residents of jammu & Kashmir earlier residents used to enjoy dual citizenship, ownership of property rights are given to people who are the permanent residents of the state which was clearly defined under Article-35A as well as fundamental rights enjoyed were also quite different.

On the date of 5th  August 2019, there was a major decision taken by the government of India to revoke Article 370 and article 35(A)which included bifurcation of  Jammu and Kashmir and  ladakh into two different union territories, This decision was taken by the government to improve the condition of Jammu and Kashmir and to remove the backwardness of the state as earlier it was not treated completely as a part of India also to promote equality and make it as a stepping stone in the development of the country, the step of revocation is for abolition of isolation of the state which was going on and after the decision whole of the state was backed with more and more of security and all the commutation services were revoked ,schools and colleges were shut down, public movements were banned and  major leaders were house arrested in order to maintain peace and harmony in this critical situation .

Though the revocation decision was for the development of the country but it turned out to be a situation of major terror as people were not able to contact their families also no right to speech were given to any person as well right to life and liberty was also harmed on a great level, nobody knows what happened and how the residents were treated at that particular time by the troops, Jammu and Kashmir was turned in an open jail as there was no contact, This major decision also have taken away all the unique privileges which were given to the residents and also the situation of women also get affected on great extend, the thought which came into existence was that Indian government want to strengthen its influences over its only Muslim majority region, people took it as the religion biased decision also.

Mehbooba Mufti former chief minister of Jammu and Kashmir in her voice message declared this day as a black day in the history and also clearly was against this decision as she said that parliament without giving any notice have taken everything from Kashmir and also have not given  opportunity to any person  to speak against this decision whereas Maharashtra CM Devendra Fadnavis supported this decision by quoting that the Indian government made Kashmir as an integral part of India, all the BJP leaders were in immense support of this bill.

Personally, I support the decision which was taken by the government in order to promote the slogan of “one nation, one constitution” and brotherhood among the country also the object of promoting growth but at the same time people of the state suffered it to the most and also are totally deprived of their unique status, government should definitely take the decisions for the evolution but on the back of the mind should protect as well as provide its citizens with their comfort.