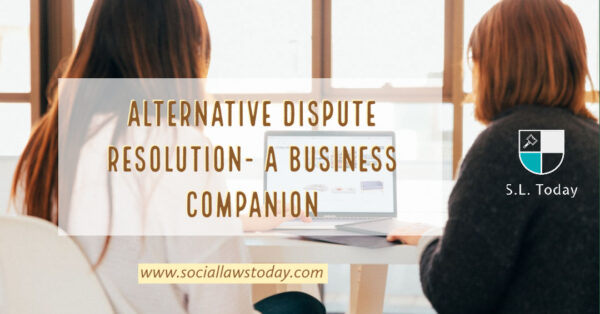 Flexibility and neutrality are the basic reasons why alternative dispute resolution (ADR) processes such as mediation and arbitration have been developed.

Litigation can be a costly and time-consuming process without the right strategic guidance and advice. The root of business is people, and without people there would be no business. The term ‘people’ involves those from chief executives to customers and people at every level between. The COVID-19 pandemic has caused untold levels of disruption to businesses across the world. With the elevated stress levels resulting from the outbreak of the pandemic, it is no wonder that disagreements can occur. The management of these issues is the most important crisis before us. Even for the most experienced business professionals, the current economic climate is challenged. Avoiding court proceedings not only protects the business relationships but also the profits and reputation of businessmen. Navigation through the changes and contractual obligations can be minimized using Alternative Dispute Resolution (ADR) procedures. Communication is the key to resolve commercial disputes. Mediation and arbitration are two methods of ADR, which promotes amicable communication between disagreeing parties. This article briefly discusses the concept of mediation and arbitration, their differences with each other and their advantages over litigation.

Mediation leaves parties in a better state of mind and in most cases, it works well and serves its purpose. It allows the participants to agree and decide the terms they will accept in a settlement agreement with the support of an impartial and independent mediator. Further, it helps to keep business disputes out of public eyes. The cost of litigation proceedings can swiftly increase with the court process and the number of hearings. Mediation, on the other hand, encourages settlements much quicker. The process also minimizes the expenses of both parties.

One of the many benefits of meditation is how quickly it can be arranged. It typically resolves cases within a day. It also generates optimal outcomes that the parties can control. Also, the costs are far lower than alternatives like courts, tribunals, etc. A good mediator helps to facilitate conversations during the meditation process. In fact, the purpose of meditation is to empower parties to find common ground, develop ideas and communicate effectively to ensure that each party feels heard and respected.

Afcons Infrastructure Ltd v. Cherian Varkey Construction Co. (P) Ltd, is a landmark case where the Supreme Court normalized the mediation of disputes relating to contracts, trade, commerce, consumer disputes, and even tortious liability. This process is not so established in India, but, following the observation made by the Supreme Court in the said case, various decisions were made in some of the recent cases, where a more favorable approach is made towards mediation by courts.

Mediation helps businesses owners navigate their way through tricky situations, relieve their unwanted stress, and empower them to get back to doing what they love, which is running their business effectively. Try meditation to resolve your dispute and gain a deeper understanding of the person you are in conflict with.

In some cases, settlement cannot be reached through mediation. In such situations the parties have several options, depending upon the agreement. There is a wide range of dispute resolution techniques that can be used in various disputes. Alternative procedures such as arbitration also offer flexibility which is legally binding. Arbitrator helps people feel at ease and builds instant credibility whilst delivering consistent, high standard results. Commercial arbitration, consumer arbitration, labor arbitration, grievance arbitration, and contract arbitration are its major classifications.

In India, laws relating to domestic arbitration, international commercial arbitration, and enforcement of foreign arbitral awards are given under the Arbitration and Conciliation Act, 1996. In the case of Hindustan Construction Company Limited & anr. V. Union of India, the Supreme Court, struck down Section 87 of the Act which was inserted by the 2019 amendment. Introduction to section 87 would cause a delay in the proceedings of arbitration and the interference of the court would be more thereafter which was defeating the concept of arbitration.

Arbitration can be considered as a private dispute resolution forum where issues can be resolved with ease compared to court trials. So, most business clients prefer arbitration over litigation in courts. The process is held privately so that the public and the competitors do not get any information regarding the dispute and testimony.

Difference between arbitration and mediation

How are mediation and arbitration different from each other? This is a common question that most of you may have in your mind. Both arbitration and mediation are two forms of alternative dispute resolution. There are other forms like negotiation, settlement conferences, facilitation, neutral evaluations, and Community Dispute Resolution Programs.

In the case of arbitration, the arbitrator analyzes the legal rights and wrongs of an issue and makes a decision. Once the arbitrator has arrived at a decision it is binding on both the parties whether they agree with it or not. It is very much like the way a court case is decided by a judge except that the process does not take place in a courtroom room, and it is not open to the public. As in a court case, there is usually a winning and losing party in an arbitration.

In mediation, the mediator does not decide the dispute himself. He only helps the parties to settle their disputes by arriving at an agreed solution. This is done by a method of discussion and narrowing differences.

In a successful mediation winning or losing doesn’t matter as the decision is not binding on either party unless they agree to it. While mediation ends in an agreement signed by the parties, an arbitration ends in a decision made by the arbitrator himself with no agreement between the parties.

Mediation is a more favorable alternative compared to arbitration due to its informal and quicker nature.  In the case of arbitration, the same hostility may be exhibited by the parties as in the case of court trials. Meditation, on the other hand, offers a more relaxed and peaceful atmosphere to the parties.

Flexibility and neutrality are the basic reasons why alternative dispute resolution (ADR) processes such as mediation and arbitration have been developed. Time constraints, confidentiality, and international enforceability are other common considerations for using ADR procedures for conflict resolution. Although dispute resolution is not the first thing that pops up in one’s mind when he/she thinks of starting a business or entering into a contract. But we have to be aware of the fact that differences, hatred, and grievances can occur at any time. So, the parties must have an idea about the potential conflict areas, and also must find out methods to solve the confics. ADR methods are the practical means available to businessmen to resolve commercial disputes.

[…] An alternative to going to trial is arbitration or mediation. These two terms form the basis of the … process, which is a way for parties to resolve their differences without going to court. […]