Rights and Laws: A protective gear for women 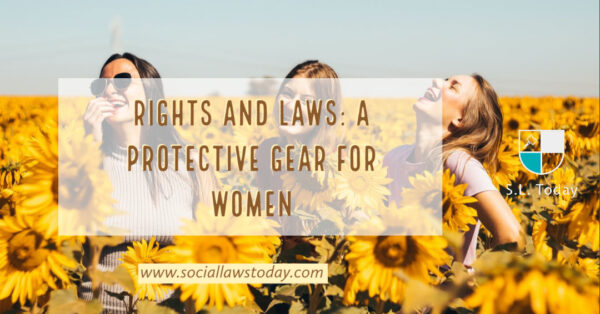 The lives of women improved through schemes, policies and awareness drives and now even the government thinks first of women empowerment while policy making.

Women are the most important part of a society without women our society is incomplete just like the bird without wings but still they are considered as the weaker section of society. Women are the major victims of violence especially domestic violence, abuse, sexual violence, dowry deaths, forced abortions etc. In India, women comprise 48.04% of the population, most of the girls are killed in the womb and if born then they are thrown in the dustbins or killed. No one becomes happy with the birth of a girl child. Though the women are the one who carries the generation forward but the men are considered as the successor or the carry forwarder of property. Periods is still a stigma in society, 23 million girls drop out of school every year when they start menstruating and the drop out is due to poor sanitation hygiene.

The must known Rights of women

The Government of India appointed a statutory body known as National Commission for Women in 1992, which is generally concerned with advising the government on all policy matters which affects women. To safeguard the rights of women laws were made, violators were punished, fines were imposed and the necessary rights were granted. The reservations for women were increased in every field and they started getting funds for education, marriage etc. There are several Acts that were made for women to give a protective gear as well as for enhancement of rights-

The prohibition of giving or taking dowry in terms of money or some other gifts etc. during or after the time of marriage but this does not include Dower or Meher in case of Muslim Personal Laws. The punishment of taking dowry is imprisonment of 2 years and fine not less than fifteen thousand rupees.

The act which provides special form of marriage for the people of India and all Indian nationals in foreign countries irrespective of the religion or faith followed by either party.

The act protects the employment of women (both in public or private sector) during the time of her maternity and entitles her for a maternity benefit that is full payment even though they are on leave from work to take care of a child.

The act provides protection against sexual harassment of women at workplace (both public and private sector) and for the prevention and redressal of complaints of sexual harassment and for matters connected therewith. The punishment for this act is one to three years’ imprisonment or fine.

The Act means the prohibition of depiction of women (it can be advertisement, labels, stamps etc.) in any manner in terms of figure of women, her form of body or any part in such a way as to have the effect of being indecent or is likely to deprave or injure the public morality. The punishment for first conviction is imprisonment of two years and fine of two thousand rupees and in the second conviction the imprisonment may extend from six months to five years and a fine not less than ten thousand rupees to one lakh rupees.

An Act to provide for the payment of equal remuneration to men and women workers for the prevention of discrimination on the ground of sex and to reduce discrimination against women in the matter of employment and for matters connected therewith. The punishment for being biased is fine of ten thousand which may extend to fifteen thousand rupees and imprisonment for three months but which may extend to one year.

The Act states that women can get abortion done if the medical service provider can assess if during or post-pregnancy there is a risk to the women’s life or if the child born could be handicapped. The act states that nobody else’s permission except that of women is required for abortions and her pregnancy. It also covers single unmarried adult women.

As per the Act, a divorced Muslim Woman is entitled to reasonable and fair provision and maintenance from her former husband and that should be paid within the period of iddah (period a woman observes after the death of husband or divorce)

This act legalised the remarriage of Hindu widows and the widow was authorised to forfeit any inheritance that she may have obtained from her deceased husband.  The act also provides legal safeguards and protection to men who marries widows.

Participation of women in various sectors

In 1993, a constitutional amendment was passed in India which said that one- third of village council leader or sarpanch positions in gram panchayat is to be reserved for women. And today 14 states have 50-58% representatives of women in Panchayati Raj, Jharkhand leads the way by 58% followed by Rajasthan and Uttarakhand. In 2008, the women’s reservation bill was passed in Rajya Sabha for 33% reservation of women in Lok Sabha and legislative assemblies but till now it is not passed in Lok Sabha. Our Parliament has 11.8% women representatives and 9% in states assemblies. According to United World Institute for Development Economics Research (UNU-WIDER)- women legislators in India raised economic performance in their Constituencies by about 1.8 % points per year more than male legislators. The political empowerment of women is necessary for readdressing the issues of gender inequality.

The army has 3.80% of women officers, the Navy has 6% women officers and the Air Force has 13.06% of women officers’ highest among all three forces. The government announced that women would be inducted as soldiers or Personnel below Officer Rank (PBOR) in the military police from 2019 onwards. Recently, the ministry of defence has issued the formal Government Sanction Letter for grant of Permanent Commission (PC) of women Officers in the Indian Army and in Indian Navy. There are three women fighter pilot in our country they are Avani Chaturvedi, Mohana Singh and Bhawna Kanth.

According to Lakshmi Puri, UN Assistant Secretary General “Sports has huge potential to empower women and girls”. The role of Indian women in sports is equivalent to men. P.T Usha was first Indian women to reach the final of an Olympic event. She was known as queen of Indian track and field. P.V Sindhu followed by Saina Nehwal in badminton. Sakshi Malik, Geeta Phogat, Babita Phogat etc. are the freestyle wrestlers and they won medals in Summer Olympics and Commonwealth games. MC Marykom is an Indian boxer to represent India in Olympics. Mithali Raj, Jhulan Goswami etc. represented India in cricket. There are many more women who represented India and we are proud of them.

The enhancement of rights of women is done more than half way but there is a need to complete the full way. The lives of women improved through schemes, policies and awareness drives and now even the government thinks first of women empowerment while policy making. Now I would like to end with Dr.BR Ambedkar quote “I measure the progress of a community by the degree of progress which women have achieved.”