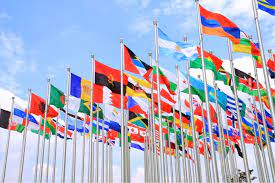 They can be divided into 2 categories; i.e.,

A. Primary Sources of International Law

As per Article 38(1) of the Statute of the ICJ, there are 5 sources of International Law, i.e.

•This is the most important source of International Law.

•States create binding rules by them.

•Convention includes Treaty, Protocol, and Agreement, regardless of its title or form.

•George Schwarzenberger opines that “Treaties are agreements between subjects of International Law which create a binding obligation.”

2. Treaty Contracts (Entered into between 2 or more States; binding only on the signatories).

•Oldest and the original source of International Law.

•The words Custom and Usage are often erroneously used synonymously.

•Usage means those habits which are repeated by States. It is the early stage of Custom and does not have the force of law.

•Usage often fructifies into Custom, which has the force of law.

•Some customary international laws rise to the level of jus cogens through acceptance by the international community as non-derogable norms or rules.

•States are bound by the norms of jus cogens regardless of whether or not they have codified these laws domestically or through treaties.

•Jus Cogens includes the prohibition of genocide, piracy at sea, slavery as well as slave trade, torture and wars of aggression.

In West Rand Central Gold Mining Ltd. Co. Vs King (1905) 2 KBD 291, The KBD of UK High Court held that for establishing a valid international custom, it is necessary to prove by satisfactory evidence that the Custom has received general consent of the States and that it is not opposed by any civilized State.

In Portugal vs India, The ICJ held that if any practice has been followed by 2 States amongst themselves for a long time, it becomes a binding customary rule between them.

This source helps International Law to adapt itself to the changing times and circumstances. It can be interpreted in 2 ways, i.e.,

In The United States vs Schooner Amistad (1841) 40 US 518, The US Supreme Court ruled against the international slave trade and held that international law should be based on general principles of law recognized by civilized nations.

ICJ is not bound by its own decisions and as per Art. 59 of ICJ Statute, its decisions are binding only on the parties to the dispute. The advisory opinion of ICJ is also not binding.

2. When they are recognized and accepted as Customary International Law.

Views of renowned jurists also contribute towards the development of International Law.

In Paquete Habana Case [(1900) 175 US 677], In this case, Justice Horace Gray of the US Supreme Court observed that “where there is no treaty or judicial decision, resort must be had to the works of jurists and commentators who by years of labour and research have made themselves well acquainted with International Law.”

6. Decisions or Determinations of the Organs of International Institutions

•This source is not listed in Article 38 of the Statute of the ICJ. •At that time, International Institutions and international organizations had not assumed vital importance. •It was developed later on. It has been accepted as a source of International Law in the modern era. •After the estd of UN, most of the development of International Law has taken place through I.O.’s and I.I.’s. For ex: FAO, WHO, ILO, ILC, ICAO, etc.

•Art 38(2) of the Statute of ICJ provides that “Art 38(1) shall not prejudice the powers of the Court to decide a case ‘ex aequo et bono’ (just and fair according to equity and good conscience) if the parties agree thereto.”

•It allows the Court to go beyond the law for doing justice in a case.

In Burkina Faso vs. Mali (Frontier Dispute Case) (ICJ, 1985), The ICJ held that an International Court can decide a dispute ‘ex aequo et bono’ (according to equity and good conscience) and go beyond the law only if such power has been conferred on it by mutual agreement between the parties to the case.

B. Secondary Sources of International Law

•Mutual relations of States are based upon comity (reciprocity).

•When a State treats others in a particular way, the other States also generally treat it in that manner.

•These practices also help in the development of International Law. For ex: extradition of fugitives on the basis of reciprocity.

•States have diplomatic relations with each other.

•They exchange letters, which are sometimes published. For ex: Demarche, Note Verbale, etc.

•These letters reveal that certain principles are continuously followed by States in their mutual intercourse.

•These principles also help in the development of International Law.

•Many international matters are resolved on the advice of Law Officers of the Government. •Sometimes, such advice is also treated as a source of International Law.

When there is no treaty or rule of international law to resolve a dispute, the Court applies judicial reason.

•Equity implies fairness and reasonableness. As a branch of law, it developed side by side of the common law of England.

In the North Sea Continental Shelf Case (ICJ Reports, 1969), the ICJ observed that “whatever may be the legal reasoning of a court of justice, its decisions must always be just and equitable.”

In Nicaragua vs USA (ICJ, 1986), the ICJ held that “the sources of International Law (primary sources) are not hierarchical, but complementary, supplementary and inter related.”