Right To Information For Good Governance 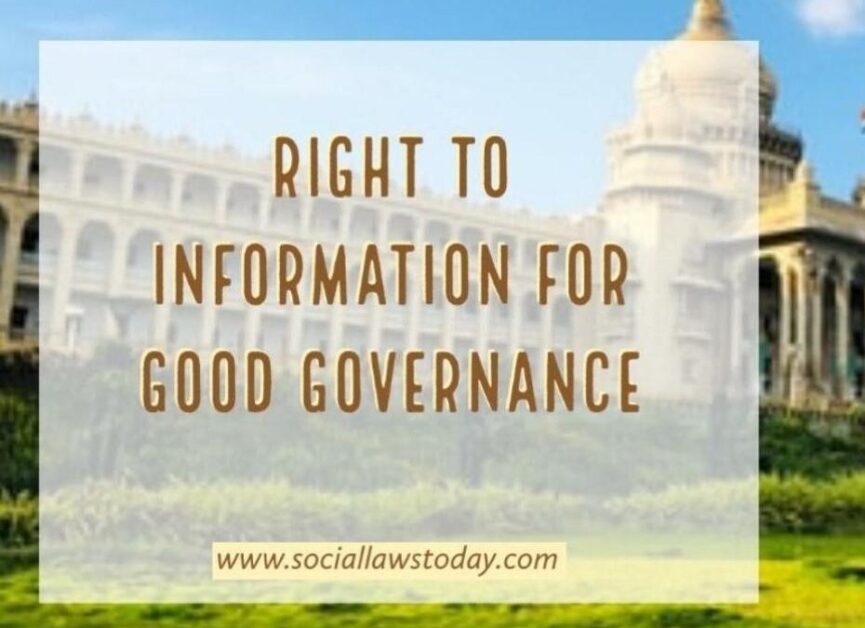 In Democratic administration transparency and accountability is very necessary. Information is imperative for every citizen to live in the civilized structure of society and to maintain its democratic balance. To dispense information to every citizen, a legislative pronouncement was done i.e. Right to Information Act, 2005. The right to Information is our fundamental right according to Art 19(1) of the Constitution of India. This Act became a way for all the citizens if India for promoting, protecting, and defending their right to know.

Information is a way to measure the growth and development of a country.  Till 2005, the people of India had no access to any information managed by government Authorities. Matters related to the public interest was not easily accessible to citizens. Due to which it was very difficult for citizens to participate in any social, political, or economic matters which concerned. So, an Act came into force i.e. Right to Information.

The Right to Information Act 2005 came into force on 12th of October 2005. This Act extends to the whole of India. Before this, 9 states i.e, Delhi, Rajasthan, Madhya Pradesh, Maharashtra, Karnataka, Tamil Nadu, Assam & Goa had already passed as a state Act. The main objective is to set up such mechanisms that facilitate easy access to information & data and to minimize corruption and to ensure people’s participation in governance and decision making of Government. Citizens of India have a right to know about government affairs. But this right is not absolute which means the information which is against public interest cannot be disclosed.

The Supreme Court says that people can’t speak or express their views unless they know. So, the Right to Information is inserted in Article 19. Further, the Supreme Court said that India is a democratic country they have a right to know how the government, meant to serve them, is functioning. Every citizen of India pays tax. Even a beggar pays tax in form of sales tax, excise duty, etc. when they buy products from the market. Citizens of India should know how their money was spent.

These principles cases conclude that the Right to Information is our Fundamental Right.

THE NEED OF RIGHT TO INFORMATION FOR GOOD GOVERNANCE

Also Read: How to File a Consumer Complaint in India?

The enforcement of this Act was a landmark in the history of public administration.  This Act brought accountability, a responsibility to the development process in rural areas.  The right to Information Act helps in controlling and try to minimize corruption and also delays in the implementation of programs by the Government.  Information and Knowledge are the basic needs for improving the quality of life. Before this Act came into action, enforcing the accountability of public authority was very nominal.  The people who paid taxes, their vote had no legal rights to know about the system.

Transparency, Accountability, Predictability, and Participation are the elements for the good governance of Government.  Through the Right to Information, citizens are getting to know about the Government & its working. Transparency is necessary for good governance. Transparency means information is available to the general public and there should be clarity about the functioning of Government.  Same as Transparency, Accountability is necessary for good governance. Without this, there is zero development of a Nation. Even private institutions are also accountable to the public.   Through accountability, the political and government officers are answerable to their actions, performance, etc.  The participation of both men and women is the cornerstone of good administration. We live in a democratic country where decisions should not be taken by a few people but every person’s participation is necessary. Without participation Right to Information has a setback. The citizen who knows about public affairs and what government is doing can give his opinion on such issues, so they can participate in the matters of government.

Corruption in India has been a major issue. Corruption is there in both, at the administrative level and political level. The right to Information helps in reducing corruption.

It is known to all of us that in rural areas people are less aware of knowing and executing their rights which raise corruption rate at public works in the rural area. The Act like the Right to information helps in curbing corruption and gives the people their shares of Interest which the government assure them to give. This Act is influencing the rural people to come forward and question the progress of various welfare schemes. So that there will be an improvement in backward areas and hence helps the government to improve its system.

The realization of people’s rights is based on a democratic society, where the individuals are equipped with information and knowledge, can probe the working of their government, and participate in the governance of the community. In the end, the Right to Information is a tool, as it gives the privilege to get information from the legislature with which residents can get enabled by getting a weapon to consider the legislature responsible, take an interest in administration, and can practice their rights and privileges. The enactment of the Act does not mean that its implementation has started effectively. Civil society organizations, NGO’s and others should ensure effective execution.

“Where a society has chosen to accept democracy as its creedal faith, it is elementary that the citizens ought to know what their government is doing.”