THE ADVERSITY ON TRANSGENDERS AMID COVID-19 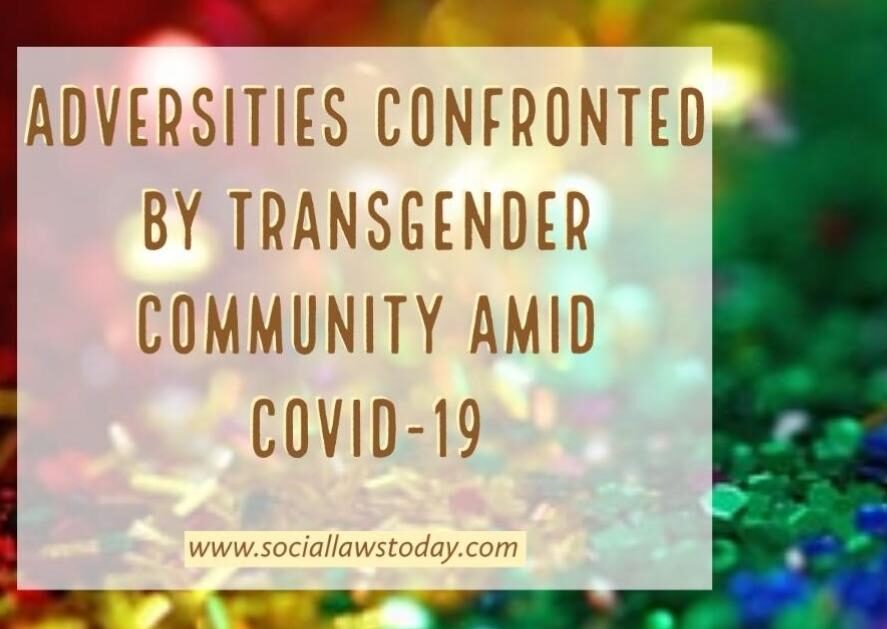 In Hyderabad posters were stuck on the walls which warned the citizens about transgender community being the carrier of the COVID-19 virus and precautions such as evicting them from their houses and maintaining no point of contact with them were mentioned in such posters.

The Covid-19 pandemic has abominably shaken India drastically. It has placed deleterious effects on all the citizens of the country such as business persons, corporate job holders, labourers or migrant workers, etc. Most of them have exhausted their source of earning bread for their families.

The situation at the time of this global pandemic has further imposed detrimental effects on the community, worsening their position in the social milieu than before. The community’s plight has yet ‘again’ been imperceptible to acknowledge by the state and the people as well.

The transgender or the “Hijra” community’s primary source of income is generated from practices such as blessing a newly-born child or a newly-wed couple, begging, dancing and proscribed prostitution.

Throughout the four stages of lockdowns as announced by the government, they were ineffectual to generate revenue or earn for their sustenance through such means.

A significant population of the community was quarantined in their place of living without any indispensable necessities to sustain themselves.

The government at such tumultuous times undertook relief measures for the community, but it proved to be an unplanned majoritarian relief measure.

Also Read : TIMELINE FOR THE RISE OF RAINBOW By HPNLU, Students.

This was certainly proved when Tamil Nadu government announced relief measure of one thousand rupees each to only those community members who had been issued identity cards by the government in furtherance of Section 5 and 6 of the Transgender Persons (Protection of Rights) Act, an ‘Act that has sworn to protect the community.’ The transgender persons who didn’t possessed the identity cards were not given this ration aid. Moreover, the relief was scanty than what the community required.

The most imperative aid that the government should have irrefutably provided to the transgender persons is the medical facility, considering their infirm immune systems but at this stage of pandemic, in India only the affluent citizens of the country are receiving an immaculate treatment.

The community is being shunned from this pivotal facility firstly, because of discriminatory practices towards them from medical institutions secondly, a predominant portion of community’s population lack healthcare insurance documents and the identity cards issued by the government for transgender persons.

The government till now doesn’t possess a satisfactory amount of authenticated surveys or data that portrays a rational understanding towards community’s quality of life and is even disregarding the surveys and findings of Census 2011 where it has been precisely mentioned that only 46% of the community’s population is educated in comparison with 74% literacy in the general population.

All such factors are emboldening the common plight of the community that is marginalisation from the society and ostracization from certain schemes involving allocation of ration and pension aid from the government.

The community is also caught in the web of social exclusion, violence and is withal a paramount observer and bearer of hate crimes.

There is a well-knit burgeoning stigma attached to the community nowadays, that they are the carriers of the virus COVID-19, and transphobia which has been prevalent in the society interminably has fundamentally given boost to this myth.

Hate-mongering of which they were the victims of since remote ages has increased at the time of pandemic and this has led to ousting of transgender persons from their rented houses.

In Hyderabad posters were stuck on the walls which warned the citizens about transgender community being the carrier of the COVID-19 virus and precautions such as evicting them from their houses and maintaining no point of contact with them were mentioned in such posters.

Apart from that even Pradhan Mantri Garib Kalyan Yojana hasn’t given any cognizance to the community and hence, it has clearly promulgated their ‘invisibilization’ amidst this pandemic.

The government amidst this pandemic issued a circular on 18th April that invited people’s suggestion to mend the underlying criticism in the Transgender Persons (Protection of Rights) Act. The last date for submitting the comments and suggestions for the same was 18th May 2020, where every citizen of the country was under a lockdown period and had to abide by its rules.

The comments had to be submitted online, and a majority of transgender persons despite being prominent stakeholders of this Act could not submit their suggestions as they were not having access to technical support such as electronic devices or the internet. Furthermore, they encountered language barrier issue as English was the medium of language chosen by the government for filling this form and the community was not fluent in understanding the same. Moreover, the crucial criticisms and loopholes in the Act relating to medical assistance, lack of measures to tackle discrimination upon the community, lack of explanation about the facilities at rehabilitation centres for the community haven’t been constructed yet.

The rules in the Act after being amended fail to affirm with NALSA judgement especially Section 5 and 6 of the Act that mandates and elucidates the process of identification that the members of the community shall undergo to get an authorisation that they are transgender and can now avail fundamental benefits as enshrined in the Act.

Now that right of privacy is an intrinsic part of the fundamental right, right to life and liberty therefore, Section 5 and 6 of the Act imposing gender identification process upon the community abominably violates Right to Life of the transgender persons.

It is a lament situation that the state and citizens of this developing nation inflicts exasperating setbacks on the transgender community and further antagonize them altogether from the social milieu. Holistic measures should be adopted to curb such iniquitous facets of the society. Some of the suggested measures are as follows-:

1. The medical facilities or institutions in the country should work comprehensively amidst this pandemic. Therefore, it should be free from its set prejudices towards the transgender persons and certainly the discrimination which arises out of it.

2. The state has to be pestered from all the citizens of the country to make it comprehend its obligation towards providing the transgender community with livelihood amidst this pandemic. The activists and human rights organizations cannot always protect the community and protest for their fundamental rights without people’s support.

3. It is imperative for the judiciary to safeguard the rights of the community. Supreme Court should take suo motu cognizance to reiterate the right of self-identification as per NALSA judgement and ameliorate and rectify the shortcomings of such rule in the Transgender Persons (Protection of rights) Act.

4. Media should be invigorated to influence people’s mind by demonstrating a broader pragmatic approach towards the transgender community and addressing their hardships at the same time.

India has been oblivious of the privation that the transgender community is encountering amid this pandemic. The community so far has been acutely prone to social-exclusion and has been traumatized enough. It is expected from the government to take measures for the progress of the community.

In the 21st century that being the revolutionary period of humankind it is peremptory to divulge the stoicism of the community not only in due course of this pandemic but also in the longer run. The laws cannot always safeguard the community it is also the people’s responsibility to reorient their stigmatic minds into liberal ones. Moreover, to impede upon malignant facets of the society, it is imperative that the policymakers and the citizens collectively work for the progression of the transgender community.