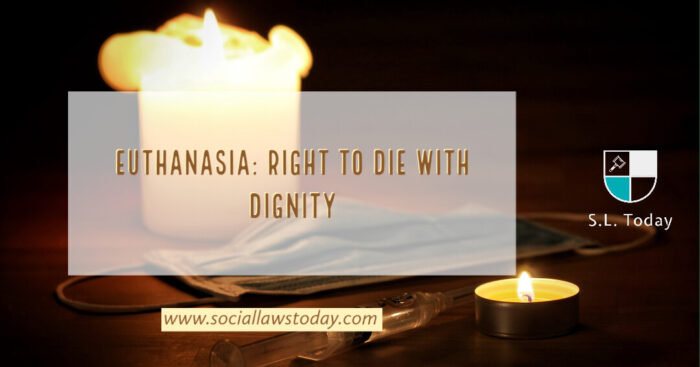 In India Euthanasia is least discussed topic in general public even in law Society. After the landmark case of Aruna Shanbaug, this topic emerged as a most discussed topic in Indian Judiciary. Firstly, let us discuss the emergence of euthanasia the word “Euthanasia” derived from Greek which resembles “Eu” as “good” and “Thanatos” as “death” means good death. It is also known as Mercy Killing. In the 17th Century, Francis Bacon used this in the medical context to refer to an easy, painless and happy death.

“According to the World Medical Association Euthanasia means: “Deliberate and intentional action with a clear intention to end another person’s life under the following conditions: The subject is a competent informed person with incurable illness. Who voluntarily asked for ending his life. The person who is acting knows about the state of this person and about his wish to die and is doing this action with an intention to end life of this person. The action is done with compassion and without any personal profit.”[1]

After the Judgement on Landmark case Aruna Shanbaug, the Indian Government introduced legislation named “The Euthanasia (Regulation) Bill,2019 in Lok Sabha. It still needs to be passed by both Houses of the Parliament and to receive the President assent to become Act. In India Active Euthanasia is still illegal above-mentioned Legislation is based on Passive Euthanasia. So, readers let’s dive into this core of the topic.

Euthanasia in other Countries:

Since 1981 Netherland recognizes both Voluntary Euthanasia and Doctor-Assisted Suicide but it was legally acknowledged in the year 2002 and patient need not be terminally-ill. It is initially allowed by the guidelines prepared by main legal and medical organizations. In this country, about 3% of deaths occurred due to voluntary euthanasia and these are reported.

In 2014 the province of Quebec adopted legislation regarding doctor-assisted suicide and the federal government took similar steps in 2016. The sufferer should be competent to give consent and should be adult. Sufferer suffering from a grievous or irremediable condition and whose death is reasonably foreseeable receives medical assistance to die. They use the term terminally ill means expected to die within the period of six months but Canada is in the process to review their law and extend to cover patients who are incurably ill but not terminally ill.

“In 1997 Oregon became the first state to legalize doctor-assisted suicide for terminally ill adults (those with a prognosis for survival of six months or less).  Later, in 2008, Washington State adopted essentially the same law followed by Vermont (2013); California (2016); Colorado (2016); Washington DC (2017); Hawaii (2018); New Jersey (2019); and Maine (2019).  In Montana, its Supreme Court, in 2009, agreed that doctor-assisted suicide could be allowed. In these States, while a doctor has to write a prescription for the necessary medication, a healthcare professional need not be present when the terminally-ill patient decides to die.  All these States require a fifteen-day period between two oral requests and a two-day waiting period between a final written request and the dispensing of the prescription.”[2]

By concluding all the above matter, I just want to state that this legislation will free people from suffering and gives the right to die with dignity. In this people will not be kept alive forcefully they will be given painless death. It is good to die without any pain rather than living forcefully with pain. Legislation on this topic may be amended to remove any loopholes if exists. It is just my views.

[2] Assisted Dying in other Countries, My Death My Decision, https://www.mydeath-mydecision.org.uk/ info/assisted-dying-in-other-countries.

Very nice write-up. I definitely appreciate this website. Thanks!

Your website is remarkable. Kindly provide a backlink if possible. at https://sociallawstoday.com/
Thanks