Daughters Right to property: An Analysis 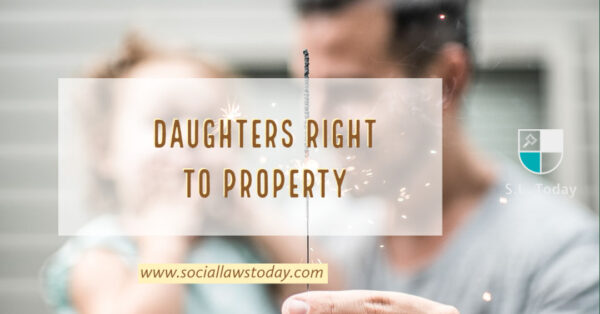 Backing women’s share in parental property, the SC held that a daughter will have the right to property albeit her father died before the Hindu Succession (amendment) Act 2005 came into force.

India is developing but people’s mindset is the same which was before. People think that daughters are not their own when they get married, so they give their property to their son but now both are equal as daughters also take care of their parents. There is no rule that only sons will take care of them. These rules are made by society and now everything should change. The Supreme Court of India during a recent judgment stated that the daughters cannot be deprived of their right of equality according to Section 6 of the Hindu Succession Act, 1956. Judgment was given that the daughters have an equal right. The Supreme Court also stated that since the proper in coparcenary is by birth, it’s not necessary that the father coparcener should be living as on 9th Sep, 2005. The judgment was given by Justice Arun Mishra during a Bench comprising Justice S. Abdul Nazeer and Justice M.R. Shah also.

The Hindu Succession Act was amended within the year 2005 for removing the discrimination contained in Section 6 of the 1956 Act where daughters have equal rights within the Hindu Mitakshara coparcenary property because the sons. Section 6(4) provides that a daughter is liable within the same manner as a son under the Hindu Law to discharge the debts.

By deleting Section 4(2) of Hindu Succession Act, women’s inheritance rights in agricultural land became adequate to that of men. Within the north western states, these laws were highly gender unequal and gave primacy to male lineal descendants within the male line of descent. Women came very low within the succession order and got only a limited estate.

This right is also provided to daughters, who are born earlier with effect from Sep, 2005.  It was observed that the statutory fiction of partition created by proviso to Section 6 of the Hindu Succession Act, 1956 as originally enacted did not lead to the actual partition. The fiction was just for the aim of ascertaining the share of deceased coparcener when he was survived by a female heir, of Class-I as laid out in the Schedule to the Act of 1956 or blood brother of such female. It had been made clear by the Supreme Court that the provisions of the substituted Section 6 are required to tend full effect.  The most recent decision of the Supreme Court on the right of Hindu daughters within the interpretation of a crucial 2005 amendment to the Hindu Succession Act, 1956. The apex court said daughters have rights from their birth. It’s rejected the common misinterpretation that only daughters of coparceners who were alive thereon day could get an equal share in property. Changes occur from September 9, 2005. This led to the interpretation that the daughters’ coparcenary rights, being prospective, had not come into effect when both the coparcener father and his daughter were not dead.

The court’s reasoning is unexceptionable. The legislative aim was that a flagrant discrimination between sons and daughters in entitlement to an equal share in coparcenary property, that is property inherited from one’s father, grandfather or great-grandfather, should be done away with.

The central government had taken the view that the father being dead or alive on the date of the amendment doesn’t have any impact on the rights of the daughter. “The daughter of a coparcener in Section 6 does not imply the daughter of a living coparcener or father, as the death of the coparcener/father does not automatically lead to the end of coparcenary, which may continue with other coparceners alive,’’ Solicitor General Tushar Mehta argued during the hearing. “The coparcener, from whom the daughter is inheriting by her being coparcener, need not to be alive as on the commencement of the amendment act of 2005.’’

The Hindu Succession Act was amended in the year 2005 which gives daughters equal rights in their ancestral property. The SC on Tuesday said a daughter can claim equal share in family property regardless of whether her father was alive or not at the time of the amendment. Daughters will have coparcenary rights also.

The judgment holds significance because the SC held that rights under the amendment are applicable to living daughters of living coparceners as on September 9, 2005, regardless of once they were born.

A Supreme Court bench had said the amended Hindu Succession Act of 2005 said that the daughter will be coparcener from birth.

A bench of Justices Arun Mishra, S Abdul Nazeer and M R Shah said that whether the father is alive or not, daughters will get equal property.

“It is merely a case of enlargement of the rights of daughters. The rights of other relatives remain unaffected as prevailed within the proviso to Section 6 because it stood before the amendment,” the SC said.   It was also clarified that the newly-conferred rights through the judicial interpretations wouldn’t be available to reopen alienation of ancestral property done so earlier through existing coparceners.

Coparcenary property is that property which is inherited by a Hindu from his/her father or their grandfather/grandmother. Only a coparcener has the proper to demand partition of property. Share during a property increases or decreases by death or birth during a family.

Analyzing the Mitakshara system applicable in various forms to property owned by Hindu families, Justice Mishra quoted a standard saying noted during a 1996 judgment of the SC to sum up the bench’s view towards daughters, “A son may be a son until he gets a wife. A daughter may be a daughter throughout her life.” The Centre, through lawman Tushar Mehta, had unequivocally conveyed that coparcenary was a birthright of daughters. Justice Mishra elaborated thereon and said if daughters had a birthright, it might be incongruous to constrain it with the condition that to enjoy that right, her father must be alive. So daughters will get equal rights as son.