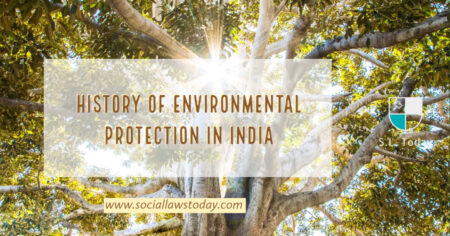 The concept of environmental protection is an age old idea imbibed in the Indian cultural ethos since time immemorial. To understand the present-day legal system for environment protection and conservation of natural resources, it is important to look into the past Indian traditions and practices of protecting the environment.

While environmental problems resulting from industrialisation have increasingly become scientific, political, ethical as well as social priorities at local, national, regional and international level, in the last twenty years in liberal democracies a general consensus has grown around the need for an increased involvement of the public in environmental law and policy.

In connection to the notion of sustainable development, already in the Rio Declaration it was held that ‘environmental issues are best handled with the participation of all concerned citizens at the relevant level’.

The importance attributed to this statement at European level is symbolized by the recent enactment of the Aarhus Convention, hailed by Kofi Annan as ‘the most ambitious venture in environmental democracy undertaken under the auspices of the UN.

The evolution of environmental protection in India can be divided into four time periods:

Environmental awareness can be said to have existed even in the pre Vedic Indian valley Civilization which flourished in northern India about 5,000 years ago. This is evident from the archaeological evidence gathered from Harappa and Mohenjo-Daro which were the prominent cities of the civilization. Their awareness about hygiene and sanitation is evident from their constructions of ventilated houses, orderly streets, numerous wells, bath rooms, public baths and covered underground drains. Protection and cleaning up of the environment was the essence of Vedic (1500–500 BC) culture.

Charka Samhita (medical Science book of 900 BC – 600 BC) gives many instructions for the use of water for maintaining its purity. Under the Arthashastra written by Kautilya(an ancient book  on statecraft, economic policy and military strategy), various punishments were prescribed for cutting trees, damaging forests, and for killing animals and environmental ethics of nature conservation were not only applicable to common man but the rulers and kings were also bound by them.

To Mughal rulers, forest meant no more than woodlands where they could hunt.  The history of medieval India is dominated by Muslim Rulers where no noteworthy development of environmental jurisprudence took place except during the rule of Mughal Emperor Akbar. During Akbar’s rule except rulers, others were prohibited from hunting or shikar.

But no major initiatives took place during the medieval period to prevent environmental protection and conservation of natural resources as the rulers were only interested in war, religion propagation and empire building. Barring “royal trees’ ‘ which enjoyed patronage from being cut except upon a fee, there was no restriction on cutting of other trees, hunting animals, etc. Forests during this period shrank steadily in size.

• Shore Nuisance (Bombay and Kolaba) Act, 1853 imposed restrictions on the fouling of seawater.

• The Merchant Shipping Act of 1858 dealt with prevention of sea pollution by oil.

• The India Constitution adopted in 1950 did not deal with the subject of environment or prevention and control of pollution as such.

• It was the Stockholm Declaration of 1972 which turned the attention of the Indian Government to the border perspective of environmental protection.

• Comprehensive (special) environmental laws were enacted by the Central Government in India.

• The National Council for Environmental Policy and Planning was set up in 1972 which was later evolved into the Ministry of Environment and Forests (MoEF) in 1985.

• The Forest (Conservation) Act, 1980 aimed to check deforestation, diversion of forest land for non-forestry purposes, and to promote social forestry.

•The Environment (Protection) Act, 1986 is a legislation which provides for single focus in the country for protection of the environment and aims at plugging the loopholes in existing legislation.

• The Public Liability Insurance Act, 1991, provides for mandatory insurance for the purpose of providing immediate relief to persons affected by accidents occurring while handling any hazardous substance.

• The Biological Diversity Act, 2002, is a major legislation intervention affected in the name of the communities supposed to be involved in the protection of biodiversity around them.

• Integration of Environmental Concerns in Economic and Social Development

• Efficiency in Environmental Resource Use

• Enhancement of Resources for Environmental Conservation.

• Human Beings are at the Centre of Sustainable Development Concerns

• Environmental Protection is an Integral part of the Development Process

In a nutshell the policies regarding the environment has changed very rapidly through legislations as well as the judicial interpretations but still there is need of further growth and development in this regard.

As a result, PIL filed by concerned citizens or non-governmental organisations based on the fundamental right to a clean environment, is routinely filed in the courts, and has to a large extent influenced environmental law in India.

I found your blog website on google and test a couple of of your early posts. Continue to maintain up the superb operate. I simply additional up your RSS feed to my MSN News Reader. Seeking forward to reading more from you in a while!?