MEDIA TRIAL CASES: ALL YOU NEED TO KNOW 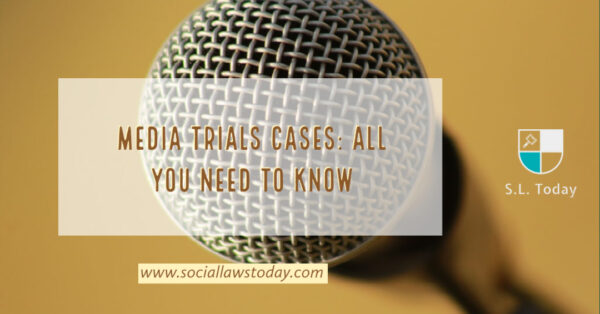 “The news media are, for the most part, the bringers of bad news… and it’s not entirely the media’s fault, bad news gets higher ratings and sells more papers than good news.”

There is no denying the fact when talking about the importance of media especially in the Indian context whether it comes to bringing the news before the masses or changing the opinions of the people in the way they perceive things. Media as we all know is regarded as the fourth estate or the fourth pillar to the democracy.

But the term trial in normal parlance means a proceeding before a court of law in order to obtain justice, thereby meaning that media cannot take in the same role. But media is often seen undertaking this role of taking up the trials just like an judicial forum and then even passing a verdict as per the facts of the case.

The hon’ble Supreme Court of India has time and again taken a note of the same and even highlight the consequences of such trials by media in these following words:-

“The impact of television and newspaper coverage on a person’s reputation by creating a widespread perception of guilt regardless of any verdict in a court of law is wrong. During high publicity cases, the media are often accused of provoking an atmosphere of public hysteria akin to a lynch mob which not only makes a fair trial impossible but means that regardless of the result of the trial, in public perception the accused is already held guilty and would not be able to live the rest of their life without intense public scrutiny”[1]

The same was also reiterated by the Apex Court in the case of State of Maharashtra v. RajendraJawanmal Gandhi[2]

“A trial by press, electronic media or public agitation is very antithesis of the rule of law. It can well lead to miscarriage of justice”

But when a sensational criminal case comes up for investigation before the police or foradjudication in a subsequent trial before the Court, the usual question asked is “Is the media expected to be a silent spectator insensitive to the happenings around and failing to quench the public curiosity about the case ?”

ALSO READ: What are the Essentials of the Valid Contract in India

It is to be kept in mind that people are the only censors of their own representatives who rule them and, therefore, people should be given complete information of the affairs of the representatives through the channels of public domain.

It is true that a free, independent and fearless Press is the sine qua non of a vibrant democratic society in a free country where there is no dictatorship or throttling of dissemination of news. It is the right to know of the public which is served by the print and electronic media.

The High Court of Kerala highlighting the same in Re M.V. Jayarajan[3] observed thus:-

The above case was one in which the media was both appreciated as well as criticized.It was appreciated for the salutary role in bringing the issue of contempt of court to the publicdomain and criticized for its role in holding a discussion and public debate of the issues which were sub-judice.

Freedom of the Press is thus a derivative of the citizen’s fundamental right to freedom of speech and expression as enshrined in Article 19 (1) (a) of the Constitution of India. This means that themedia does not enjoy any power larger than that of the general public whom they represent.

However, there are always two sides of a coin. With this increased role and importance attached to the media, the need for its accountability and professionalism in reportage cannot be emphasized enough. In a civil society no right to freedom, howsoever invaluable it might be, can be considered absolute, unlimited, or unqualified in all circumstances.

The freedom of the media, like any other freedom recognized under the Constitution has to be exercised within reasonable boundaries. With great power comes great responsibility. Similarly, the freedom under Article 19(1) (a) is correlative with the duty not to violate any law.

In an increasingly competitive market for grabbing the attention of viewers and readers, media reports often turn to distortion of facts. The pursuit of commercial interests also motivates the use of intrusive newsgathering practices which tend to impede the privacy of the people who are the subject of such coverage.

The problem finds its worst manifestation when the media extensively covers sub judice matters by publishing information and opinions that are clearly prejudicial to the interests of the parties involved in litigation pending before the Courts.[4] Moreover, the liberty of speech and expression should recall that the said liberty is constitutionally hedged in by the limits laid down in Article 19 (2) of the Constitution of India.

In recent times there have been numerous instances in which media has conducted the trial of an accused and has passed the verdict even before the court passes its judgment. Some famous criminal cases that would have gone unpunished but for the intervention of media, are PriyadarshiniMattoo case, Jessica Lal case, NitishKatara murder case and Bijal Joshi rape case. The media however drew flak in the reporting of murder of AarushiTalwar, when it preempted the court and reported that her own father Dr. Rajesh Talwar, and possibly her mother NupurTalwar were involved in her murder, the CBI later declared that Rajesh was not the killer.[5]

“We do appreciate that in respect of some cases (largely criminal cases) the justice delivery system in our country progresses virtually at a snail’s pace and often an innocent person has no real remedy available to him, if he in framed in a matter, or is subjected to a ‘trial by media’. As a result, seldom does anyone approach a Court of law for relief either by way of an injunction or for damages in a case of ‘trial by media’. Such being the reality, we are of the opinion that the Courts have a great responsibility and, therefore, need to be far more vigilant and pro-active in protecting the rights and reputation of an individual from an unwarranted ‘trial by media’. In a sense, the Courts have to energize the rule of law. While this may add to the burden of our criminal Courts, we are of the view that it is imperative for the Courts to protect a citizen from what may appear to be victimization. This is certainly the duty if not an obligation of Courts. This is all the more important in a pending matter. For example, if a person is arrested on the suspicion of having committed a crime, it is not the function of the media to ‘declare’ him (by implication) innocent or guilty. That is within the exclusive domain of the judiciary. But if the accused is subjected to a ‘trial’, either through the print or audio-visual medium, it may subconsciously affect the judgment of the Judge, and that may well be to the prejudice of the accused, which is, in our justice delivery system, presumed innocent until proven guilty. In such a situation, the Judge must be pro-active by restraining the media from carrying out a parallel trial. Otherwise our criminal justice delivery system will be completely subverted.”

HOW TO GET VOTER ID CARD?