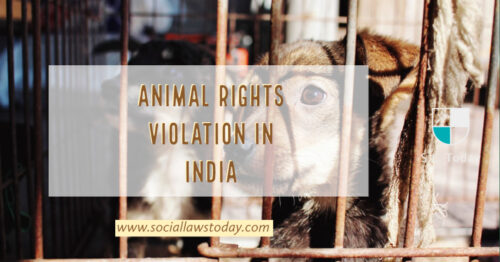 In India, culture and traditions are vibrant, colourful and rich. Most Indians take their religions and gods associated with their religion too seriously. People have built countless temples and other religious places across the country probably to express their devotion and faith towards the divine. The Indian people treated animals as equal to god. Hinduism is the only religion in which various animals are closely related to God, and some are worshipped as one of them. In Hinduism, Aranyani is a goddess of the forests and the animals that dwell within them. Ans also said that when Brahma created the animals, he hid a specific secret in each of them to signify their spiritual importance to humans. Hindus regard all living-creatures as sacred-mammals, fishes, birds and more. Animals have rights that must be respected. Rights are much more important than interests, because rights impose a burden on others that the other parties must accept. If animals do have rights then there are certain things that human beings should not do to animals, because doing them would violate the animal’s rights. There are certain rights which will safeguard the animals for their welfare.

Animal protection laws can be enacted and enforced at every level of government. Most animal protection legislation happens at the state level. There are also a handful of federal animal protection laws. Additionally, some cities and counties pass ordinances to protect animals. Under Article 48 A and Article 51A (g) of the Indian Constitution that prohibits hunting of wild animals except in certain limited circumstances.

India first embarked on its endeavours to promote animal welfare and ensure animal safety with the enactment of the Prevention of Cruelty to Animals Act in 1960 (‘the PCA Act’). Since then, there has been a sustained movement towards animal welfare in the country. There has been significant progress as a result of these events, which is seen in the development of various laws and policies like those on the treatment of performing animals and the ban on animal testing of cosmetics. To prevent the infliction of unnecessary pain or suffering on animals as well as to prevent the cruelty to animals under Section 3 and 11 of this Act.

The Animal Welfare Board of India is a statutory advisory body to the Government established in 1862 under section 4 of this Act.

The Act provides for the protection of wild animals, birds and plants. Main objectives of this act are Prohibition of hunting, Protection and management of wildlife habitats, Establishment of protected areas, Regulation and control of trade in parts and products derived wildlife and Management of Zoos. It has six schedules which give varying degrees of protection.

According to this rule – Bans import of Cosmetic products that have been tested on Animals.  Any person violates this act that person shall be punished for 3 to 10 years or liable for fine up to Rs. 500 – 10,000.

The Animal Protection Rules, 2001 provide for rules relating to pets and street dogs. Animal Birth Control Rules 2001 – Dogs can be sterilized only after attaining the age of 4 months and no sterilized dog can be relocated from their area.

On 04.09.20, A group of men beat twelve puppies to death in Goregaon. A man in Uttar Pradesh poured acid on five newborn puppies and their mother. A pregnant goat dies after an alleged gang by 8 men in Haryana. 106 websites are being used for illegal wildlife trade. The list collated by India’s Wildlife Crime Control Bureau (WCCB). Wild animals illegally traded in the country increased from 400 in 2014 to 465 in 2016.

There are 19,028 animal cruelty cases were spot out in Mumbai in Mumbai over 5 years but no single arrest was happened. On February 26, 2020 – Eight animals were electrocuted due to the power leakage from high tension line Cheramabadi range in Gudalur. Reason behind this incident was lack of maintenance.  On April 23 a resident of Amantran building kicked a docile seven-years-old female dog so hard.  Due to the actions made by the person, the dog died.  May-13,2020 – Number of people used to hunt wild animals especially in the Nilgiris forest division. The Forest official said that people were involved to hunt jungle fowl, black-naped hare and also some rare species such as sambar deer.

On May 25, In Dadh village of Bilaspur district of Himachal Pradesh – A person allegedly feeding a pregnant cow wheat flour laced with explosive substances.  In May 2020, two teenagers in order to make a tiktok video tied up a dog and drowned it in a pond, resulting in its death.  On June 06, 2020 – A pregnant elephant was allegedly killed after being fed pineapple stuffed with crackers by a local resident in Pallakad district.  July 4, 2020 – A cow has been raped in Bhopal’s Sunder Nagar area by 55-year-old Sabir Ali.  Every year more than 30,000 dogs are illegally transported by trucks in north eastern of Nagaland and Mizoram for meat. Consumption of dog meat is illegal. However, Hundreds of dogs are killed brutally for the meat trade.

In the year 2014, the Animal Welfare Board of India drew up a fresh draft “Animal Welfare Bill, 2014”. It incorporated substantially higher penalties for animal abuse, but yet it was not passed by parliament. The Prevention of Cruelty to Animal Act 1960 came into force in the year of 1960 with the aim to prevent infliction of unnecessary pain and suffering on animals and its penal provisions have not been revised since.

Bombay Society for Prevention of Cruelty to Animals said that law is too weak to deter them.  While cruelty to pets and animals is punishable offence under Punishment for cruelty to Animals Act, 1960 which the fine will be measly Rs.10to100. The BSPCA inspector said that a horrific case happened last year. A four people were arrested for beating a cow. The bail bond for being arrested cost about 4,000 rupees but the court left them with a fine of Rupees.50. On June 7, 2020- PETA (People for the Ethical Treatment of Animals) the Government of India to strengthen the laws established to protect animals. As per the current laws set out against animal cruelty, the perpetrator would only be charged Rs.50,000 as a fine.  That is equivalent to no punishment at all.  India have to revise the fine for animal cruelty. Many of the people who were not aware of wildlife and its importance.  People should be educated by proper means and mainly by setting up training camps to educate them.

Animals play an important role in people’s lives. Animals should be treated with respect and dignity, and this right to decent treatment is not upheld when animals are exploited for selfish human gain. Animal testing should be eliminated because it violates animals’ rights, it causes pain and suffering to the experimental animals, and other means of testing product toxicity are available. Protect the animals which are the most valuable companions in human’s life.

[…] to Vanderbilt University, dogs can decrease levels of human loneliness and give humans a sense of purpose as they care for the…This can be especially beneficial for people who live alone, don’t socialize much, are […]