TRIBAL RIGHTS IN INDIA AND JUSTICE 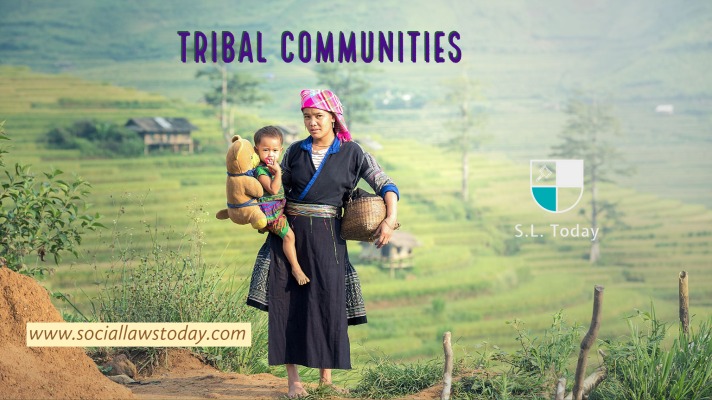 By: M.Mohanapriya : TRIBAL RIGHTS IN INDIA

A group of people of the same race, and with the same customs, language, religion, etc. living in a particular area and often led by a chief.  They are known by various names such as primitive tribes, aborigines, natives, animists, jungle people, adivasis, indigenous people, original inhabitants of India[1].

According to the 2011 Population census, Adivasis constitutes a total population size of 104 million, constituting 8.6 percent of the India population, making them the world’s largest population of Indigenous People.

Article 3 of the convention provides “Indigenous and tribal peoples shall enjoy the full measure of the human rights and fundamental freedoms without hindrance or discrimination.”

Article 5 of the Convention protects the social, cultural, religious and spiritual values and practices of Tribal peoples.

Article 14 recognizes right to ownership and possession of the peoples concerned over the lands which they traditionally occupy and to define their own priorities for development.

Article 26 to 31 of the Convention concerned with the “Education and means of communication.” Measure shall be taken to ensure that members of the peoples concerned have the opportunity at least an equal footing with the rest of the national community.

It was adopted by the United Nations on September 13, 2007.  It prohibits discrimination against ‘Indigenous People.’

Article 46 of the UNDRIP states that “Indigenous peoples have the right to the full enjoyment, as a collective or as individuals, of all human rights and fundamental freedoms as recognized in the Charter of the United Nation, the Universal Declaration of Human Rights(4) and international Law.”  It includes the rights to enjoy and practice their cultures and customs, their religion, and their languages, and to develop and strengthen their economies and their social and political institutions[2].

The International Day of the World’s Indigenous is observed on 9 August every year to strengthen international cooperation for solving problems faced by indigenous people in areas such as human rights, environment, education, health and social development.

A Constitution which guarantees, “The state shall not discriminate against any citizen.

Also Read: How to Perform Love Marriage in Court in India

Rights Of Tribal Communities In India under various other Laws:

The Scheduled Castes and Scheduled Tribes (Prevention of Atrocities) Act, 1989[4]:-

It protects atrocities against Scheduled Tribes and Scheduled Castes.  Chapter II of this Act deals with Punishment for atrocities.

If a person not being a member of Scheduled Caste or a Scheduled Tribes – puts obnoxious substance into the mouth, or dump into sewage, or insult or intent to cause injury (includes hurt, grievous hurt and assault), or commits crime, or garlands with footwear, or parades naked, or wrongfully occupies any land, or wrongfully dispossesses from his land or interferes with enjoyment of his rights, or compels to dispose to carry human or animal carcasses, corrupts or fouls the water of any spring or reservoir used by SC and ST people, or prevent entering into a common property like burial, river, steam, spring, well, tank, road, temple, educational institutions, hospitals, dispensary, primary health care, shop  and entertainment places to Scheduled Tribes or Scheduled Castes[5].

If anyone did above mentioned act that person shall be punished with imprisonment for a term which shall not less than six months but which may extends to five years and fine. It provide to organize seminar on prevention of untouchability with expenditure of Rs.30,000 at district level & Rs.3000 at taluka level.

Panchayatraj (Extension to Scheduled Areas) Act, commonly known as PESA Act.  IT is base for future law making.  States were expected to make/change their laws as per PESA.

It was enacted to enable the Gram Sabhas of the tribal regions to self govern and protect their natural resources. PESA imposed restriction on the State Legislature and decentralized more power in the hands of Gram Sabha or Panchayat[7].

Section 4(d) of the Act states ‘Every Gram Sabha shall be competent to safeguard and preserve the traditions and customs of the people, their cultural identity, community resources and the customary mode of dispute resolution[8].’

An Act prescribes punishment for the preaching and practice of untouchability.  Section 2 of the Act defines civil rights means any right accruing to a person by reason of the abolition of ‘untouchability’ by Article 17 of the Constitution.  If a person prevents any person from entering into any hotel, entertainment places like exhibition, performance, sport, game and place of worship that person shall be punishable with imprisonment and fine[9].

The Scheduled Tribes and Other Traditional Forest Dwellers (Recognition of Forest Rights) Act, 2006 was enacted to protect the marginalized socio-economic class of citizens and balance the right to environment with their right to life.  It protects customary rights of the forest communities and Provide basic developmental facilities for the forest villages.

Indigenous people speak an overwhelming majority of the world’s 7,000 Languages. They help to protect our environment, fight climate change and build resilience to natural disasters.  However, they are the most disadvantaged and vulnerable groups of people in the world and they had been oppressed and exploited and misused by the outsiders.  We need to safeguard them and also our government must continue its commitment for uplifting the present standard of the tribal people.

[4] The Scheduled Castes and Scheduled Tribes (Prevention of Atrocities) Act, 1989.