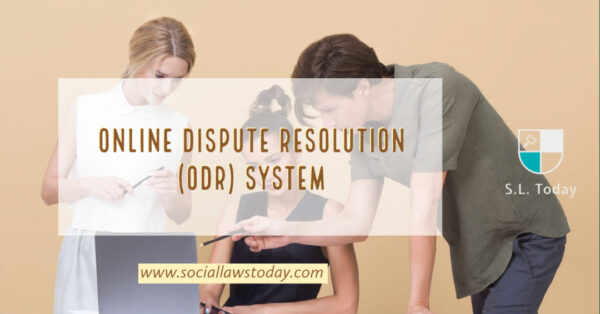 To de-clog, these piled up cases online dispute resolution mechanisms have been proposed by the government and various senior law professionals. But there is a huge problem: all cases can’t be resolved through the online dispute mechanism, it is impossible for serious offence cases to be dealt through online mode.

So, many law professionals suggested that at least medium and minor offence cases should be resolved through this mechanism. It is a huge debatable issue and after considering all the views of professionals the government can take appropriate action on this matter. Let’s discuss and understand the core of this topic.

Alternate Dispute Resolution(ADR) is an alternative to court hearings but with the time ADR itself became complex and expensive. So, ODR is introduced as an alternative to the ADR mechanism in which cases are settled through e-Arbitration, e-Mediation and e-Conciliation.

In the Indian context usage of Online Dispute resolution as a resolution mechanism has a no. of advantages they:-

Online Dispute Resolution in other legislations:

The key points of this initiative:-

By, concluding above all the matter, I just want to create awareness among readers that this Online Dispute Resolution clears so many problems of the judicial process like recording evidence of person living in another state or even country, removes the delay applications filed by parties during the trial by mentioning some reasons, promotes fast-track resolution, removes burden off from the courts etc.

But this concept can only apply for small and medium offences, serious criminal offences cannot be tried using this mechanism; it is an impossible task. Although, it helps in clearing all other cases and removes the burden of courts and clears all pending cases which yet to be tried. Lastly, I want to say that this mechanism will be the life-changing process of our lives.

You can definitely see your expertise in the work you write. The arena hopes for even more passionate writers such as you who are not afraid to mention how they believe. All the time go after your heart.