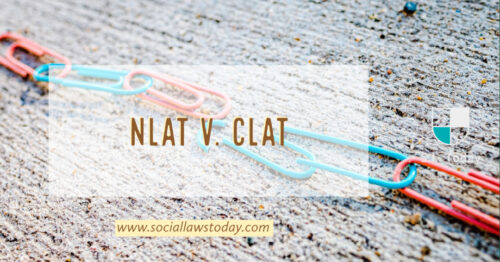 The full form of CLAT is ‘Common Law Admission Test’. CLAT is the centralised national level entrance test for admissions in the 23 National Law Universities of India and is organized by the Consortium of NLUs. According to 2020 National Institutional Ranking Framework (NIRF) National Law School of India University, Bangalore (NLSIU) is ranked first position. Due to COVID-19 there has been unfortunate and unforeseen delay in the conduct of CLAT 2020, because of which in the midst of COVID-19 there was a rift between the NLSIU and the CLAT consortium where NLSIU decided to conduct its own entrance examination on National level for students who wish to pursue their career in law for the current academic year. This has been a very controversial topic discussed in recent days. NLSIU not only faced difficulty in conducting an online exam but it was also restricted from declaring the results and starting off with the admissions. NLSIU announced the conduct of NLAT examination on 3rd September 2020 and was held on 12th September 2020 but, due to some technical issues during the exam it was re-conducted on 14th September 2020. Not only just technical difficulties, but it was also reported that the test paper of the re-test was leaked in between the exam.

In this article, we are going to deal with the issues faced by NLSIU while conducting NLAT and will discuss the reason(s) why NLS pulled itself out of CLAT.

As discussed earlier, the matter of NLS conducting a separate exam i.e., NLAT was presented before the Supreme Court bench led by J. Ashok Bhushan. The matter was mainly between the NLSIUs Vice Chancellor Prof R Venkata Rao and CLAT aspirant’s parents who were against the conduct of separate entrance test. The Supreme Court, after understanding the pros and cons of the exam restrained NLSIU from declaring the results of NLAT and starting admissions. Several problems were highlighted with respect to the separate exam-

The respondents argued that its been months since CLAT is getting postponed because of novel coronavirus and students might face a lot of difficulty if CLAT is not conducted this year due to ongoing pandemic situation. Also, now NLSIU is the only Law school which follows trimester system and in view of the same, it was constantly appealed to the consortium to not to delay the CLAT exam beyond September. This might cause a huge loss to the University. The Supreme Court in view of this issue allowed NLSIU to conduct the NLAT exam but it restrained it from declaring the results and starting admissions till the further proceedings. Many pleas and appeals were filed by the law aspirants of different states against NLSIU for conducting a separate entrance test.

The NLSIU in its favour stated that the concerns over the delay of CLAT were raised repeatedly before the Board and certain propositions were also proposed with respect to the same. The conduct of separate exam by all the national schools without any registration or fee was also suggested to the executive committee of the consortium but, the committee did not agree upon these suggestions. Taking into consideration the trimester system, NLSIU decided to conduct its separate exam and was left with no other option but to disassociate itself from the conduct of CLAT 2020.

Therefore, NLSIU issued guidelines for the NLAT exam which was again problematic to most of the aspirants. Many of the candidates were at disadvantage because in spite of having access to laptops or webcams, having great internet connectivity was a difficulty. During the conduct of the examination many students were unable to meet the University’s technical guidelines and thus faced trouble in giving the exam.

The Supreme Court earlier allowed the conduct of NLAT examination but had put a restraint on declaration of the results. Recently, Supreme Court 3-judge bench headed by Justice Ashok Bhushan, was of the view that NLS will not take admissions through NLAT and all the students who appeared for NLAT can also appear for CLAT and will be eligible for admissions through CLAT 2020 which will be conducted on 28th September 2020. It was also observed that all the students who appeared for NLAT had to give the exam again due to the leakage of questions and widespread malpractices. The Court while deciding upon the matter said that there are lakhs of students who want to pursue their career in law through CLAT and CLAT being a National level entrance test has always proved its usefulness and importance in the country. The aspirants around the country believe that the Consortium of NLUs will be completely fair in the assessment of the merits of the students.

The final date for the conduct of the CLAT exam is 28th September 2020. The consortium of NLUs has decided to hold CLAT 2020 keeping in mind all the necessary precautions and will all the Standard Procedures which have been laid down by the Ministry of Health and Family & HRD Ministry. The Consortium also decided to declare the results of the CLAT 2020 exam as soon as possible so that the academic session can begin promptly.