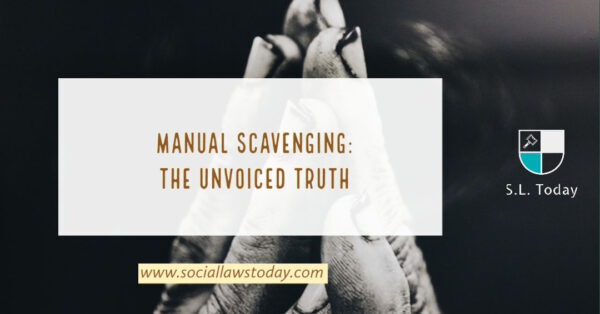 “If you are forcing someone to do a job which you hate yourself to do is similar to slavery. The worst kind of slavery is manual scavenging.”

It is the most sickening thing for some to do and it’s the only way to make a living for others. From drains, sewers to septic tanks and railway tracks, more than half a million manual scavengers across the country are cleaning, carrying and disposing of human excreta and everything else that we flush down the toilet. Manual scavengers force themselves into choked sewers and septic tanks, scooping out dirt with bare hands and bearing the stink of sewage for hours.

Manual scavenging is a term used mainly in India for “manually cleaning, carrying, disposing of, or otherwise handling, human excreta in an insanitary latrine or in an open drain or pit”. Manual scavengers usually use hand tools such as buckets, brooms and shovels. The work is being regarded as a caste-based, dehumanising practice. The workers have to move the excreta, using brooms and tin plates, into baskets, which they carry to disposal locations sometimes several kilometres away. These sanitation workers, called “manual scavengers”, rarely have any personal protective equipment.

The official definition of a manual scavenger in Indian law from 1993 is as follows: “Manual scavenger” means a person engaged or employed, at the commencement of this Act or at any time thereafter, by an individual or a local authority or an agency or a contractor, for manually cleaning, carrying, disposing of, or otherwise handling in any manner, human excreta in an insanitary latrine or in an open drain or pit into which the human excreta from the insanitary latrines is disposed of, or railway track or in such other spaces or premises, as the Central Government or a State Government may notify, before the excreta fully decomposes in such manner as may be prescribed, and the expression “manual scavenging” shall be construed accordingly.

Manual scavenging exists in India from many centuries; it is unlike any other professions that have managed to break free through the caste system if even a little. Instead, it is still firmly set in that area only which was created about 3,500 years back. Yes, thousands of years have passed since manual scavenging was introduced and it is deeply regrettable that we still have that practice in existence. As per the Hindu caste system, there were 4 Varnas, these Varna’s included the castes of Brahmin, who were priests, scholars and teachers then came the Kshatriyas, who were the warriors and the protectors, followed by Vaisya, the merchants, the administrators and the agriculturalists. Lastly were the Shudra, who would be the labourers and service providers. However the one last one, below all these Varnas, is those considered to be the ‘untouchables’, they are separate from the Varna’s and generally referred as the ‘outcastes’. The reason why this sector was segregated was because they handled the dirty waste. These people were also known as ‘bhangi’ which is a Sanskrit word for ‘broken’ and in Hindi means ‘trash’. Later on, terms like Dalit and Scheduled Castes were added to this sector and they became a face of exactly how abhorrent, heinous and cruel the caste system of India was.

To curb this inhuman act, The Government of India has passed “Prohibition of Employment of Manual Scavengers and their Rehabilitation Act, 2013”. This act prohibits the employment of manual scavengers, manual cleaning of sewers and septic tanks without protective equipment, and the construction of insanitary latrines. It also seeks to rehabilitate manual scavengers and provide for their alternative employment. According to this act, each local authority, cantonment board and railway authority is responsible for surveying insanitary latrines within its jurisdiction. They shall also construct a number of sanitary community latrines. Offences under the Act shall are cognizable and non-bailable and may be tried summarily. Articles 14, 17, 21 and 23 of the constitution of India outlawed manual scavenging practises.

This inferior institution exists even today after many centuries and laws. The 2011 Census records the presence of 740,078 households where waste and excreta is cleared out by manual scavengers. This number does not include the septic tanks, public sewers and railway tracks which are also mostly cleaned by manual scavengers. In addition, around 21 lakh households dispose of their wastes in dry latrines or drains, which also are cleaned by manual scavengers.  According to a national survey conducted in 18 States, a total of 48,345 manual scavengers have been identified till January 31, 2020. As per data collected in 2018, 29,923 people are engaged in manual scavenging in Uttar Pradesh; making it the highest in any State in India.2019 saw the highest number of manual scavenging deaths in the past five years. The number of people killed while cleaning sewers and septic tanks has increased over the last few years. 110 workers were killed while cleaning sewers and septic tanks. This is a 61% increase as compared to 2018, which saw 68 cases of such similar deaths.

Despite of living in 21st century the work of cleaning sewage and sceptic tanks is a caste based profession. Sub-castes of Dalits—Valmiki or Hela—who are at the bottom of the social hierarchy, take up this lowly job, not knowing that human faeces and urine harbour a variety of diseases like cryptosporidiosis, ascariasis, hepatitis, typhoid, cholera, schistosomiasis. This also explains why sewer workers die as young as 40, falling prey to multiple health issues: cholera, hepatitis, meningitis, typhoid and cardio-vascular problems. In fact, repeated handling of human excreta without protection leads to respiratory and skin diseases, anaemia, jaundice, trachoma and carbon monoxide poisoning. Manual scavenging is not only a caste-based but also a gender-based occupation with 90 per cent of them being women. Households with dry latrines prefer women to clean the excreta instead of men as they are located inside the house. According to a Human Rights Watch report, on an average, women get paid as little as between Rs 10 and Rs 50 every month per household. It is much less than men who earn up to Rs 300 a day for cleaning sewer lines.

The practice is driven by caste, class and income divides. “One of modern India’s great shames is the official failure to eradicate ‘manual scavenging’, the most degrading surviving practice of untouchability in the country.” – Harsh Mander.

The question which arises over here is inspite of having laws banning scavenging and the health hazards caused by it, why this practise is still prevalent? The major reason for its existence is due to governmental indifference and social prejudice. The continued presence of insanitary latrines, of which there are about 2.6 million that require cleaning by hand, according to Safai Karmachari Andolan. The belief of many communities regarding presence of a sanitary toilet inside the house as physical pollution is another reason. The act of government of not demolishing and rebuilding the old facilities lacking sanitation is the major factor contributing towards manual scavenging.

Although laws have been made to stop the practice, human scavengers are forced to enter and clean the manholes with their hands even today. In order to tackle this problem, initiatives such as Namma toilets are launched in India, it would be necessary to involve all the major skate holders like district officials, relations officer, district supply officer, chief medical officer in this drive. The same old model of pit latrine used by the community should be used to construct small pit toilets in a cost-effective manner. Creation of more employment is one of the most important rehabilitation processes. The jobs created also act as a means to assimilate manual scavengers into the community. A major reason behind manual scavenging is lack of proper technological solutions to take the place of scavengers. Advanced machines and robots can prove as a substitute to manual scavengers. The Greater Hyderabad Municipal Corporation (GHMC) has procured a manhole-cleaning robot called ‘Bandicoot’, which would help end the practice of manual scavenging. The Supreme Court has issued guidelines to all Urban Local Bodies in the country to have “technology adopted methods” for cleaning manholes and septic tanks.

But according to experts, ‘such one-time measures are not enough’. They say that a more civic-centric model should be taken, where the entire community is given more opportunities to help manual scavengers come out of this practice and lead a healthy and discrimination free life.