Acid Attack: The Battle for India. 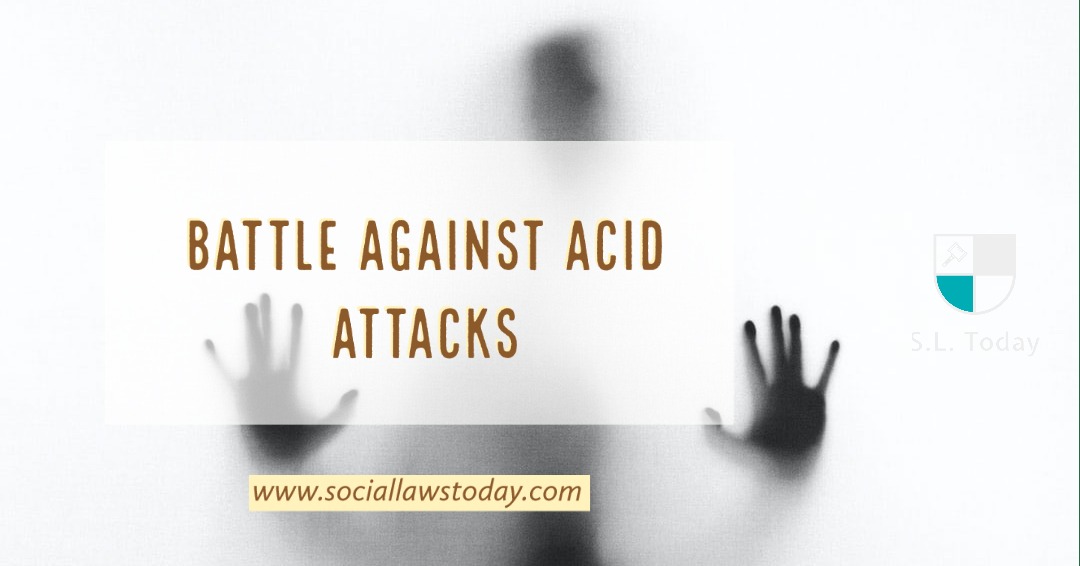 There are so many colours in our life and everyone wants to experience these colours in their life. And these colours do not discriminate against women. Women also have equal right to live their life peacefully and happily. They also have the right to dream and right to achieve all those dreams. They have already contributed very much to their family, society and their country and still doing this for the growth and development of the country but in spite of paying such devotion towards Nation Building still, they are living in fear.

If we take a close look behind the curtains, we can see clearly that they are being exploited. Each day we get to hear about horrific crimes being committed against women in our country and it’s look like a norm. Not a single day goes by when we don’t hear of the news of a crime against women. In one hand, women are given the stature of goddess and other side of the curtain, they have to bear so much discrimination.

The list of crimes against women is quite long and acid attack is one of this and worst in comparison of others, which is serious problem growing day by day in   all over the world and it requires subjective concerns- a significant number of people upset by these conditions. It is brutal instances of barbarism where strong acid is thrown at the face or body of the victim only in revenge mostly and with the intention of ruining her life.

In most of the case, it is seen that most of the victims use to be girls below the age of 18, who have rejected sexual favour or any proposal and that ego which could not accept rejection even if it would charge someone’s entire existence. Victim lives like in a hell after this. No one can even imagine the sheer amount of pain they go through. Some of the victims go blind, deaf and some unable to breathe or eat normally due to facial and internal damage. Acid burns are amongst the most horrible injuries that a human being can hardship. In addition to all this they use to shunned from the society. They even don’t like to touch their own face or look at the mirror. For them, ambition then seems like a dirty word due to lack of confidence and support. After all this society is cruel for normal skinned person then how can they leave them and what would be left if the family do not support?

All this one has to withstand only because of someone’s ego issue whose life does not change. Sometimes victims even try to commit suicide by thinking of that pain, family’s conditions and medical expenses because in some cases families not able to afford the treatment. These incidents create fear in a mind that being a woman you are not safe anywhere. Victims then just wish only one thing that they could turn back time to good old days. Psychological repercussion can even be more painful as compared to the physical consequences. It has the deep impact on both victims as well as their family members.

Acid attack is a crime that not only hurts someone for the moment, but it shatters their entire life. Most of them never fully recover from being a victim of acid attack. Every time victims, who are one of the beautiful creations made by the almighty, use to be confined themselves due to all these mis-happenings.

If we talk about the society, then there are many people who are scared to hear all this and specially women of this society. Even in today’s time, there are so many families where they believe women should stay indoors and they don’t need to study much and only male have the rights to study and work and because off all this for securing their rights to study and live freely, women have also started fighting at their houses and boycotting family traditions. Everyone has the right to fly and to live their life according to them but where such action will take place like acid attack, rape, violation, harassment, how can anyone live without fear?

And in some cases, family also do not want to support because of these incidents but they are also not wrong either at some points because they care about their pride of house which is with daughters and sisters. So, how can anyone live with freedom in this society?

Although after such a long period of getting independence, we are still showing our bad mentality. Still in true sense, women are not getting freedom. As our father of Nation, Mahatma Gandhi once said that ‘’ the day a woman can walk freely on the roads at night, that day we can say that India has achieved independence”. And today it would not be wrong to say that women can’t move freely they are afraid. If you say that this is not so and nowadays women too are free and are going everywhere and fulfilling their dreams. Yes, you are not wrong it’s true to some extent but tell me one thing if the fetter are tied in your feet and then allows you to move as much as you want to but with tied fetter so will you be able to move freely or happily. The same happens to them with the fear they move then how did women get freedom.

In India, there was no separate legislation to deal with acid attacks before the passing of the criminal law amendment act, 2013. With the amendment in the Indian Penal Code on Feb 2013 this incident of acid attack is now being recorded as a separate offence under section 326A and 326B. As per the report, the worse affected states include New Delhi, West Bengal and Uttar Pradesh where the acid attack is increasing year by year.

The Supreme Court in 2013 directed that the acid attacks victims shall be paid a compensation of at least Rs. 3lakhs by the concerned state government. As in case of Renu Sharma, the Delhi High court directed Delhi government to provide free medical treatment to victim.

The best thing is that, now a day’s victims have also stepped up for themselves and have started supporting each other with confidence and some NGOs are also helping them in this.  Now no one can keep them in a cage by dipping their wings and telling lies that fragile bird were never meant to fly because their wings can finally grow and they will definitely find their sky.

At last, I just want to say to victims that Sky has no limit, there are so many colours still left in their life, so stand strong again for yourself, enlighten the internal strength and start to fly with their strong mental power. Although, it is easy to put suggestions, only victim knows about her hardship from the situations she suffers, but only their strong will power, mental strongness, firm determination can return finest reply to acid attackers and it will also show proper path to other victims. It is duty of NGOs, our sensible society and its member, either male or female, students or professionals, farmers or soldiers, to oppose this act of barbarism, make socially by-cot to the acid attackers and must do full support to the victims to catch their dreams.  Only positive approach towards victims can uplift their  physical and mental conditions and will certainly demoralize the offenders and one day such incidents will come to an end. Let us hope so.

Also Read: THE SOCIETAL ASPECTS AND CRIMES AGAINST WOMEN