HATE SPEECH: SOCIETY SHOULD NOT BE A MUTE SPECTATOR 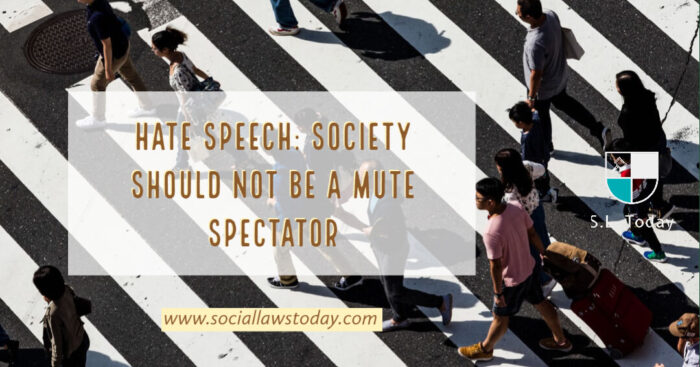 Free speech is one of the essential features of democracy. A nation that allows its citizen the Right to Freedom of Speech and Expressions’ can be regarded as a progressive nation in true sense. Speech plays a crucial role in dissemination of ideas and beliefs.

The existence of various opinions in a plural society indicates growth and peaceful coexistence and a society which encourages difference of opinion is definitely capable of building a very strong nation. However, speeches with ill motive, defying the decorum of a civilized society have off late played havoc not only with the social fabric but also with unity and integrity of the nation. Hence, while it is important that a nation allows its citizens Freedom of Speech, it is equally important that such a right is not infringing on other citizen’s right to opinion including religious belief. To that extent, a society shouldn’t stand speechless, as a mute spectator.

This article seeks to study recent developments where hate speech has trampled on citizen’s rights. It analyses what constitutes hate speech and the mechanism developed by India, in controlling hate speech without jeopardizing the Right to Freedom of Speech and Expressions ingrained in the Constitution.

“The right to swing my fist ends where the other man’s nose begins.” – Oliver Wendell Holmes.

The freedom of speech and expression has an important position in the hierarchy of liberty. Hence, it can be truly said that it is the mother of all other liberties. Free speech is essential for the full enjoyment of personal autonomy. Freedom of speech and expression is basically the right to express one’s own opinions freely by any mode. It is widely regarded as the essence of free society and it must be safeguarded.  Right to Freedom of Speech and Expressions must be exercised with due diligence so that it does not hurt other citizens. According to Michel Rosenfeld ‘hate speech’ is a form of ‘speech promoting hatred on the basis of race, religion, ethnicity or national origin’.[1]

The Right to Freedom of speech and expressionhas been guaranteed under Article 19 of the Constitution of India.[2] However, this is not an absolute right and has been subjected to certain restrictions to control its misuse.

If we see in international context, for the speeches related to any race, the International Convention on Elimination of all forms of Racial Discrimination speaks for a ban on expressing of ideas of superiority or inferiority on the basis of “race” categorization.

In Indian context, hate speech has primarily been understood as referring to speech intended to promote hatred or violence between India’s religious communities. Acknowledging India’s cultural diversity, the Indian Constitution has ensured a culture of tolerance by putting some checks on freedom of speech. Clause 1(a) of Article 19 of the Constitution states that the state can put “reasonable restrictions” on the exercise of this particular right.

India prohibits any form of hate speech through several sections of the Indian Penal Code and the Code of Criminal Procedure.

THE CODE OF CRIMINAL PROCEDURE, 1973

Section 95 of the Code of Criminal Procedure,gives government the right to declare certain publications “forfeited” and to issue search warrants for the same.[3]

Various sections of IPC deal with hate speech. According to Sections 153A and 153B, any act of any person that promotes enmity between classes or groups on the grounds of religion and race and is prejudicial tointegration of the nation is punishable. Section 295A of IPC states that speech, writings or signs made with deliberate intention to insult a religion or religious beliefs is punishable and could lead to up to three years of imprisonment.[4]

Protection of Civil Rights Act, 1955, enacted with an aim to abolish untouchability from the country talks about provisions related to penalty for promoting and giving hate speech against Dalits.

Section 125 of the Representation of the People Act, 1951 bars or stops political parties and any candidates standing in the elections from creating or spreading enmity or hatred between different classes of citizens of the country.

Over the past few years there have beeninstances where cases have been filed in the Courts in regard to hate speech. Even the Indian judiciary has often come up with judgments on certain occasions to fight the danger posed by hate speech.

In the 1990s, plethora of cases were filed against Maqbool Husain for hurting the religious sentiments of Indians through his paintings of Bharat Mata as anude woman. “Dwikhandita”is a book written by Taslima Nasreen and this bookalso faced so much of criticism because it was alleged to have outraged the religious feelings of the Islamic community.

In November 2012, Maharashtra Police went on to arrest ShaheenDhada for criticizing the shutdown of the city for Bal Thackeray’s funeral in his Facebook post. Even her friend Renu Srinivasan was arrested for liking her post. The girls were charged under Section 505 (2) of the Indian Penal Code, which talks aboutstatements which promote enmity, hatred or ill-will between different classes.

In December 2015, Azam Khan a Minister of Uttar Pradesh government, made a statement that RSS workers are homo-sexual. In response, one Kamlesh Tiwari made an objectionable statement against Prophet Mohammed. Kamlesh Tiwari was arrested and bail to him was denied.

In July 2016, Congress MP in Rajya Sabha,Shantaram Naik stated that Zakir Naik must be booked under certain provisions of Indian Penal Code (IPC) for hate speech and spreading communal ill-will.

As the Indian democracy becomes more vigorous, there have been an increase in speeches whichleads to controversies, contestations and conflicts, but such speeches must never cross the borderline of decorum which becomes the primary and humble duty of every citizen. It is very important to enjoy the freedom of speech and expression but it should be exercised with caution and care that it is not hurting the sentiments of others and if the citizens forget this duty of theirs, it becomes the duty of the State to intervene in such matters. In order to maintain the integrity of constitutional system and even harmony in the society, it is the ordained duty of the Government to protect both- equality as well as the freedom of speech and expression as much as to not remain speechless against hate speech.