God, Nature & The Law vs. Humanity 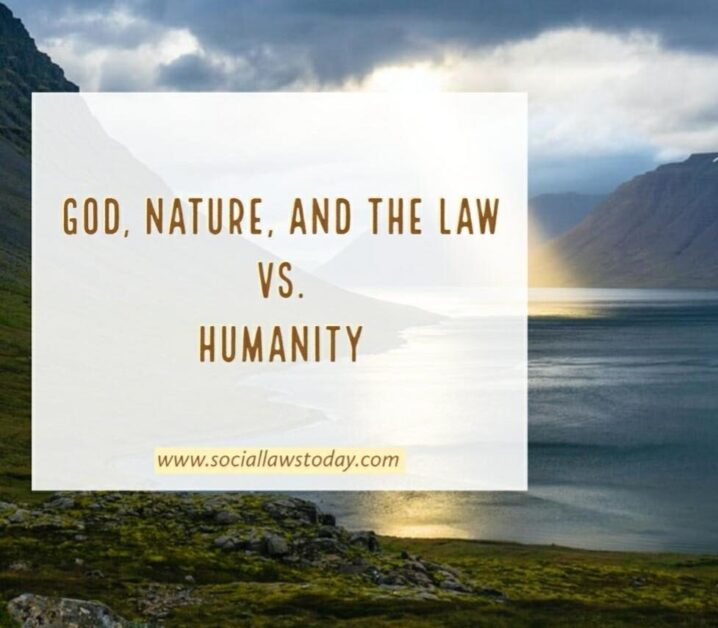 Earlier haldi, kumkum, neem, and sandal powder were used in celebrating Holi. But now colours which are made up of harmful chemicals are used.

Earlier the preservation of nature was considered to be one of the main religious duty but at present people are causing destruction to the nature in the name of God.  We should always keep in mind that nature can survive on its own but we cannot survive without nature. Even though the legislature and judiciary tried to preserve nature but it was fortunately or unfortunately a failure. However, during this pandemic, humans learned how to do their religious practices without causing much disturbance to nature.

In the ancient period the people have started to consider the whole universe and its creatures belong to the god and its preservation is an integral part of their religious duty.

In Vedas, Upanishads, Manusmriti, Arthashastra, they have mentioned preservation of nature and enlisted various punishments for the destruction of the same.  In Ishopanishad it is mentioned that if a man utilizes natural resources more than his need then he is considered as a thief.

Muslims believed that a man has certain religious duties to  God because they inherited all resources of life and nature from him and uses them daily. Christians believed that God gave the earth to his people and their offspring as an everlasting possession, to be cared for and passed on to each generation.

Role of Judiciary and preservation of nature

Since time immemorial the people started to worship and preserve nature by these sacred living temples. It helps in maintaining the nutrients cycle, soil fertility, and stability to the ecosystem. But at present, the sacred groves have started to disappear.

When the ashes are dumped into the water bodies, it leads to water pollution. When the bodies are buried underground, it produces dioxin and furan emissions which causes soil pollution and sometimes formaldehyde fluid enters into the groundwater and makes it unusable.  The Advocates of Green Space in London converted almost 100 graveyards into public gardens or playgrounds to balance nature.

In Janhit Manch v. State of Maharashtra one of the reliefs claimed by the petitioner is to ban the immersion of bones/ dead bodies/ ashes in the water streams. The high court of Bombay directed the central and state government to make guidelines regarding it.

If we hear continuously the sounds of the afore instruments used during religious practices over above 90 decibels then there is a chance for loss of hearing. If a person hears noise for more than 150 dB for one time, then he may get a permanent injury.

In the Church of God in India v. K.K.R Majestic Colony Welfare Association and others the Supreme Court observed that the performance of prayers through amplifies and beating of drums is not prescribed by any religion. The limits have to be within those prescribed under environmental laws.

In Moulana Mufti Syed Md. Noorur Rehman Barkati and Ors. v. State of West Bengal the Calcutta High Court observed that the imposition of restrictions on the use of microphones and loudspeakers at the time of Azan is not violative of right under Art.25. Citizens have the right to be protected against excessive sound under Art.19 (1) (a).

In Mahesh Vijay Bedekar and Ors. v. State of Maharashtra and others, The Bombay High court held that the use of loudspeakers is not an essential part of any religion and therefore the protection under Art.25 of the constitution is not available.

A lot of oil, soap, detergents get immersed in the water during mass bathing at the time of festivals and it will lead to a high degree of organic pollution.

In Janhit Manch’s case one of the reliefs claimed by the petitioner is to ban the mass or community bathing during Kumbha Mela. The Bombay high court directed the central and state government to implement guidelines regarding it.

These are made up of toxic compounds and usage of these causes air and noise pollution. It causes wheezing, respiratory diseases, etc. and also affects the reproductive system.  Moreover, the waste materials which is left on the roads causes soil pollution.

In Re: Noise pollution, the Supreme Court restricted firecrackers in the Diwali festival and said no religious textbooks said that firecrackers are compulsory. So, it will not be violative of Art.25 and it can be restricted under Art. 19(2).

In Forum, prevention of environment and sound pollution v. Union of India, the supreme court mentioned that there should be a complete ban on the use of sound-emitting fireworks between 10 P.M. and 6.AM. without any relaxation during festivals.

In re 2016 case, The Kerala High court held that during festivals like Thrissur pooram people can gather together in a fixed place and time and can burst the fireworks there in accordance with the explosive rules. The manufactures can be encouraged to make such fireworks as would displace more colours rather than sound.

In Arjun Gopal and Ors. Union of India and Ors, The Supreme Court of India observed that the fireworks emit various harmful elements like Copper, Magnesium and Potassium, etc. which causes air and noise pollution. The court directed to suspend all such licenses and permits in the sale of fireworks, within the territory of the national capital.

Earlier people used clay, turmeric, milk, curd, ghee, coconut, etc for the idols. But now, very large idols made up of PoP, plastic, cement, paper, lead, metals and other harmful chemicals are used. Some substances will not dissolve in the water and causes reduction in the oxygen level, some sucks oxygen and generate methane gas, some forms a layer blocking the sunlight from entering the water, some make the water alkaline and when the calcium and magnesium concentration increases, it will cause hardness of the water.

In Janhit Manch’s case The Bombay high court directed the government to make appropriate rules and the central pollution control board has issued certain guidelines for immersion of idols in 2010. They have stated that the idols to be made of natural materials and paint.

In Daxin Gujarat Murtikar Sangathan v. State of Gujarat and Ors, The High Court of Gujarat held that there is no total ban or prohibition and all that is done is made some regulations for immersion which is not violative of Art. 14, 19 and 21.

Earlier haldi, kumkum, neem, and sandal powder were used in celebrating Holi. But now colours which are made up of harmful chemicals are used. When we discharge these toxic colours it affects soil fertility, groundwater, microorganisms, plants, and also causes skin cancer, allergies, renal failure, carcinogenic, etc.

Some other practices such as putting Pandas/temporary booths in the streets, poor waste management in disposing puja materials, Slaughtering animals and poor disposal of carcasses, over usage of the electricity, etc. are some of the other practices which affect the nature.

The inadequacy of laws on these socio-cultural practices has an adverse impact on nature. Nobody is ready to make an exhaustive law regarding these practices due to fear of affecting the religious sentiments of society.

Due to the pandemic, a lot of religious institutions has conducted their festivals in a simple manner and a lot of people started to conduct religious ceremonies in their own home. Each one can continue with their religious practices but it should be done without causing any destruction to nature.