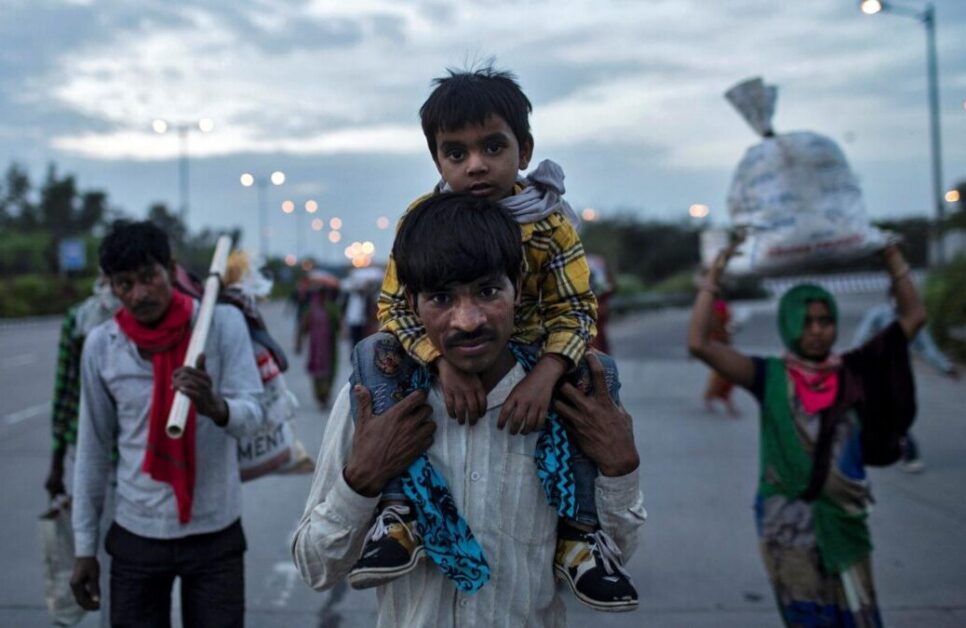 The global Pandemic, COVID-19, has inflicted heavy damage on the countries around the world from various fronts, and India is no exception. Since the beginning of March, India has been under a blanket lockdown with only essential services open for the public. It’s one of those few pandemics that the world has witnessed so far which not only brought the pace of life to a standstill but also posed an existential threat to the survival of human beings. Today human beings are afraid of each other due to the fear of contraction of the virus. The majority of the people are anxious, angry, and scared. While some are left with the choice to die either out of starvation or due to the virus.

The liberal school of thought has always emphasized adamantly about the role of “free will” in determining human actions and behaviors, which according to them should be allowed to function independently. However, the pandemic like the coronavirus has taught mankind that the ‘free will’ is some sort of myth in such an extremely interdependent world, where everything from our social standing in terms of our gender and economic status to the composition and the nature of the society we live in play an important role, overpowering the free will of the individuals, in shaping our destiny. There is always someone or something that plays a very decisive role in shaping our destiny There is no doubt that extraordinary situations like this require extraordinary measures to overcome the problem. How the countries around the world with different political systems are dealing with the pandemic is also testing the leadership and efficacy of the existing form of governments in these countries. This disease has revealed some of the downsides of democracy as well. The argument that the people in a democracy are considered to be supreme, hence there should not be restrictions over their freedom can’t be justified in the moment of crisis like this. The state is compelled to suspend the rights of the people in the collective interest of the citizens of the country. This is significant to note especially if the people were left free to act as per their own will, then the situation would have gone out of control.

Indian government along with the state governments of the country have been undoubtedly trying their level best to contain the spread of the virus. It has taken some outstanding measures at the administrative and executive-level which other states have failed to take on time. States such as America, Brazil, and Italy are chuffed by the help provided by India. However, it doesn’t mean that everything is alright. Many questions about the survival of the poor due to the lockdown, low number of people being tested per million, the availability of proper medical infrastructure and the way the government has dealt with the crisis so far pose some serious challenges which can’t be brushed under the carpet. But in this piece, I would like to draw your attention to some of the fundamental lacunae in the existing acts that the Indian government has invoked to fight against this pandemic and how these may have a serious implication for the democracy of the country in the long run, if these are not addressed on time.

India being a densely populated country and having healthcare under the state list, the notion of invoking the Disaster Management Act, 2005 against coronavirus outbreak was an imperative step taken by the Indian government as this act hereafter brings healthcare under the union’s preview. Largely healthcare is under state list according to the constitution and without invoking the Disaster Management Act, states had to alone deal with this pandemic. But after declaring it a disaster now the union can directly and collectively deal with it without restraining the power of state governments. Under Sections 6 and 10 of the Disaster Management Act, 2005, PM Modi, who is also the chairperson of the authority, declared Covid-19 as a national disaster and through this entire country placed under lockdown regulations, which are easier to implement.

There is a wave of ambiguity amongst the general public regarding the enforcement of nationwide lockdown and how it has been effected. Some people still are curious to know as to which provision of which acts confer the arbitrary power to take away the rights of the citizens in a single stroke. The answer is that the lockdown has been implemented using two pieces of legislation – The Epidemic Diseases Act, 1897 and The Disaster Management Act, 2005. Section 2 of the Epidemics Act empowers the state government to “prescribe such temporary regulations to be observed by the public to prevent the outbreak of such disease or the spread thereof”.

At the very outset, various state governments had issued lockdown orders using the powers conferred by the Epidemics Act but eventually, Central government realized that Epidemic Act has a certain limitation of jurisdiction within states and union of India was in need to invoke a unified law to contain COVID-19 effectively in a single go. To achieve that later on, the Prime Minister declared the lockdown on March 24, the declaration by PM Modi was backed up by a notification issued under the Disaster Act. However the notification by itself, interestingly, does not explicitly restrict any movement of persons and is open only about the closure of shops, business and industrial establishments, schools etc.

Under the Disaster Management Act once a notification is issued by the PM, then comes the responsibility of the National Executive committee constituted under the Disaster Act under Section 10 (2)(l). The provision empowers the National Executive Committee to “lay down guidelines for, or give directions to, the concerned Ministries or Departments of the Government of India, the State Governments and the State Authorities regarding measures to be taken by them in response to any threatening disaster situation or disaster”.

Now it is pertinent to note that this provision does not appear to empower the National Executive to issue directions to individuals and private businesses to shut completely. The directions can only be issued to state and Central governmental departments.Thus, there appear to be some legal lacunas in the above two scenarios. First is related to the notification given by Modi as a chairperson of National Disaster Management Authority which was silent about the restriction to the free movement of persons and second is concerning the orders passed by the National Executive Authority directing closure of non-essential services. There is grave doubt whether the Disaster Act confers the power on authorities to issue the kind of orders that have been issued.

There are said to have many constitutional issues with the lockdown. Its effect on the rights of people to work to earn their daily wages is being deemed as a violation of Article 21 and shutting of all businesses, without showing that this was the last method that could be used for stopping the spread of the Coronavirus, is being seen as a violation of Article 19(1)(g). Restrictions on people moving between States would possibly be contrary to Article 19(1)(d).

However one can argue that the measures are justified in the face of the increasing healthcare emergency. Each of these Constitutional issues would require greater examination by the Courts. Which is, unfortunately, may not receive as to contain this pandemic no one actually wants to dig into the legality or illegality of lockdown.

In fact, the guidelines issued for not letting daily wage workers fleeing to their villages and directing employers to make payments to the workers for the period of the lockdown are questionable. Also the directions were made that landlords will not seek rent for one month. To my mind, there is no legal basis to force someone to do charity like employers and landlords were asked to do. On a very purposive and legal reading of the Act one would know that the primary role to solve the problem is largely upon the government and not on individuals because citizens are themselves victims of the disaster.

Even when an emergency is declared under Article 352 of the Constitution, there is always parliamentary supervision. Article 352 (2) requires any proclamation of Emergency to be approved by both Houses of Parliament within one month from its issuance.

In the case of the guidelines and orders issued under the Disaster Management Act, there is virtually no control or supervision by any authority. It is the imposition of an Emergency without complying with the process provided for in the Constitution. There is also limited legal recourse since under Section 71 of the Disaster Act, the jurisdiction of courts inferior to the High Courts is barred.

The lockdown may in fact be necessary to protect public health. However, the framework currently in existence does not appear to be sufficient to give a sound legal basis for the issuance of the orders that have been passed.

What is extremely concerning is that The Disaster Management Act, 2005 under some section such as section 62, 64, 71, 73 74, 75, 76, 79, give unimaginable emergency power to the government and surprisingly the definition as to what is a disaster itself is very wide and can be interpreted ambiguously. Not criticizing the current measures of the government but if the center wants to misuse the Disaster Management Act, 2005 they can do it quite easily in the future. Any catastrophic mishap, even manmade can be regarded as a disaster. It can seize the rights of the people for anything.
Disaster Management Act is no doubt a great piece of legislation but it gives the unbridled powers to the central government with very ambiguous provisions that can be interpreted and implemented by the government to even suspend the rights of the people even when it may not be required. Therefore, once the crisis dies down, either this act should be amended or new legislation should be brought replacing this existing one to ensure that arbitrary misuse of the law can be prevented in the future.

Lord Atkin once said, “Amidst the clash of arms, the laws are not silent. They may be changed, but they speak the same language in war as in peace”.
What makes a parliamentary form of democracy better than any dictatorship or communist regime is the safeguard of the certain basic constitutional rights of the people which can’t be taken away at any cost. A democratic regime should always believe that the laws are superior and lawlessness means total chaos.

Today, we are facing a grave threat in the form of Covid-19, but tackling it democratically and lawfully is also fundamentally important. India will rise and recover from this pandemic sooner or later, but during the times of adversity, everyone must keep faith in the democratic approach of problem solution so that it can’t be used as an excuse by the leaders in future to portray that democratic system is inefficient in dealing with the problems, hence it needs to be done away with. If amid adversity we start acting in such a way that gives the impression that a dictatorial way of resolving a problem is better than democratic one then it may post a question to the efficacy of democracy. The dictatorial ways should not be allowed to prevail over democratic means.

Therefore in normal times when circumstances are not odd, all such lacunae in the acts must be looked into with seriousness.

A LESSON TO LEARN FOR COVID-19 - Social Laws Today