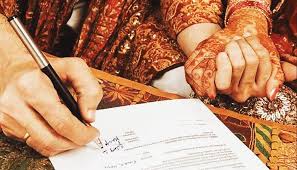 Marriage is a legally recognised social contract between two people. Marriage is considered to be a sacred institution in India. Marriages in India are festive occasions and in most cases celebrated with extensive decorations, music, dance, costumes and rituals.

In today’s fast-moving world some people prefer Love marriages in Court in India, due to lack of time. Court marriage in India means legal authorization of marriage between two people belonging to two different religions or to the same religion, according to the Special Marriage Act 1954. So, Court marriage means getting married in court which makes the marriage legal.

The interested parties can apply directly to the marriage registrar in order to perform marriage and register marriage and to get a marriage certificate.

Conditions for Court Marriage in India:

There are certain conditions which are to be fulfilled before entering into such a marriage which are mentioned in Chapter II, Section 4 of The Special Marriage Act 1954. They are:

Given below are certain documents which are required for court marriage.

In case if the marriage is solemnized between an Indian and Foreign National, then the applicant has to submit the following documents in addition to the above-given documents.

According to section 5 of the special marriage act, a notice has to be issued related to the marriage regarding the provisions. Written notice should be sent to the marriage officer showing the interest of both the parties getting married to each other.

The notice should be sent to the respective office of marriage officer according to the jurisdiction where any of the party to the marriage is residing for a minimum of 30 days before the sending of the notice.

If the notice sent by the parties doesn’t match the jurisdiction, then the same will be forwarded to the office of the correct jurisdiction where the parties have been residing.

The process of Court Marriage’s Cost also varies from State to State and one has to individually look into the fees of the respective place where the marriage is been solemnized.

For example, in Delhi, around 150 rupees is charged if the wedding as per the Special Marriage Act

Work of a Lawyer in a Court marriage:

The role of the lawyer in a marriage, in court, of his clients is as follows:

This Act applies to inter-religion as well as inter-caste marriages. Also, with the help of this Act, a marriage can take place between the Indian National in foreign countries.

Any chance of falseness in the consent or behaviour can be easily caught out in the case of court marriage.  Once a couple is married under this Act the marriage is governed not only by the couple’s personal religious laws but also by the laws mentioned in the Special Marriage Act 1954.

[…] Also Read: How to Perform Love Marriage in Court in India […]

[…] Also Read: How to Perform Love Marriage in Court in India […]