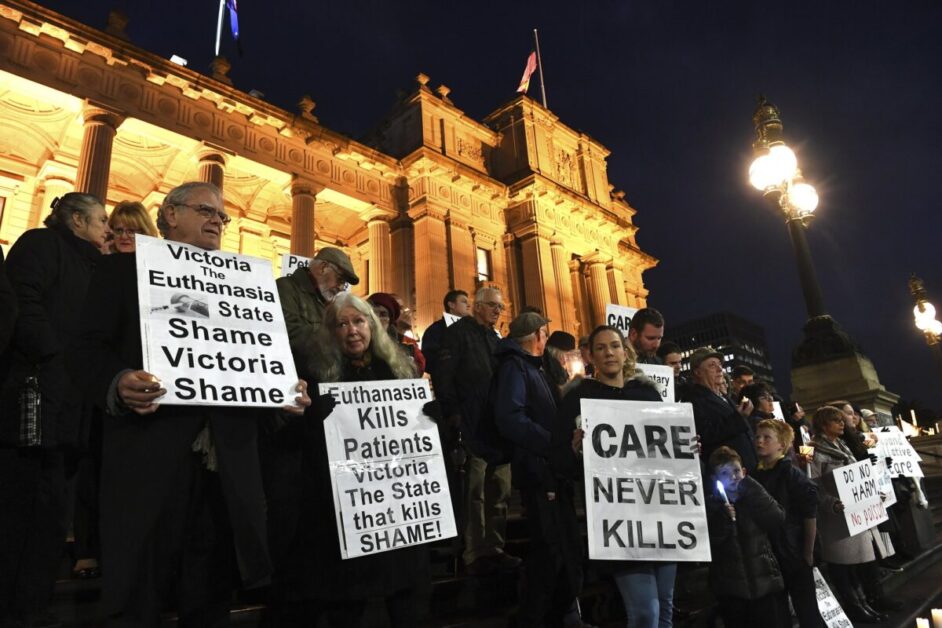 Assisted Suicide And Euthanasia have been a topic of debate all over the world. Legalizing them has been demanded to bring the end to the sorrowful and painful life of the deceased. Being a delicate topic of discussion whenever amended will have its supporters as well as haters.

Suicide can be considered as self-conviction because the very thought of suicide comes when a person has guilt of either omission to do an act or commission of an act. Assisted suicide will only mean taking aid of someone which is an offence of abetment to suicide. This is the reason assisted suicide is illegal in most countries. The point of debate for assisted suicide arise on that point that if right to live is a fundamental right then why not right to die?

Euthanasia is different from assisted suicide because in euthanasia there is mere or no scope of the person’s condition getting any better. Here, death becomes less painful than survival.

Our Constitution also lays focus on this controversy through its Article 21. There legality under the Indian laws lie in the Indian Penal Code.

Our Constitution through its prestigious Article 21 stretches by safeguarding Right to Life with self-esteem to all its citizens. But the query lies whether Right to Life prevails in conditions where the quality of life is very underprivileged? The authors through this article would like to attract the attention of the readers on the subject of debate: Euthanasia and Assisted Suicide.

The premeditated killing of a person to relieve him from all the agony and sufferings is recognized as euthanasia. It is basically a blend of two Greek words: eu which means “Good” and thanasia means “death”.In layman footings, it basically states “ending the life of the deceased person on his demand”. The term euthanasia is also known as mercy killing. Further, assisted suicide was been practised in the ancient time in

Greece and Rome but become a point of controversy majorly because of the Hippocratic Oath and faith of Christian that life is a gift by God.

The authors through this paper would like to induce the attention of the readers on the assisted suicide: Physician-Assisted Suicide, Kith and Kin Assisted Suicide and Euthanasia and its types debated with the recent judgements.

This sort of assisted suicide is the utmost common form of assisted suicide. In such suicide the physician assists the deceased to bring an end to his life, basically to bring an end to the painful and sorrowful life of the deceased. As “Right to Life” with dignity with provided as a Fundamental Right to every citizen, “Right to Die” when found apt by the individual should not be deprived of.

Assisted suicide being lawful in countries like Belgium, Canada, Switzerland, Luxemburg, Germany and six states of the U.S. only if the lethal act is committed by the deceased himself. A brief history of the legality of assisted suicide in some countries is as follows:

Till 2014, California did not recognize the idea of Physician-Assisted Suicide, so 29-year women who resided in California and was diagnosed with painful brain cancer chose the path of “Right to Die”. As her sickness had no cure, she moved to Oregon, one of the five states which had legalized the concept of physician-assisted suicide.

Australia was the first country to pass legislation the “Right of the Terminally Ill Act” which gave assisted suicide legality in 1995. But this legislation was scrapped by the Australian Federal Government in 1997.

It was around 2000 that Physician-Assisted Suicide gained attention in France. It aided in having new legislation for the people who were barely suffering on an artificial support system. This legislation assisted them to put an end to their life.

This issue basically gained attention when a car crash of a man who was unable to walk, see, smell or taste after his accident. He demanded the Right to Die but his appeal was rejected. Seeing his pain and suffering his mother injected him an overdose of medicine which finally brought an end to his painful life. Though his mother was firstly arrested but later acquitted.

Physician-assisted suicide is permitted in Colombia. It is criticized by many Colombians. But this legality had helped many people in Colombia who wanted to put an end to their life’s. One major drawback is that it paves no way to set documents, rules or regulations for the doctors and patients who want to end their life’s.

Being a democratic country and having various cultural diversities, Right to Die has been interpreted differently founded on cultural beliefs.

Though our Constitution also prevail-edges each citizen through Article 21 Right to Life, its interpretation has been a debatable point that whether it also gives Right to Die or not? The code in India which deals with this notion is the Indian Penal Code. In other words, its legality lies in the Indian Penal Code.

Physician-Assisted Suicide is a delicate topic of debate will always have its supporters and haters when amended, it sprawls on the law-makers whether to legalize it or not.

This is a form of assisted suicide which is found in very few instances. This form is illegal in almost every country. Family assisted suicide generally means suicide with the aid of a family member. For instance, a family member aiding a person to flee to a country where suicide is not illegal. This is per se illegal because there are vivid chances of it being misused. The Apex Court of India while dealing with passive euthanasia in the case of Aruna Ramachandra Shanbaug v. Union of India has, therefore, decided not to grant a right to decide to the family members of the patient on his behalf. The deciding factor till the time law in this regard comes into force is with-held with the Courts which shall be exercised on the recommendation of the medical committee only.

There are numerous reasons for not giving any right of decision to the family of the patient, like There might be some financial and other constraints on the family, therefore, they want to end patient’s life, however, the patient might not want so or the doctors might have the opinion that the patient will recover; family member might have malicious intent behind the death of a patient, etc. Moreover, the assistance of any sort from family or any person, in committing suicide is a punishable offence under section 306 of IPC and the person who fails in attempting suicide shall also be punished under section 309 of IPC.

Euthanasia in the form of passive euthanasia has been recently made illegal in India. Euthanasia has, for a long while, been a topic for debate in India. It was like a ship in an uncharted sea’ as apart from the ‘sea’ which can be understood as ‘the law of the land’, the waves of moral and ethical values were also to be considered. Either way, they went, some of the other fundamental principles of law was violated. The Delhi High Court went ahead and observed that the punishment for suicide is absurd in the era of euthanasia. The Bombay High Court had held, ‘right not to live’ or ‘the right to end one’s life’ is an integral part of the constitutional right to live, however, this was subsequently overruled.

Later, in the case of Gian Singh v. the State of Punjab, the Apex Court opined that the fundamental right to life did not cover the ‘right to die’ but definitely covered the ‘right to die with dignity’. The same was taken up by the Court in the leading case of Aruna Ramachandra Shanbaug v. Union of India wherein the Apex Court for the first time made passive euthanasia legal under certain circumstances, while not changing its stand from suicide being illegal. The Court also distinguished between the forms of euthanasia: voluntary and non-voluntary euthanasia, active and passive euthanasia. Voluntary euthanasia means when the patient is in a condition to give consent whereas non-voluntary euthanasia means the condition of the patient is such that he/she cannot give consent, therefore, the decision falls on kith and kin of patient. ‘Active Euthanasia’ entails the use of lethal substances to terminate a person’s life whereas ‘Passive Euthanasia’ denotes withdrawal of life-saving medical treatment.

In a simple sense, the former involves ‘commission of an act’ whereas later involves ‘omission to do an act’. The rationale of the Court behind legalizing the passive euthanasia is because failing to save a person does not constitute a crime however, a deliberative act would tantamount to murder. Further, the very fine line of difference between assisted suicide and euthanasia is that informer, the physician/doctor prescribes the patient the lethal substance and the patient on his own consumes the substance meaning thereby, the patient is not in a permanent vegetative condition.

Therefore, assisted suicide will be considered equal to murder or abetment to suicide. The Hon’ble Court in this case has recommended certain procedures to be tailed till the time legislation drafts a law in this regard. The Hon’ble Court has laid down that an application for euthanasia shall be filed before High Court and at least a division bench should decide whether or not to grant approval or not. A medical committee comprising to at least three reputed doctors shall be set to look into the patient’s state of being. The Court should base its permission on the opinion of the medical committee. Further, the decision of the Court shall be followed by specific reasons for arising at such a decision.

Assisted suicide is still not acceptable in India because the doctor actively participates in the suicide by necessary information or substances for the successful commission of suicide further, the doctor who assists in suicide will be prosecuted homicide. It is considered immoral from the point of view of religion as well as law.

In the present scenario in India, notwithstanding the fact that certain requirements to be fulfilled, only passive euthanasia whether voluntary or involuntary is legal. Further, the concept of living wills is also dealt under passive euthanasia.

As said by Lord Denning: ‘(t)hus far has the law developed up to date. Now there are further developments looming ahead’. Therefore, it can be concluded that there is need to sightsee this field of law also to advantage the ill patients and give them a painless ending of life. There is a very fine line of difference of natural and unnatural death, between assisted suicide and euthanasia.

“Death is not the opposite of life but a part of it.”said by Haruki Murakami.