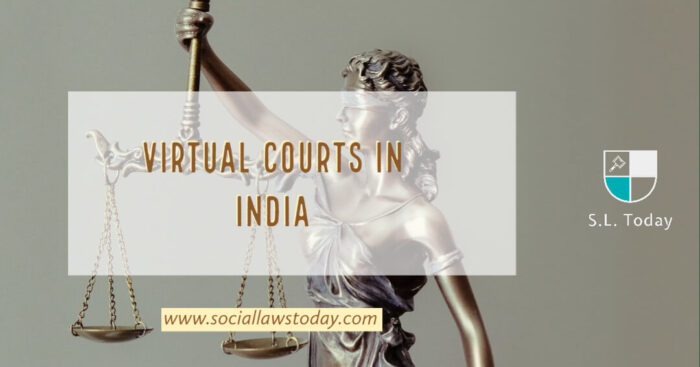 What are virtual courts?

Though virtual courts are the very convenient option in the metropolitan cities but are they legal?  As the covid-19 is at its peak and there is a huge extension on the number of corona cases and increases in the work from home culture. As the result Supreme Court issued directions for all the lower courts across the country to extensively use video conferencing for judicial proceedings. This will not only reduce the costs but will also lead to speedy disposal of cases. On 4th of July, 2020 the supreme court through India legal bureau stated “In order to contain the spread of Corona virus (COVID-19), considering the prevailing situation, and taking into account the suggestions received from various quarters and the guidelines issued by the Government of India and Government of NCT of Delhi from time to time, Hon’ble the Chief Justice of India has been pleased to direct the constitution of the Hon’ble Bench(es) for hearing of matters through Virtual Courts  w.e.f. 06.07.2020.”

The supreme court exercised its plenary power under Article142 to direct all high courts to frame a mechanism for the use of technology during the pandemic. District Courts in every state shall adopt VC technologies prescribed by the appropriate High Court. Courts shall make VC facilities available for those litigants who do not have access to these facilities, including by appointment of advocates as “amicus curiae” and making VC facilities available to such advocates (if necessary). Till such time as the High Courts frame rules in this regard, VC technologies shall primarily be used for hearing arguments, both, at the trial as well as appellate stages. However, evidence shall not be recorded using VC facilities except with the parties’ mutual consent.

The directions shall remain in force till such time as further orders are passed by the Supreme Court. On 7 April 2020, the High Court of Telangana passed directions for conduct of hearings via video-conferencing in the state during the period of COVID-19 lockdown2. It is expected that other High Courts as well as tribunals will adopt similar measures in the coming days. Separately, on 8 April 2020, the Bombay High Court issued special directions in connection with live-streaming of matters listed for hearing on 9 April 2020 before His Lordship the Hon’ble Mr Justice G S Patel3.

Previously, the Kerala High Court had live-streamed its hearings for the general public via Zoom App. The Supreme Court is also moving towards technological advancement for its functioning and is conducting hearings through video conferencing since March25, to maintain social distancing. The Supreme Court held its first Constitution bench sitting through videoconferencing on 14 July, 2020. A bench of justices Arun Mishra, Indira Banerjee, Vineet Saran, MR Shah and Aniruddha Bose appeared wearing masks and maintaining nearly two-feet distance between them on the bench. The first case that was heard by the five-judge bench was a legal tussle on whether Centre or states have the power to provide reservation to in-service candidates in post-graduate medical degree courses. The plea was brought up by Tamil Nadu Medical Officers Association.

While there are clear safety and time-saving advantages offered by ODR(online dispute resolution), there are several risks and challenges to be considered:

In virtual court proceedings the internet would play a vital role. It requires an extensive accessibility to internet and a good internet speed does matter a lot. The metropolitan cities like Bangalore, Mumbai and Delhi, which have continuous access to internet, might have persons who would be able to avail of virtual court services; there is vast majority of citizens who would continue to suffer due to lack of basic infrastructure.  Only 34.45% people In India has accessibility to internet which remains 65% of non internet users. To participate in online proceedings, required minimum speed is 2mbps/sec & this speed is available only with 4G. Since a country like India majority of population lives in rural areas & is still underprivileged, as far as accessibility of internet is concerned virtual court would be a bold attempt.