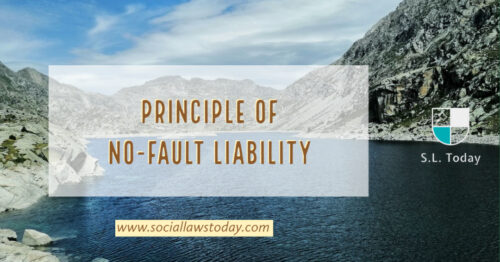 The tort is a civil wrong where the remedy available is only compensation, various principles are governing the Law of Torts one of them is the Principle of No-fault Liability. Generally, a person is punished for the wrongs committed by him but this principle makes a person liable even if he’s not at fault, here the person has to pay the compensation to the victim also when he has not done anything.

If a person keeps something dangerous or hazardous(it could be Gas, electricity, explosives, pillar, poles, poisonous tree, Rusty wires, all the things that can create any sort of mischief) in his premises which if escapes can cause a lot of damages to the people who are living in the surroundings, in these cases burden of proof lies on the defendant as he has to prove in front of the court that what was the need of keeping such things in the premises which are not even required and also where people are working, it can be of great danger for them, all the aspects as to why he is not liable? Why was such a substance kept? Are considered.

Strict Liability is majorly applicable to everybody whether it is an individual or an enterprise involved in such conduct but in India, this strict liability principle is very rarely seen to be applicable in the cases of Individuals. The important requirement is the presence of the person outside the premises where this dangerous product was kept at the time of such conduct, Compensation will be granted only on this basis, and nobody within the premises will get any amount as per this concept.

Strict Liability was laid down in the very famous case of Rylands Vs Fletcher 1868 where the defendant asked an independent contractor to build a reservoir on his land and while such construction was going on contractor found some not in use coal mines but he ignored them and kept on digging the land for converting it into the reservoir, These coal mines were the way to the plaintiff’s place. After the construction was completed because of not closing the path it resulted in the leakage in the plaintiff’s place and destroyed many of the important products.

Defendant gave the argument by saying that it was not me who caused this damage as I was not aware of such a path but the contractor is definitely liable, Court cleared it and come up with this concept where if you are not aware even this will not be counted as an excuse; compensation to the plaintiff was given.

Also in the case of Read Vs Lyons it was declared that the essentials of escaping the dangerous thing from the premises are mandatory.

This is when any enterprise keeps or carries any hazardous activity, knowing about all the aspects of dangers associated with it then if any accident takes place inside or outside the premises, the owner of the enterprise will be held liable to pay compensations for the damage caused, everybody who is affected will be compensated.

Also, it is followed that” the big is the enterprise the big the compensation” it totally depends upon the turnovers of the company that how much will be paid in the form of compensation. As the big amount of money will remain big in the eyes of the smaller companies as it is beyond their capacity but this amount can be less for the firm earning very much or has great wealth. so always the money is decided on the basis of the wealth and capacity to make the payment.

This principle was laid down in the case of MC Mehta Vs Union of India also known as the Oleum gas leak case where the honorable supreme court’s famous judge justice Bhagwati laid down that where an enterprise is engaged in any dangerous activity and causes harm to anybody by the activity going on whether inside or outside the premises it becomes the case of absolute liability of the owner to pay the compensation to the people suffered because of it.

This was further taken up in the case of the Bhopal gas Tragedy where methyl isocyanides got leaked in the city on the night of 2nd and 3rd December from the union carbide carbonate (UCC), a pesticide making company situated in the heart of the city surrounded by thousands of people.

Publicity Liability Insurance Act, 1991states that every owner of an enterprise should take insurance within one year of commencement for the employees handling such dangerous activities. This can be for providing immediate relief in case of death, injury, or damage to a person and also under Sec 2( c)  of this act it was said that Hazardous substances are the one which can cause harm to human beings, other living creatures on the planet, plants, microorganisms, property, and environment. And all the things covered for knowing the absolute liability is handling, manufacturing, packaging, storing, transporting, and treatment procedures. Etc.

EXCEPTIONS TO THE NO-FAULT LIABILITY

Plaintiff’s own fault- If the plaintiff himself goes in the land of the defendant and injures him then this principle will not be considered, he will not get any compensation if he files a suit for damages.

In the case of Pointing Vs Noakes where the horse of a person goes to the fence where the poisonous tree is growing and eats the leaves of such tree and dies then the defendant will not be considered to pay anything as it becomes the case where the plaintiff’s fault is existing.

Act of God- three essentials should be fulfilled in order to make the use of this exception they are, Extraordinary natural force should be there due to which the damage is caused and the event happened should not be foreseen by anyone and depending on the climate, weather and everything of that area and the damages, the act should be without any act of intervention.

In the case of Mahindra Nath Mukherjee Vs Mathuradas Chatturbhuj banner of the cinema hall because of the high wind speed fells on the plaintiff’s building and damages some part of the building, the defendant here took the plea that it was an unforeseen event but the court held that the wind was blowing at the velocity of 27miles per hour which is very natural for the place like Calcutta. Damages were paid by the defendant at last.

Consent of the plaintiff – when the plaintiff has given his consent prior to any such damage and was aware that there is a probability of facing damages that can be caused in the future then it will not be considered.

Example- If Six people are living in the building and the water tank above the building blasts then it will be considered that all the people living gave their consent for such an event.

Act of Third Party- If any act is done by the stranger in the defendant’s land which causes damage to the plaintiff and without the knowledge of the defendant, then-No liability will be awarded.

Statutory Authority- it is the authority derived by any law or any statute, police, Railways, Etc.  Are the examples. it is considered that if something wrong is committed by any such person while exercising his duty for the public then he cannot be held liable.

What is the status of Marital Rape in India?

What are the five types of Writ Petition?

One thought on “PRINCIPLE OF NO-FAULT LIABILITY”