‘NEW’ MAP OF PAKISTAN AND INDIA 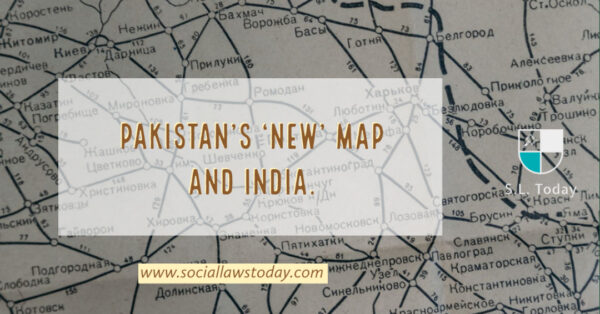 Map of Pakistan and India

Changing maps are trending these days, this year after Nepal, Pakistan followed its footsteps and it is a funny but serious thing.  Pakistan claiming Indian territories even the territories that don’t even share borders with Pakistan. It becomes very convenient to just introduce a new map and boom, the territory now belongs to your country. First Nepal now Pakistan government claimed Indian Territory in their new map. If drawing new maps is enough than why have Militaries? August 5, 2019, the day when India revoked article 370 and Article 35A abolished the special status given to Jammu and Kashmir.

Article 1 (3) of the Pakistan Constitution, states: [Majlis-e-Shoora (Parliament)] may by law admit into the Federation new States or areas on such terms and conditions as it thinks fit.

August 4, 2020, a day before India marks its first anniversary of revocation of Article 370. “This is the most historic day in Pakistan’s history,” said Imran Khan after the Pakistani cabinet approved a new political map of Pakistan.

On August 4, 2020, at the launch of the new map, Pakistan Prime Minister said “the border in that area will be fixed after resolving the Kashmir issue”. Pakistan also claimed the entire territory and water bodies that fall in the Sir Creek region in the westernmost part of India. Why it catches the eye of every Indian is because the step by Pakistani cabinet challenges the territorial sovereignty of India.

Pakistan Prime Minister and Foreign Minister Shah Mahmood Qureshi declared “our goal is Srinagar”. The statement was made on August 4, 2020, when Qureshi along with Pakistan P.M. revels the new political map.

According to the new map of Pakistan, the entire region of Jammu & Kashmir and the edge of Ladakh are part of Pakistan. The new map also claims former princely states and territory, Junagarh and Manavadar. What is stopping Pakistan to mark their claims on other Indian Territory? Like Hyderabad, Bhopal, India needs to worry Pakistan as anything can happen now. Manavadar former princely state joined India of February 15, 1948, and Indian trooped came to Junagarh in September 1948 and became the part of the Indian Territory. Now claiming Junagarh is quite childish because as far as India is concern the Junagarh dispute was settled by plebiscite where approx. 2, 01,500 voters registered, among which only 91 voted to go to Pakistan, this is huge.

At a glance the move made by the government of Pakistan seems unreasonable to everyone, I wonder how they can claim Junagarh, the state that doesn’t even share the borders with Pakistan. This time the new map also marked slightly more distant parts of India as Pakistan’s territory. But never mind this is not the first time when Pakistan is talking unreasonably.

On Wednesday, August 5, 2020, one-minute silence observed across Pakistan as the day observed as ‘youm-e-istehsal’ to express solidarity with the people of “Indian illegally occupied Kashmir (IIOJK)”, facing worst ever suppression and Military siege for the last one year.

The statement also called for the use of IIOJK and not IOJK or IOK. It said that the term used to represent Jammu and Kashmir henceforth should be “Indian Illegally Occupied Kashmir” as opposed to “Indian Occupied Kashmir”. It also added that “illegal action” should be used in place of illegal annexation.

Indian Illegally occupied Kashmir: The government of Pakistan called Kashmir area administered by India as “Indian occupied Kashmir”, now after introducing a new map it is “Indian Illegally occupied Kashmir”, we all know Pakistan’s track record. The cherry on the cake is Pakistan renaming its highway, like seriously! Changing the names of the highway? Indian cabinet needs to learn the easiest way to get more territories and highways. Pakistan renamed the name of ‘Kashmir Highway’ to ‘Srinagar Highway’, but they don’t know this is not getting them the heavenly land of Kashmir. One of the major loopholes from the Pakistan side is confusing at my end, is if the new map already declared that Kashmir belongs to them, then why fluctuating the names of the highways?

Pakistan’s record at the UN has never been hidden. But this time Pakistan’s Kashmir Affair Minister Ali Amin Gandpur seems to be quite serious about giving an ultimatum to UNSC this September to hold plebiscite in Kashmir and if UNSC doesn’t comply, Grandpur threatened to take help of the people, military and political parties. Now, this should concern the UN and India.

For the first time since independence Pakistan has never openly accepted its objective. The official statement by the foreign minister was “For the first time in history, our government has openly presented its stance before the world”. By the statement it one thing is very clear that Pakistan has never cared about Kashmir or Kashmiri people’s right, they were just interested to add on one more territory into their land. Pakistan never intended to make Kashmir an independent country or to support Kashmiri moment, they just want to grab the land of Kashmir and make it the part of Pakistan. As Qureshi said “this map sends a message to India, it sends a message to the unarmed youth of Kashmir who martyrs themselves for the cause, and that Pakistan stands with them. This map represents our goals”. The new map resembles how Pakistan is only determined to face down India and have nothing to do with neither Kashmiris rights nor their development.

The Confederation of Indian Industry (CII) sources told, “The hosting of the JK Investor Summit will provide the state with an opportunity to showcase its strengths, strategies and potential. Participating trade and industry organizations will come to know firsthand about the business friendly policies of the government, assess infrastructure, natural resources, raw material and skill and unskilled manpower available and identify business opportunities in the State. It will present immense opportunities to develop contacts between State and business community and between local and outside business community. For the State like J&K, the Investor Summit will provide an opportunity to allay fear and apprehensions from the minds of outside trade and business community.”

On one hand, we have India who after scraping down Article 370 and Article 35A planned about Kashmir’s development, setting industries there for the betterment of citizens, encouraged private sector investment, and on other hand, we have Pakistan, although it was meant to be a bold move by Pakistan but now it clearly shows the desire of Pakistanis only and not Kashmiris, Pakistan’s intentions are known to everyone, now Kashmiris need to think very cleverly and smartly who is trying to help them? India or Pakistan.

“Every action has equal and opposite reaction”- Albert Einstein.

Everyone knows Albert Einstein and from primary school we all have been learning his three laws. After Pakistan’s action of absurdity it is very natural for India to react on it. Recently on 15th September 2020 Mr. Ajit Doval National Security Advisor of India left the virtual meeting of NSA’s of the Shanghai Corporation Organization (SCO) members after Dr. Moeed Yusuf, Special Assistant on National Security to Pakistan PM Imran Khan projected the ‘NEW POLITICAL MAP’ of Pakistan in the meeting.

Not only Mr. Ajit Doval but every Indian will surely neither will accept nor will forgot the act of ridiculousness by Pakistan.

“Partition is bad, but whatever is past is past. We have only to look to the future.” – Mahatma Gandhi

The roots of Pakistan’s mischievous acts and betrayal can be traced back to the time when on 13 September 1947, Jinnah accepted Junagarh Nawab’s offer of accession. Pakistan’s hypocrisy often makes it very difficult to trust them.

On 2nd July 1972, in Shimla the capital of Himachal Pradesh, the agreement was signed between Indira Gandhi the former Prime Minister of India and, Zulfikar Ali Bhutto former President of Pakistan. The objective behind signing the agreement was establishing peace between both the countries. According to the agreement both countries will “settle their differences by peaceful means through bilateral negotiations”. India has, many a times, maintained that Kashmir dispute is a bilateral issue and must be settled through bilateral negotiations as per Shimla Agreement, 1972 and thus, had denied any third party intervention even that of United Nations. But now Pakistan’s willingness to make China a third party is again breaking an agreement.

Pakistan lost its nerve after what India did one year ago through legislative means, we all know what anyone can do when they lose their nerve, and the pretty new fantasy map of Pakistan is alive and latest example.  Pakistan may redraw maps but before drawing they need some classes to learn ‘how to draw sanely’. Cartographical changes have become the new diplomatic tool for South Asian countries to take on India. I wonder from where our neighbor Pakistan is learning these, from a country that is known to change history, to claim territory in land and in water, China? The new best friend.

Nepotism in India: A Quick Ride

THE ADVERSITY ON TRANSGENDERS AMID COVID-19