ABORTION: A WEAPON AGAINST WOMEN 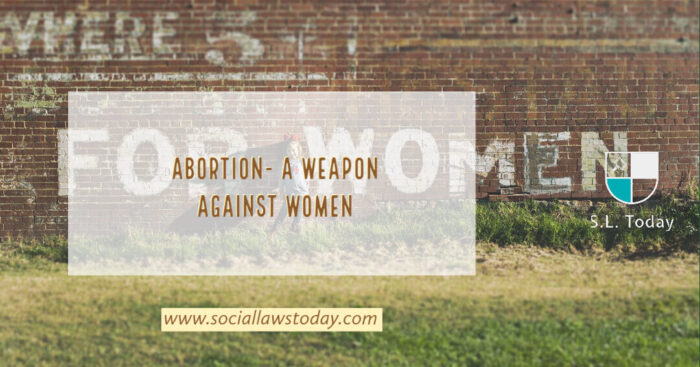 Abortion in India has become a conditional right, since it is offered only to a special category of women like survivors of rape, victims of incest, and other vulnerable women and is not said to be a woman right, instead, the final decision to terminate pregnancy rests with the doctor, and women are asked to bring their spouse or their in-laws for abortion.

In this technological era, India is considered to be one of the most developing nations in the world. But the laws relating to abortion and termination of pregnancy of the women haven’t developed. In this article, the authors analyze various decisions of post-twenty-week cases and examine the current situation and the status of law from a human rights approach. Further, suggests legal reforms to the Medical Termination of Pregnancy Act, 1971 (hereinafter The MTP Act) that accept women as the significant decision-makers over their bodies.

Pregnancy can be terminated by the medical practitioner up to twenty weeks of pregnancy if a woman’s mental or physical well-being is at stake or if the child will have abnormalities when born[1], but if it is necessary to save a women’s life termination of pregnancy beyond twenty weeks, is permitted[2]. And if the pregnancy is terminated by a medical practitioner according to the provisions of the act, he is not guilty of any offense[3]. Thus it is clear that if the practitioner has aborted in good faith under the law then he is exempted from the penalty. Despite this, the practitioners fear for damages under the MTP Act, so women had to obtain legal consent to terminate their pregnancy[4] and court constitutes a medical board that has to produce a report. While this procedure is so vast and stressful there are chances that the health of the woman may take the edge off. The decisions of the court depend on the suggestions given by the medical boards, so the determining factor for the court is the medical board findings and not the woman’s reproductive rights. So the question arises whether the court should merely depend on the medical board reports and shouldn’t the woman’s reproductive autonomy be considered?

Surprisingly, it is not considered! As abortion in India has become a conditional right, since it is offered only to a special category of women like survivors of rape, victims of incest, and other vulnerable women and is not said to be a woman right, instead, the final decision to terminate pregnancy rests with the doctor, and women are asked to bring their spouse or their in-laws for abortion. There needs to be a reform where a women’s choice is recognized. Explanation 2 of section 3 of the MTP provides that a married woman can be granted an abortion if a contraceptive method used by her or her husband has failed. By figuring out a provision only for married women, the Act intentionally precludes unmarried women from accessing abortion services. A woman notwithstanding her marital status could be pregnant either by choice[5], but the act is a barrier as it does not allow abortion for unmarried women. Though the act permits for such abortion when contraceptive fails, in many cases court did not grant for termination of pregnancy[6] which is undesirable as a right to make reproductive choices is a part of personal liberty under article 21 of the Indian Constitution[7].

The above said twenty-week deadline smacks the women with fetal abnormalities when the abnormality is lately brought into light and rape victims where pregnancies are exposed late[8] and Women in rural and poor areas face delay for accessing early abortion as they are not aware of the legal rights and the social stigma that surrounds them, Bihar is one such state where 75% of the women are unobservant that abortion is legal[9]. This is a practical barrier. By review, it is known that the court asks to prove an allegation of rape before permitting for abortion, which causes delay[10] this is a legal barrier. This anathema surrounding abortion has a tumulus impact on women’s health, in taking their decisions on whether to disclose it to others or to have an unsafe abortion and due to this social dishonor, most of the women opt for illegal termination of pregnancy and die due to the unsafe dangerous medical procedures[11].

Additionally, the sanction required from the court for termination beyond twenty weeks is inappropriate as it is a de facto requirement. This third party consent of the court is fruitless as it imperils the woman’s reproductive rights. The MTP Act is ensuring protection to women if the pregnancy goes wrong but is hindering the women’s right to control their own body, fertility, and motherhood at a certain point of time which indirectly is restricting the fundamental right to life. Abortion is a fundamental right to make decisions over her body[12] and the government cannot take the right of the woman of making independent decisions. So the government must protect the woman by removing these obstacles. If a woman abstains to carry on her pregnancy, then coercing her to do so would be an infringement to her bodily integrity and vexes her psychological bruise which would be detrimental to her psychological health[13].In other countries it is said that the decision relating to abortion should exist between the pregnant woman and physician who is treating her, the involvement of courts in this would lead to the violation of woman’s privacy[14] and UNHRC affirmed that abortion is a human right[15] but it is unlike in India.

Ultimately, India is changing in a flash and people’s needs and lives are not akin to what was in the 70s when the MTP Act was passed. So this is the right time that the MTP Act is amended without any delay. There was a recent amendment bill extending the gestation limit from twenty weeks to twenty-four weeks[16], but what if a complication arises after twenty-four weeks? One has to roam around the court like a clock, so the MTP act should be women-centric by providing abortion at any gestational period and strike down the limit in the act. While making amendments the constitutional and human rights should be taken note of. Also, Campaigns should be implemented to create awareness of women’s reproductive rights and to communicate the disgrace and the barriers that women face for termination of pregnancy.  Abortion should be removed from the criminal sphere and be considered as access to healthcare. Abortion is a health concern and not a legal concern, so there should be no judicial requirement in such cases and the act should be amended in such a way that doctors are given guidance for every circumstance and acquire laws that acknowledge and respect the independence of the woman to make decisions on her own body and reproductive health.